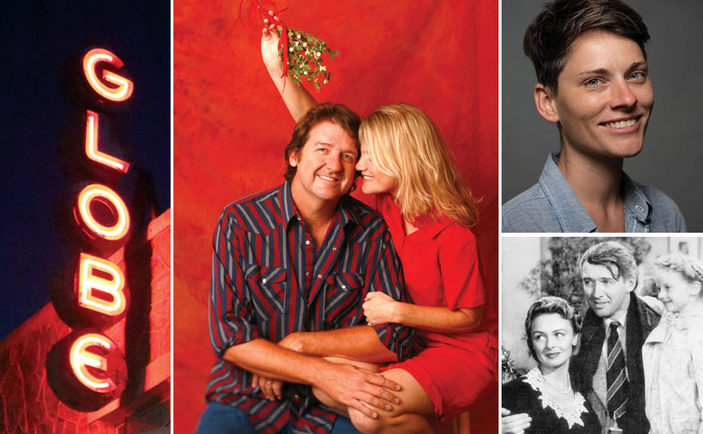 The Globe Theatre in Bertram has a full lineup of holiday entertainment, including live music, comedy shows, and Christmas movies. Staff and courtesy photos

Get ready for belly-shaking laughter, Santa-style, when six comedians take the stage at the Globe Theatre at 8 p.m. Saturday, November 16, for “An Evening With Comedy.” Host San Noorani welcomes Arielle Isaac Norman, Ben Smith, Trumaine Bradley, Ashley Overton, and Norah Franklin to the stage of the historic theater in Bertram.

Austin-based Noorani is a comedian and writer who performs live standup and writes sketches for various troupes.

Tickets for the 18-and-older show are $10 general admission, cash only. Concessions include a cash bar with select wine and beer.

The Globe opened in Bertram in 1935, owned and operated by a group of locals that formed the Bertram Amusement Company. Built of pink granite from Granite Mountain in Marble Falls, the Globe was called the New Theatre when it opened to a full house on August 20, 1935. A contest was held to come up with its current name just a few months later.

The last picture show for about 28 years played in the early 1980s. The building sat unused until it sold in 2009 to current owners Zach Hamilton and Lance Regier. After six years of restoration, the theater reopened in 2015.

A variety of entertainment specials now fill the seats, including comedy, live music, and movies. The lineup for November and December is especially exciting. After the comedy show, here is what you’ll find at the Globe:

TICKETS: $30 for general admission; $40 for mezzanine

Celebrate the 80th anniversary of this classic.

This PG-13-rated movie celebrates 30 years as a Christmas classic.

This animated film is rated G movie for the whole family.

Rated PG, this holiday special has captured the hearts of generations.

You’ll shoot your eye out! Join the quest for an “official Red Ryder, carbine action, 200-shot, range model air rifle with a compass in the stock and this thing that tells time.”

The Globe Theatre is located at 132 W. Vaughan St. in Bertram.