Enchanted Rock screams its tales into the night 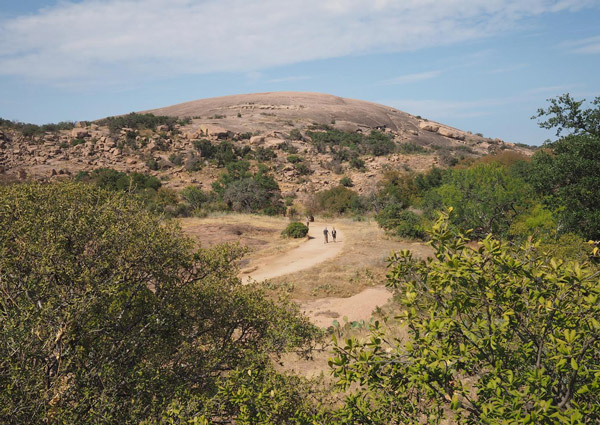 Erupting from the ground in southwestern Llano County and northwestern Gillespie County, Enchanted Rock has drawn visitors for hundreds, maybe thousands, of years. The granite dome is also the place of several legends, including that of ghostly spirits. Native Americans thought spirits inhabited the area after hearing the granite dome ‘moan.’ Of course, that turned out to be the expansion and contraction of the granite from the heating and cooling of the day and night, but it sure sounds ‘enchanting.’ Staff photo by Daniel Clifton

Enchanted Rock screams its tales into the night

FREDERICKSBURG — Jack C. Hays probably thought the legends of Enchanted Rock were true one fall day in 1841 as he did his best to hold off a band of Comanche warriors hunting him among the granite outcropping.

Earlier that morning, Hays, a Texas Ranger, headed out from a camp near Crabapple Creek, where he and about 20 Ranger surveyors had spent the night. Loaded with surveying equipment, Hays was headed for Enchanted Rock to do some surveying but to also climb the granite dome. While for Hays, Enchanted Rock was just that — a rock — to the Native Americans in the area, including the Comanche, it was a sacred site.

So upon seeing Hays with his surveying equipment on sacred land, the Comanche attacked.

Hays, even at the age of 23, knew how tough the Comanche could be, so he climbed to the summit of the rock, hoping to hold off his attackers. At some point along the way, he might have wondered if he would become another legend surrounding the rock.

Enchanted Rock is a place of mystery. Well before Europeans ventured into area, Native Americans such as the Tonkawa, Apache and Comanche revered Enchanted Rock. They saw it as a spiritual place. As early as the 16th century, the Tonkawa heard the creaking and groaning of the granite as rocks shifted or expanded and contracted because of heat and cold changes. They began to believe spirits enchanted the area.

It was a belief to which Native Americans and eventually some settlers clung.

And with good reason.

One story claims an Indian chief, after sacrificing his daughter, was so wracked with guilt that his spirit remains on Enchanted Rock, haunting it. Native Americans and others said the smaller indentations on the rock (vernal pools) are the footprints of his ghost that walk the summit and rock still today.

Then there’s the band of Indian warriors, the last of their tribe, that fled to Enchanted Rock as their attackers pursued them. The brave warriors hid among the rocks and outcroppings, fighting to the last man as the larger band of enemies overtook them.

Legend has it that the ghosts of those warriors haunt Enchanted Rock.

And the screams sometimes still audible at night? Those come from a white woman who escaped from her Native American captors. She, like so many others before her, found cover among all the rocks and crevasses of Enchanted Rock and the surrounding granite outcroppings.

While she was able to evade her captors, the woman couldn’t evade the loneliness and solitude. As the days and nights wore on, the loneliness — maybe coupled with all the other “spirits” crying out in the night — weighed upon her. Eventually, when night fell, the woman began screaming out.

Night after night, the woman screamed. She still screams today, some say. But you’ll have to find that out for yourself.

Not all the legends are terrifying or end badly. In 1750, a young Spanish soldier, Don Jesus Navarro, fell in love with Chief Tehuan’s daughter, Rosa. But this wasn’t quite well received by other Indians, and a band of warriors kidnapped her and stole off with her to Enchanted Rock.

Their plan was to sacrifice her to the spirits of Enchanted Rock.

Navarro, however, loved the woman and pursued her kidnappers to Enchanted Rock.

The warriors’ plan was to burn Rosa at the stake. But before they could carry out their nefarious plan, Navarro swooped in and rescued Rosa from a certainly painful death.

All that probably didn’t matter much to Hays as he saw the band of angry Comanches climbing after him on Enchanted Rock. These warriors weren’t coming to rescue him.

Hays certainly didn’t want to join the other spirits who haunted Enchanted Rock. Fortunately, though outnumbered, Hays had a major advantage over the warriors. He held in his possession at least two Colt revolvers. The Comanches had probably fought white settlers before and were expecting Hays to have the older, single-shot muzzleloader. While the muzzleloader could inflict damage from a distance much greater than their bows and other weapons, the Indians also knew it took precious time to reload between each shot. This gave them an advantage with their numbers.

However, they didn’t know about the Colt revolvers, a recent invention of which Hays was an early adopter.

And Hays used the Colts to his deadly advantage, inflicting a number of casualties upon the Comanches.

Unsure of what they had come across and seeing the damage the Ranger caused on their fellow warriors, the remaining band fled and hid among the granite rocks and outcroppings. The rest of the Rangers arrived to help drive off the remaining warriors, who probably wondered what spirits had joined in Hays’ battle against them.

As for Hays, with the Comanches gone, he climbed to the summit of Enchanted Rock.

Today, whether you cling to the legends and stories, you can explore the labyrinth of Enchanted Rock and climb to the summit. Once there, sit quietly and listen as the spirits share their stories with you.

Enchanted Rock is part of Enchanted Rock State Natural Area, 16710 RR 965 between Llano and Fredericksburg. Entry is $7 for adults and free for children 12 and younger. Due to the popularity of the park, it can fill up on weekends, so call ahead (830-685-3636) to check its status.

Go to tpwd.texas.gov/state-parks/enchanted-rock for more information.