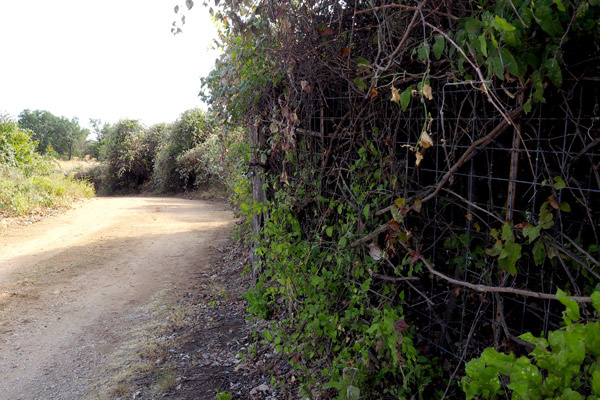 Legend has it that during certain times of the year, people can see the Six Mile Lights near the Six Mile community and Six Mile Creek. Early settlers reported seeing the lights off to the east of an old road that led from Llano to Fredericksburg. Staff photo by Daniel Clifton

LLANO — One night more than 100 years ago, a man traveling between Llano and Fredericksburg on one of the old byways looked to the east of the Six Mile community. With few trees at that time to impede the view, the man noted several brush fires burning off in the distance.

By chance, he came across the owner of the land and inquired about the fires.

The owner, a bit puzzled, asked, “What brush fires? I wasn’t burning any brush.”

“From what I researched, it looks like people began seeing the lights in the late 1800s around there,” said Ray Theiss, who maintains a website called Lone Star Ghost Towns.

The lights, which became known as the Six Mile Lights, have no explanation. And though not as well known as other Llano-area phenomena, Theiss said they have raised the hair on the back of the neck of more than one person.

The Six Mile community, one of Theiss’ “ghost towns,” was established about 1883 and once included a post office, a general store, a Methodist church, a cemetery and even a school.

Six Mile thrived during the Llano County iron boom era with a few nearby quarries. But when the boom ended, the community began to fade. According to Theiss’ research, the post office closed in 1945, by which time, most of the families had also moved on.

The cemetery is still there as is the school house. The road leading to them is only open during the day.

One of the peculiar things regarding the Six Mile Lights, Theiss said, was people only reported seeing them during the fall season.

Located about six miles south of Llano, the area is within the vicinity of Enchanted Rock, another place reported to have interesting “powers.” Maybe there’s a connection.

But as people moved away from Six Mile, the stories began to fade about the lights. Though Theiss, who attended Llano High School, said the stories he heard while at school differ a bit from the original settlers’ tales.

“The story was that there was a couple had been visiting the cemetery one night back in, I think, the ’50s,” he said. “When they were driving out, down Six Mile Road, they were in a terrible accident and died.

“The lights, they say, are the couple walking down the road, holding hands,” Theiss added.

Whether you believe it or not, the Six Mile Lights are another legend and lore that make the Highland Lakes such an interesting place to live and explore.