Ghostly guests remain at The Dabbs Hotel in Llano 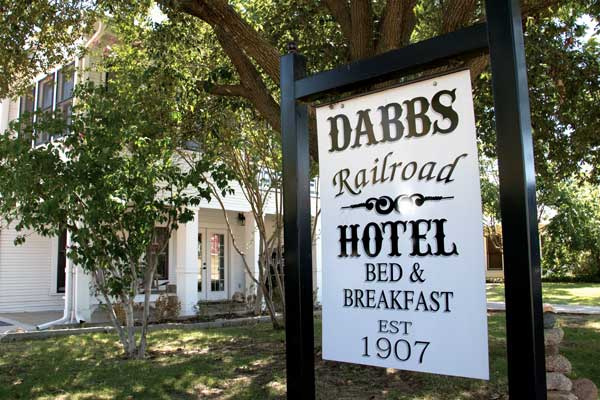 Ghost hunters say a supernatural presence can be found in The Dabbs Railroad Hotel in Llano, something to which owner Gregory Klein can attest. See more photos below. Staff photo by Jared Fields

Ghostly guests remain at The Dabbs Hotel in Llano

LLANO — Gregory Klein wasn't familiar with The Dabbs Hotel's background when he moved into the Llano establishment a little more than two years ago, but it only took a night or two for his supernatural introduction.

Klein was resting in the upper, northeastern bedroom, caught in those moments between wakefulness and sleep when the mind is more open to things not of the physical world. Then, he felt something, another presence, in the room with him.

"This male entity was invading my dream," he said. "He had this real evil look, or energy, about him."

The apparition approached Klein and jumped on his chest. By this time, Klein was fighting both the entity and the need to come out of his dreamlike state.

"He was a tall man but much stronger than me," Klein remembered. "I was really fighting him, but I couldn't get him off me."

To Will Light, a paranormal investigator with more than 40 years of experience, Klein's brush with the supernatural isn’t new. Light has investigated the paranormal at buildings and spots in Texas, Oklahoma, New Mexico, and Louisiana. In June 2015, he and his team from Light Paranormal Investigations and a few other hearty souls spent the night in The Dabbs.

"In my 40 years of paranormal investigating, I had come across maybe one other place that I'd call haunted," Light said. "After the night in The Dabbs, I can say it's definitely haunted."

The Dabbs, established in 1907 as a railroad hotel along the line and the Llano River, has served many a guest. At one time in its history, it even operated as a bordello. And there are reports the infamous Bonnie and Clyde stayed in the hotel.

When Light and his crew arrived, they brought with them a battery of paranormal investigation tools, including a laser setup and sound recorders. Klein said they had several sensors set up around the hotel, all tied to a TV display in one of the main rooms.

"The excitement we had at The Dabbs was amazing," Light said. "We got one of the best pictures we've ever seen."

He described a photo that was taken of a mirror. When it was shot, the photographer didn't report anything unusual about the mirror, but upon reviewing the photos, the crew noticed something disturbing.

"You can see what looks to be someone handing a child or doll through the mirror," Light said. "This was one of the pictures that really knocked me out. Because there is no way to fake something like that."

One of the most active spots in The Dabbs was the main stairs leading up from near the front door to the second floor. The crew set up an array of lasers on the stairs that could detect movement or anything disrupting the rays.

"The stairs were just crazy," Light said. "We had a lot of activity right there. The laser grid, it was constantly going off."

Sometime in the night, one of the crew snapped a photo from an outside balcony that later revealed what appeared to be a woman in a sun hat looking out from inside the hotel.

Light stepped outside onto the balcony, opening and closing the door behind him. But after he shut the door, something opened and closed it again.

"Yeah, there's a lot going on in The Dabbs," Light said.

The investigation included several people not on the crew who wanted to be part of the ghost-hunting experience. Light offers such tours throughout the year. But during a few points in the night, a couple of the people told Light they couldn't spend another moment in The Dabbs.

"It was an amazing night," he said. "To this day, we are still going back and reviewing the material we collected from that night."

As for it being haunted, Light has no doubts.

"I'd say The Dabbs is haunted, not maliciously, but there are spirits there," he said.

But what about Klein's experience?

As the man pushed down on him, Klein struggled and fought back.

"He was much stronger," Klein said. "It was pretty scary because I didn't know if I could get him off. I just kept fighting, trying to yell."

"I managed to get him off me, and I sat straight up in bed," Klein recalled. "That left my heart pounding."

The next night, Klein enjoyed a little wine at a Llano wine bar but also brought back a bottle to The Dabbs. He had an idea about how to deal with this entity. He poured a glass of wine and then just started talking to the man.

"I left a glass of wine for him," Klein said. Since that night, the entity has left Klein alone. "I can't explain it, but that's the last time since I moved in here he's bothered me."

But, of course, Klein doesn't sleep in that room anymore.

Check out Light Paranormal Investigations’ Facebook page for more on Light, his investigations, and upcoming tours or spirit walks. He also offers his service, which remains confidential, to owners of historic houses and buildings or any person who has felt something supernatural in their home or office.

The Dabbs, located on the northern banks of the Llano River, offers overnight and longer stays — no extra charge for paranormal activity.