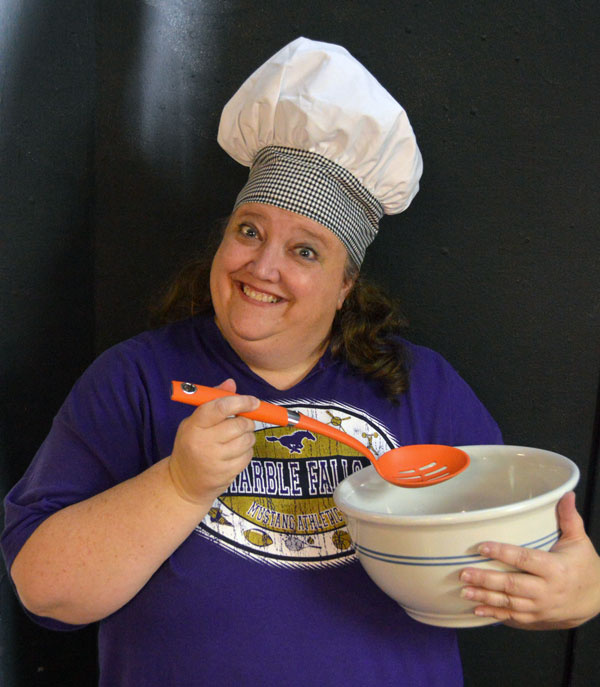 Kay Baker plays Gussie in the Hill Country Community Theatre’s production of ‘Cookin’ with Gus.’ The comedy centers on Gussie’s new cooking show as she discovers she comes down with a bad case of stage fright whenever the cameras start rolling. Gussie’s husband, agent and gypsy neighbor try to get her over her fear through a myriad of ways that result in big laughs. ‘Cookin’ with Gus’ opens Sept. 10 and runs through Sept. 20. Performances are 7:30 p.m. Thursdays, Fridays and Saturdays and 2:15 p.m. Sundays. Go to thehcct.org or call (830) 798-8944 for tickets. Courtesy photo

COTTONWOOD SHORES — One of the hardest things Patrick Lescarbeau faces during rehearsals of the Hill Country Community Theatre’s latest play, “Cookin’ with Gus,” is staying focused on the rehearsals. And being he’s the director, that’s a pretty important part of his role.

But Lescarbeau has a pretty good excuse.

“I’ve been watching this play for two months, and I still laugh until I’m falling out of my chair,” he said. “I’ll have to stop the actors and tell them to go back over what they just read because I didn’t hear it because I was laughing so hard.”

“Cookin’ with Gus,” a comedy written by Jim Brochu, tells the story of Gussie, a famous cooking columnist and cookbook author. Gussie, played by Kay Baker, lands her own TV cooking show, but there’s a problem.

“Anytime she gets in front of a mic or camera, she can’t talk,” Lescarbeau explained. “She’s got this terrible case of stage fright.”

Fortunately, or most likely unfortunately, Gussie has some folks who desperately want to help her. Her husband, Walter, played by Seth Smith, offers hypnotism; her agent, played by Graham Avery, uses threats; and her gypsy neighbor, played by Laura Gisi, casts spells on her. All this, Lescarbeau said, brings about quite a bit of comedy.

And comedy on many different levels.

“The comedy is just incredible from how the characters interact and talk, but there’s also some great physical comedy,” Lescarbeau said.

And while comedy is one of the toughest forms of entertainment to pull off, the four-person cast nails it.

“I think one of the things that makes this play so fun and will be great for the audiences is we all know people like the characters in our own lives,” the director said. “So we can relate so well to them.”

The four-person cast is one of the smaller ones in recent HCCT productions. But it has some definite advantages. For one thing, the cast members started rehearsals right away “off book.” In other words, they knew their lines so well going into the first rehearsal that they didn’t need to hold scripts as they practiced. This, Lescarbeau said, allowed each of the cast members to dig deeper into their characters right from the start instead of spending a week or two getting their lines down. This means stronger characters on the stage.

Plus, with the smaller cast, there’s a more intimate setting during rehearsals allowing the director to work more closely with each cast member as well as the cast developing a strong connection, which comes across on stage.

“But mostly, it’s just pretty funny,” Lescarbeau said. “I don’t think (HCCT patrons) have seen anything like this here before. The cast has done a great job preparing for the play, and, I think, people are going to really love it.”

In fact, within a couple of days of tickets going on sale, two shows sold out. So anybody interested in catching a performance should make reservations soon.

Lescarbeau said he hopes those attending the play will consider getting more involved in the theater.

“We’re always encouraging people who have never been on stage to try it,” he said. “Come on out and give it a try.”