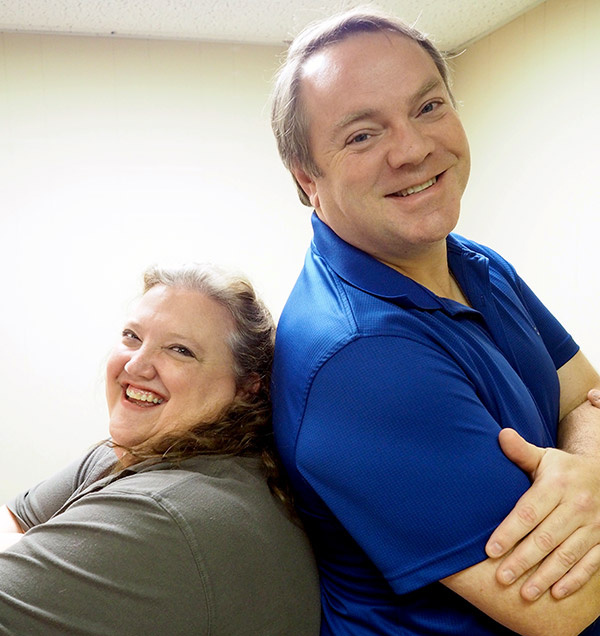 Kay Baker (left) and Seth Smith are hosting the first-ever Hill Country Community Theatre Talent Show. The event is a non-judged opportunity for Highland Lakes residents show off their talents in music, comedy, animal training and more. The show is 7:30 p.m. Aug. 15 at the theater, 2003 RR 2147 in Cottonwood Shores. Tickets are $20 and available by calling the box office at (830) 798-8944. Along with leading the talent show, Baker and Smith are also a part of the cast for the upcoming production, ‘Cookin’ with Gus.’ Staff photo by Daniel Clifton

COTTONWOOD SHORES — While the Hill Country Community Theatre has produced countless musicals, dramas, comedies and mysteries over the past three decades, one thing has been missing.

“This is the first-ever Hill Country Community Theatre Talent Show,” said Kay Baker, a regular to the HCCT stage. “We’re really excited about this.”

“One of the things that’s so great about this is it’s giving people who haven’t been in a play a chance to be on the stage,” Smith said. “We have some great things lined up, from comedy to music. We even have an opera singer."

And to hold it all together, Baker and Smith will serve as the masters of ceremony.

The talent show is a one-night-only event with singing, music, comedy acts — maybe even some magic. So instead of watching a rerun on TV or that YouTube clip for the hundredth time, head over to the theater, located at 4003 RR 2147, for a night of fun, laughter and entertainment.

The acts on Aug. 15 auditioned in July for a spot on the stage. And HCCT Executive Director Mike Rademaekers said the depth of talent here is incredible. It’s that diversity that led HCCT officials to put together the show.

Baker and Smith said they anticipate the talent show becoming an annual event.

In addition to serving as masters of ceremony for the event, Smith and Baker are getting ready for the next HCCT stage production, “Cookin’ With Gus.”

The comedy tells the story of Gussie, a famous food columnist and cookbook author who gets the chance to star in her own TV show. But when she steps in front of the camera, she discovers she has a major case of stage fright. Her husband tries to cure her with hypnosis, her agent threatens her, a gypsy neighbor casts spells on her. When Gussie thinks she has the problem licked, the taping turns into a comedic enterprise that almost ends the show and her marriage.

The four-person cast includes Baker as Gussie, Smith as Walter, Laura Gisi as Carmen and Graham Avery as Bernie.

Go to thehcct.org for more information.