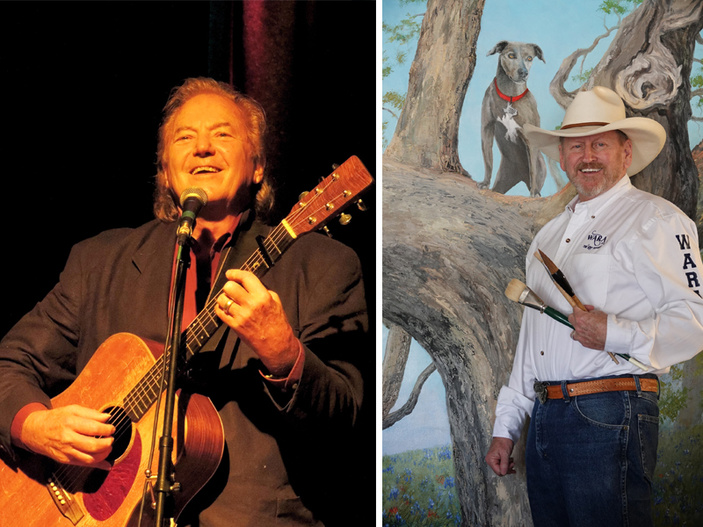 Singer-songwriter Alex Harvey (left) and painter-illustrator Daniel Adams present ‘The Heart of Art in Song’ on Thursday, Oct. 11, at Badu 1891, 601 Bessemer Ave. in Llano. It features music, art, and a dinner. Courtesy photos

Alex Harvey tapped the center of his chest when asked from where his songs and writings come. As a songwriter, few can touch his level of success. Artists of all genres have turned to Harvey with more than 300 million recordings of his songs sold over the years.

Most people probably know his classic “Delta Dawn,” sung by Tanya Tucker, or “Rueben James,” brought to life by Kenny Rogers.But that’s just a small percentage of the songs he has written and the people who have recorded them.

Harvey doesn’t churn out song after song, hoping for one big hit. He has a specific method when he begins writing a song, story, or even poem.

“Anything that doesn’t come from my heart I don’t deal with,” he said as he repeatedly tapped his chest. “I have to talk to the Holy Spirit, and feel it, before I write anything.”

He admitted, even then, that getting the words right takes time and effort. Harvey might write 100 different pieces before he gets two that meet his standards. Those other 98 serve as sketches as he builds upon them to create something better.

Even after decades of writing, performing, and recording, Harvey is still at it with the same love and passion he felt when he wrote his first songs.

After a recent happenstance visit to Daniel Adams Fine Art Gallery in Buchanan Dam, Harvey discovered a like-minded artist — though in a different medium — and a collaborator for a new performance project.

Adams is a world-class painter and illustrator, known for amazing and realistic works. Harvey pulled out a book of his poems inspired by Adams’s art. He turned to a page with a gorilla drawing.

“Look at that,” said Harvey, pointing to the drawing’s detail, right down to the expression on the animal’s face. “It looks like a photograph. (Adams) is amazing.”

As Harvey walked through the gallery that first time, Adams’s artwork connected with him.

“His paintings began to speak to me,” the songwriter said.

One was of a young boy holding two mules ready to head to the field. The boy is facing outward toward the viewer but as if he’s looking down the road for someone, maybe his father.

When Harvey was growing up outside of Memphis, Tennessee, his dad had a mule that he would hitch up to a plow then work the fields. Adams’s drawing of the two mules and the little boy grabbed Harvey’s attention and took him back to those days.

As Harvey continued through the gallery on that visit, other paintings and drawings, 11 of them, spoke to him. Each featured animals. Soon, Harvey felt something in his heart.

“I began writing a song for each of them,” Harvey said. “I couldn’t believe how the songs were rolling out.”

The two artists struck up a friendship. As they talked and shared stories, they came up with an idea for a collaborative project that involved Adams’s 11 pieces and Harvey’s music.

That project grew into “The Heart of Art in Song.”

On Thursday, Oct. 11, the two are bringing their professional talents and works to Badu 1891, 601 Bessemer Ave. in Llano, for an intimate show. They’ll project the 11 paintings and drawings on the wall as Harvey performs the songs written for each. It’s a unique show for both men.

“I’m looking forward to this because I’ve never down anything like it before,” Harvey said.

And that’s coming from a man who has had songs recorded by Willie Nelson, Sammy Davis Jr., Alan Jackson, Jimmy Buffett, Helen Reddy, and other big stars. Harvey is also a trained actor who’s performed in film and television. He studied acting, but some of the best instruction came while shooting “The Long Summer of George Adams” with James Garner. It was Harvey’s first major film, and he was having a hard time during one of the scenes he shared with Garner.

Harvey, however, fumbled through, requiring a second take. Then a third and another. After the shots, Garner called Harvey into his trailer. Garner sat the young actor down and said, quite simply, that his first take is always his best, and Harvey forced him to do several.

“And I never did,” Harvey added.

Harvey began singing at the age of 6 when he and his dad entered a talent contest, performing the tune “Little Brown Jug.” They took third, partly because Harvey really laid into the “ya, ha, ha” part. But it wasn’t easy making his way into music industry.

Billy Edd Wheeler took the young singer-songwriter under his wing. Wheeler wrote the song “Jackson,” which won a Grammy for Johnny Cash and June Carter.

But the teacher-student relationship didn’t start off on the right note. Harvey wrote several songs and gave them to Wheeler, who offered some advice.

“Give up. These are the worse songs I’ve ever read,” Harvey recalled Wheeler telling him.

But he didn’t. Instead, he kept working. It took about 200 songs before he found one that Wheeler would even let him rewrite.Harvey is the first to tell someone you can’t run strictly on talent to make it.

“People say you have to be born with it,” Harvey said. “That’s bullcrap. You have to have drive and work at it.”

And that’s what Harvey is doing. Some people ask why he still writes and performs.

“Because I love it,” Harvey said with a laugh.

As he talked about his music while at Numinous Coffee Roasters in Marble Falls, he grinned, smiled, and slapped folks on the back.

It was in sharp contrast to someone who’s burned out on the profession they’ve chosen. And, as he spoke about his more recent collaboration with Adams and their upcoming show, Harvey’s eyes sparkled like a child waiting to unwrap the biggest gift at their birthday party.

Go to deltadawn.org for more on Harvey and danieladams.org for information on Adams.