Lost and Found: A Tail-Wagging Reunion 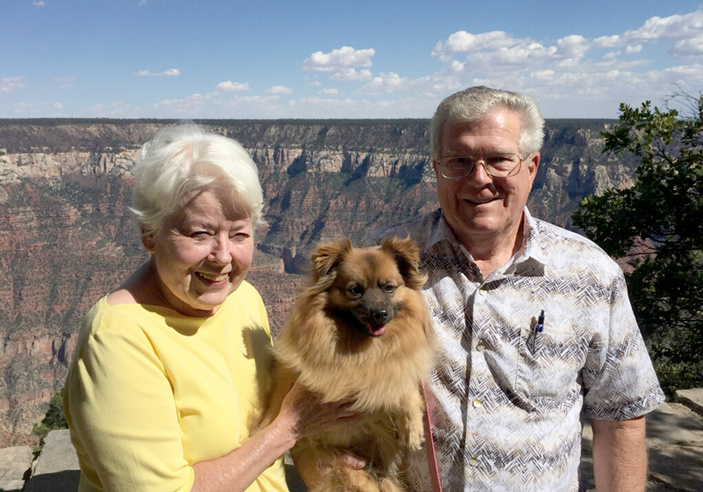 Judy and Don Pullen and Sable at the Grand Canyon days before an auto accident led to Sable being lost for almost three weeks. Courtesy photo

Lost and Found: A Tail-Wagging Reunion

Judy and Don Pullen of Highland Haven still tear up when it comes to Sable, their 3½-old miniature pincher and Pomeranian mix.

On Sept. 27, the trio were involved in a rollover accident near Osborne, Kansas, after an 18-wheeler hit the trailer they were towing behind their truck. Once the trailer began to roll, it took the truck with it.

Judy said all she saw was a “brush of fur go in front of my eyes.” That “brush” was Sable, who turned on the afterburners and disappeared from their lives that day — or so they thought.

“We kept praying someone would find her, some family with children to provide a good home for her,” Don said about the missing dog.

Four years ago, right around the time Sable was born, Judy and Don married. Soon after, Judy expressed her desire to get a dog. Six months later, Don invited her on an outing.

They went to different shelters but zeroed in on a big crate at the then-Christ-Yoder Animal Shelter and Adoption Center in Buchanan Dam. That crate held three dogs: two males and one female from the same litter. Don had said he wanted a female dog and knew immediately when he saw the little brown puppy that she was the one for them.

They returned the next day to complete the adoption.

For Don’s 80th birthday this year, the couple decided to travel across the western United States. They visited Carlsbad, New Mexico, the Grand Canyon, the national parks in Utah, Mount Rushmore, and a quilt museum in Nebraska. They were on their way back home when the accident happened.

“I was not mad at God,” Don said, “but I questioned God. As we’re turning over, I asked, 'God, why is this happening?’ We pray every day for safety.”

After he pushed out the broken windshield and checked on his wife, who was OK, Don began looking for Sable. But she was nowhere to be found.

“(Sable) was so traumatized, no one was going to catch her,” Don said.

“We cried and prayed,” Judy said. “I don’t remember praying this hard. Every day was another day. We were fearful of what might happen to her.”

As the couple walked the highway looking for Sable, people stopped to assist. They were finally convinced to go to a local hospital to be checked out. Then, they rented a hotel room and called a neighbor in Highland Haven for a ride home. That neighbor, Jose Leal, drove all night to Osborne.

After returning home, Judy got on social media, sent emails, made phone calls, and gave media interviews telling people about Sable, even offering a reward for the dog’s return.

Meanwhile, Don kept track of the weather in Osborne and saw rain and freezing temperatures in the forecast. They prayed for Sable’s safety and kept in mind what the experts said: As long as Sable had water, she could survive.

On Oct. 16, the couple returned to Kansas to look for Sable. They were told to bring clothing containing their scent to attract the dog.

They had received a call about a possible Sable sighting. A homeowner described a dog that matched Sable’s description, but her own dogs scared it away.

When the couple pulled into the home's driveway, 30 minutes from the site of the accident, a truck driver followed them and asked if they were searching for a brown dog, saying he saw one about 200 yards from the house.

They went to where the truck driver said he saw the dog. As Judy walked, she began singing Sable’s song to the tune of “Bingo:"

“I saw this little head come up in this ditch,” Judy said. “She had ducked under this fence. She laid on the road and rolled over. She cried, I cried, Don came, and he cried.”

A person helping them search had a can of dog food, which Sable quickly devoured.

“She was a mess,” Don said. “She had muddy dreadlocks and matted hair.”

The couple said they wouldn’t have found Sable without the help of many people. They said families searched for Sable, while others offered to buy them meals and hotel stays. Osborne resident Amanda Payton called Judy every three hours.

“We never gave up hope,” Don said. “The chances were slimmer every day that we’d find her. I have faith in God. I needed to have more faith in God. ”

What a heartwarming story. So glad they found Sable!

I love this story - well, the fact that it has such a happy ending, rather. It makes me tear up. I’m so happy for the Pullens and Sable. Thank you for sharing your story.