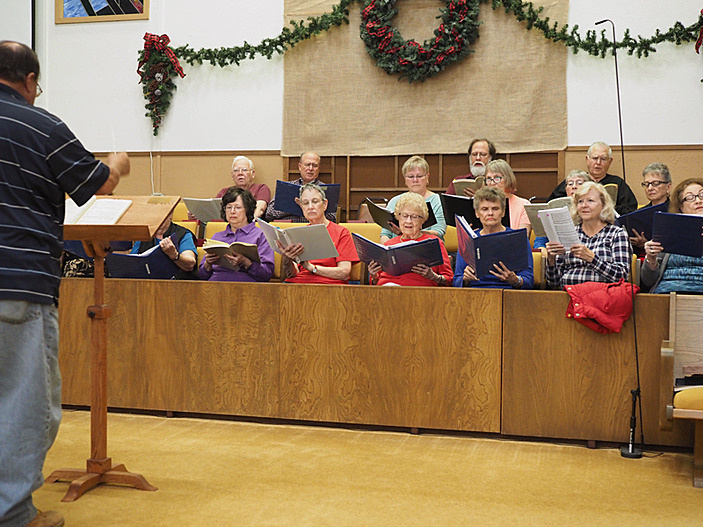 The Highland Lakes Classical Chorus, under the direction of Stephen Gennette, performs Mass in G Major by Franz Schubert at 3 p.m. Sunday, November 17, at First United Methodist Church, 301 E. Graves St. in Burnet. Admission is free, but donations are welcome. The chorus will be joined by organist Scott McNulty and the Highland Lakes Brass Quintet. Courtesy photo

Composer Frantz Schubert’s Mass in G Major was never published during his short but musically prolific life. The piece, which Schubert reportedly wrote in five days in 1815, has become a favorite among chorales, including the Highland Lakes Classical Chorus.

Under the direction of Stephen Gennette, the chorus is performing Schubert’s Mass in G Major at 3 p.m. Sunday, November 17, at First United Methodist Church of Burnet, 301 E. Graves St.

Admission is free, but donations are welcome.

Organist Scott McNulty and the Highland Lakes Brass Quintet are joining the chorus for the performance.

The chorus will sing the “short, energetic” piece in Latin with translations provided for the audience. The performance features soloists from the chorus.

The Highland Lakes Classical Chorus formed in 2018 and is a volunteer ensemble drawing in accomplished singers from across the region. Many sing in church choirs or with other community groups.

A goal of the chorus is to share a love for classical choral music with others. Gennette, the founding director, is a retired public school choir director and a member of the FUMC-Burnet music staff.

Guest organist McNulty is the current director of music and organist for St. Richard’s Episcopal Church in Round Rock. He started playing the piano and organ by ear at the age of 3, following up with formal lessons four years later.

Since then, McNulty has followed music to a career that’s enriched the lives of countless people. He is the former principal organist at St. Louis King of France Catholic Church in Austin, where he created the King’s Concert Music series. He has served several other churches and congregations and is a former director of the Austin Children’s Choir's intermediate choir. He also has served as director of music for 11 years at the Marbridge Foundation, a private residential home for mentally challenged adults located south of Austin. Plus, McNulty has toured across the United States and Europe.

Rounding out the Mass in G Major performance is the Highland Lakes Brass Quintet, a professional group that holds public and private concerts.

Contact Gennette at stephengennette@yahoo.com for more information on this performance or the Highland Lakes Classical Chorus. The chorus welcomes new members.

The concert is part of the Highland Lakes Performing Arts Series presented by FUMC-Burnet.