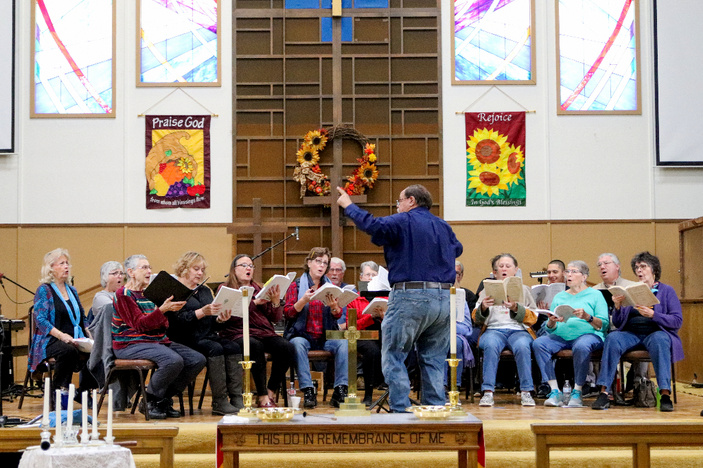 Admission is free, but donations are accepted.

The performance also includes the “Hallelujah Chorus” from the second section of the composition in what will be the first major concert the group has given since 2019.

Formed in 2018, the Highland Lakes Classical Chorus put on four major performances, including “Messiah,” before being shut down by the COVID-19 pandemic.

“We are excited about it because we have some fabulous singers in this area,” said concert coordinator Kristine Robinson. “We have people participating from all over the Hill Country area.”

Robinson is working with conductor Stephen Gennette, the founding director of the Highland Lakes Classical Chorus.

Robinson leads the music staff at First United Methodist Church and performs regularly with the Heart of Texas Orchestra. She plays both the piano and the clarinet and is a retired public school band and orchestra director.

Gennette is a music educator with more than 30 years’ experience as well as extensive work as a baritone soloist. He currently teaches choir at the Burnet middle and high schools. Organist Luciano Laurentiu, who studied piano and organ at Wheaton College and Eastman School of Music, will accompany the choir. A native of Romania, Laurentiu is a recitalist, concert artist, and church musician. He has performed with numerous ensembles and churches in Chicago, where he was based until 2019. Now in the Austin area, he is on the faculty at Greve Opera Academy in Italy.“Messiah” was composed by George Frederik Handel in 1741 and is the German composer’s most famous work. Now 263 years after his death, the Baroque-era oratorio is one of the most frequently performed large works for choirs around the world.

“Messiah” was originally written for Easter but has since become more prevalent at Christmas. The first of the three parts prophesies the birth of Christ.

The second part exalts Jesus’ sacrifice on the cross and includes the “Hallelujah Chorus,” a soaring, joyful piece that inspired King George II to stand through the duration of its first performance in London in 1743. It instantly became a tradition to stand during the singing of the chorus, something many audiences do to this day. The text for “Hallelujah Chorus” comes from the book of Revelation in the New Testament of the Bible.

The third and final part of “Messiah” heralds the resurrection of Jesus.

Though performed before royalty and in the grandest opera houses and music venues around the world, the “Messiah” at First United Methodist Church in Burnet will be an informal affair.

“You don’t have to dress up,” Robinson said. “Just show up. Just come. It’s going to be great!”