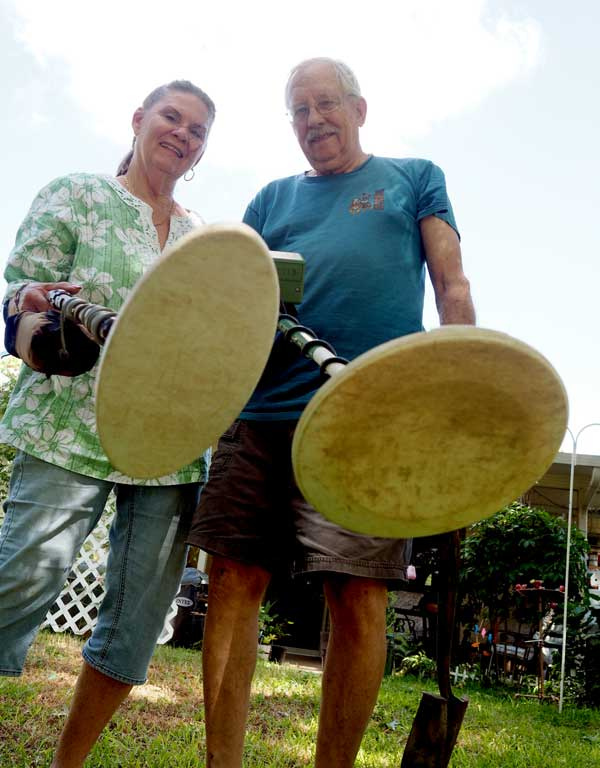 Knox and Karen Graham discovered metal detecting about 15 years ago while living on the Texas coast. Though they haven't struck it rich, the couple loves spending a day outside looking for treasures, which can range from an old metal button to a few coins. They are starting the Highland Lakes Metal Detecting Club to meet other metal detectorists and encourage people to pick up the hobby. The first meeting is at 6:30 p.m. Thursday, Oct. 6, at the Herman Brown Free Library, 100 E. Washington in Burnet. The club will meet the first Thursday of the month. Staff photo by Daniel Clifton

BURNET — The sand was flying from just beyond a dune along the Texas Gulf Coast. Knox Graham knew it was his wife, Karen, causing the commotion, but he couldn't see her, just the sand flying into the air.

"I knew she had found something," Knox said. "With all that sand, it had to be something big."

"Something big" is what every metal-detecting enthusiast dreams about: a bin of gold jewelry or a Civil War cannon buried for the past 100-plus years. So as Knox headed over to see what his wife had found, quite a few things were probably bouncing around in his head.

The Grahams are among the thousands of Americans who head out into the field or water with metal detector in hand. The hobby offers a lot of fun, adventure, and occasionally, some exciting finds.

"But you have to kiss a lot of frogs before you find a prince," Knox said with a laugh.

"It's a lot of fun," Karen said. "And you make some of the most interesting friends in metal detecting."

The couple is hoping to share their love of metal detecting, meet other enthusiasts, and introduce people to this amazing hobby. They are organizing the Highland Lakes Metal Detecting Club, which will meet at 6:30 p.m. the first Thursday of the month at the Herman Brown Free Library, 100 E. Washington in Burnet.

The first meeting is Oct. 6. And everyone, whether you have a metal detector or even know what one is, is invited to attend.

"We've been (in Burnet) for several years, and I would like to find more people who do this and just learn about the areas that you can go and things like that," Karen said. "And it's such a fun hobby, I hope I can get other people involved in it."

Karen picked up her first metal detector 15 years ago after a friend introduced her to the hobby. Like many before her, Karen may have had ideas about striking it rich with some big find, but she quickly realized that was highly unlikely.

And that's OK with her and Knox.

"We've had a great time, just getting outside and exploring," she said.

They've found plenty of items, but nothing that's going to set them up for life — or even through next week. But it's just as much about the search as it is the find.

Some of the most common items are coins, old metal buttons, belt buckles, and things like that. Occasionally, they find something that, well, puts a big grin on their faces.

One of Knox's big finds didn't even set off the metal detector. He found a mastodon tooth while working a beach. When he spotted an odd-looking “rock,” Know knew exactly what it was.

And that's the fun of metal detecting: You never know what you're going to find until you get out there.

"You can find metal detectors at a lot of places, stores," she said.

Some of the devices are hundreds of dollars, even breaking the $1,000 barrier, but she said for people just starting out, there's nothing wrong with a $99 metal detector.

The Grahams have more advanced detectors that allow them to determine the type of metal object below the surface and even "peek" deeper underground. But getting started, they said, doesn't require a major investment.

"It's better not to buy something expensive because you don't know if you'll like (metal detecting)," Knox said.

Finding access to search spots is another challenge, to some degree. Karen and Knox have found several items in their Burnet backyard. But getting out of the backyard means more fun. Karen said many city parks are open to metal detectors, but state and national parks are off-limits unless you get special permission. When Karen is out hitting garage sales, she'll ask the homeowner about coming back and doing some metal detecting on their property.

When Karen finds things on someone's property, she shows it to them in case it’s something they want or holds significant personal value.

The Grahams stress metal-detecting ethics, including covering up all the holes they dig and hauling out any trash items (nails, bottle caps, and the likes) they find.

While hitting it rich is usually just a dream, it sometimes happens. That's one of the things that might have been darting around Knox's head as he came over the dune where Karen was flinging sand.

As Karen dug down, she finally struck her treasure. It was big, bigger than most anything she had found. Were they set for Easy Street with this one find?

"No, it was an old radial tire," she said with a laugh.

"Yep, you kiss a lot of frogs, and that was a big one," Knox added.

Hi Crystal, We would love for you to join us. We meet the first Thursday of every month at the Herman Brown free library are 6:30 in Burnet. If you want more info on the club our the up coming hunt, please call me at 361-232-1092. I'm looking forward to talking with you. Karen

l have bought a metal detector in KingDetector.l find it is very interesting.Could l join you?