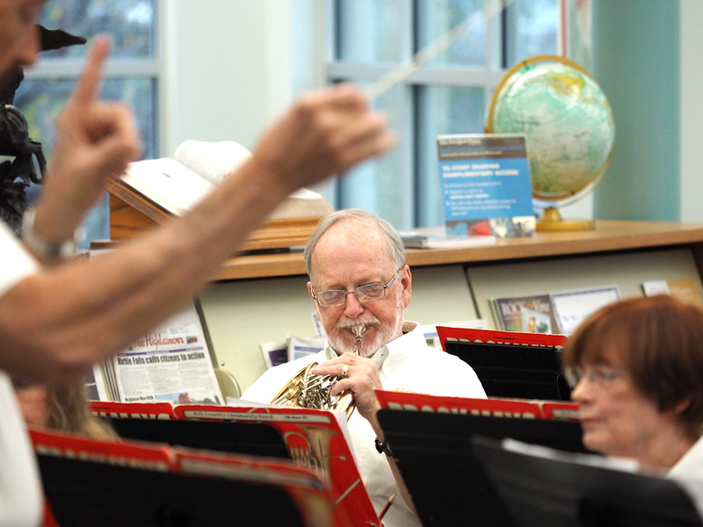 Bern Myers performs during a Hill County Community Band concert last December at the Marble Falls Public Library. The band returns to the library Friday, June 29, for a patriotic concert. If you miss that one, you can catch them July 4 at Lakeside Pavilion for the Marble Falls Community Fireworks show. Staff photo by Daniel Clifton

MARBLE FALLS — If you’re in the mood for patriotic music as Independence Day approaches, as well as on the day itself, the Hill Country Community Band and the Highland Lakes Brass Quintet are ready to give you a big dose of it.

The Hill Country Community Band is a group of 30 or so musicians, all volunteers, who perform several concerts throughout the year across the area, and the Fourth of July season has them practicing patriotic standards. The quintet, a brass ensemble, is a smaller group with a big sound.

“The number one reason we do these concerts is we love to play music and perform for people,” said Joe Mantheiy, a member of both groups. “Performing for people is the essence of what a community band is supposed to do.”

“The Hill Country Community Band has been putting on a patriotic concert around the Fourth of July for about 20 years now at some location around the Highland Lakes,” Mantheiy said.

The Marble Falls Public Library has hosted the concert now for many years, and its popularity has grown as library staff have continued to add chairs for audience members each year.

If you can’t grab a front-row seat, wherever you sit you’ll be able to enjoy the concert as the band’s incredible sound carries throughout the library.

The Highland Lakes Brass Quintet will perform as part of the Kingsland AquaBoom Patriotic Concert on Sunday, July 1, at 6:30 p.m. at First Baptist Church of Kingsland, 3435 RR 1431. Then, on Tuesday, July 3, the ensemble will perform as part of First United Methodist Church of Marble Falls’s Community-wide Patriotic Concert starting at 6:30 p.m. The church is located at 1101 Bluebonnet Drive. Both events are free to attend.

Both the band and the quintet will play many of the traditional patriotic songs, and while many of us know them, Mantheiy said the band brings some different arrangements to several of the pieces.

“Several of the arrangements are very challenging for the musicians,” he added. “But we all love the songs and performing the patriotic music.”

During the Hill Country Community Band’s performances, one of Mantheiy’s favorite pieces is “Armed Forces Salute.” During this piece, the band will play each of the U.S. military branches’ service songs. The band will ask members of the audience who served in each branch to stand when they play those individual service songs.

“We really look forward to these concerts,” Mantheiy said. “They’re a lot of fun, and people enjoy them.”

Call Mantheiy at (830) 385-3641 if you're interested in joining either group or scheduling a concert.