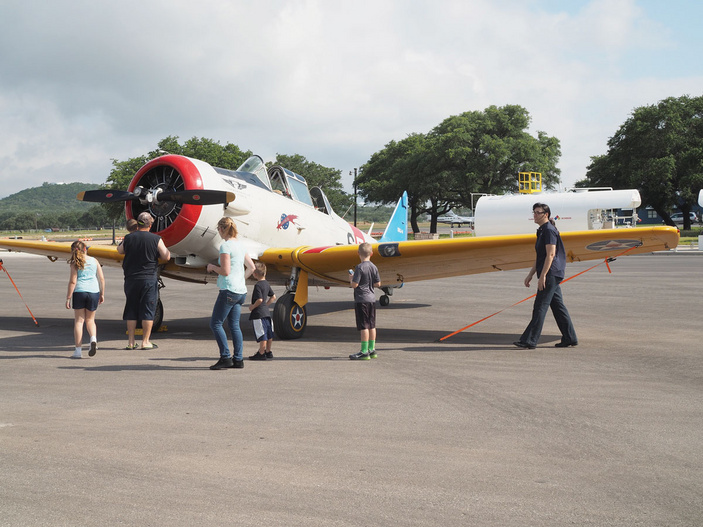 The Highland Lakes Squadron of the Commemorative Air Force is reopening its museum and hangar Saturday, June 27. The squadron’s collection features three aircraft, including a North American SNJ Texan. The museum, located at 2302 S. Water St. in Burnet, is open 10 a.m.-4 p.m. Saturdays and 1-4 p.m. Sundays and Wednesdays. Staff photo by Daniel Clifton

Tom Gordy loves to tell a good story, especially when it involves airplanes and the pilots who flew them.

“I can tell them all day,” he said before posing a question. “Do you know who the first American pilot to come up against a Japanese Zero was?”

He paused before answering: “Cornelia Fort.”

Who is Cornelia Fort?

You can learn more about Fort and other aviation history at the Highland Lakes Squadron of the Commemorative Air Force’s museum, which reopens Saturday, June 27, after being closed for months due to the COVID-19 pandemic. Gordy is a member of the squadron.

It includes the squadron’s hangar, where visitors can check out three aircraft: a North American SNJ Texan, a Fairchild PT-19 Cornell, and a North American L-17 Navion. The squadron’s latest addition, a Douglas C47 Skytrain named the “Texas Zephry” is still undergoing restoration and engine work. The main body of the aircraft is in Brady.

The squadron also holds about 3,000 historic artifacts. Several hundred are on display in the museum building adjacent to the hangar. The collection includes a B-24 tail gunner turret, a Norden bombsight, Link Trainers, uniforms, and photographs.

“We have a real good shell collection as well,” Gordon added, "but it’s not the kind you’d find at the ocean.”

The collection also includes two Japanese battle flags. What makes them unique is when they came into U.S. military hands.

“One of the Japanese battle flags was captured at Guadalcanal,” Gordon said. The Battle of Guadalcanal was fought August 1942 to February 1943 during World War II. It was the first major land offensive by American and Allied forces against Japanese ground forces. “It has to be one of the first flags captured.”

The other Japanese battle flag is from the Battle of Okinawa, which was fought April-June 1945, the last major ground battle of the war. The next major event of the war was the Japanese surrender.

“So, it has to be one of the last flags taken,” Gordon said.

At the museum, visitors can explore artifacts and displays, many of which come with a story. The all-volunteer staff is glad to share those stories and other information.

Gordon recalled a Dallas reporter on his way to San Antonio who pulled into the museum one morning. The reporter only had 15 minutes to spare when he stepped through the doors.

“He ended up having lunch with us,” Gordon said with a laugh.

As for Cornelia Fort, she was a flight instructor who, on the morning of December 7, 1941, was flying with a student out of John Rodgers Airport in Honolulu, Hawaii, when they came across a squadron of airplanes. At first, Fort thought it was a routine flight by the U.S. Army Air Corps. But after one of the planes and hers narrowly missed each other, she realized these weren’t any American but Japanese aircraft headed for Pearl Harbor.

She and her student were able to land their plane and survived a strafing run by one Japanese fighter.

Gordon said Fort later joined the Women Airforce Service Pilots, which shuttled planes around, pulled targets for other pilots for gunner practice, and tested newly overhauled aircraft. Tragically, Gordon said, Fort was killed March 21, 1943, while shuttling a plane to Love Field in Dallas after another plane clipped hers.

“There’s a lot of history we can talk about,” Gordon said.

All people need to do is stop by the museum; just have a little time to spare.

The Highland Lakes Squadron is asking visitors to practice social distancing and take other COVID-19 precautions. They will also limit the number of people in the facility at a time and have implemented “strict environmental cleaning and sterilization protocols.”