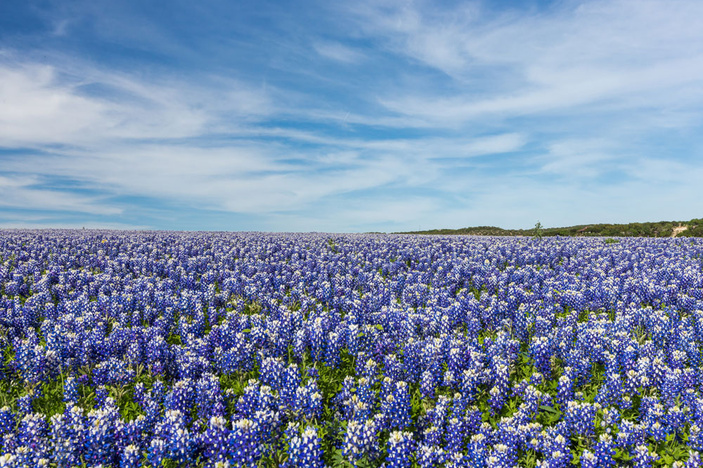 Bluebonnets at their peak during a previous season at Muleshoe Bend Recreation Area in Spicewood. The 2020 season is expected to peak in late March and early April, a bit earlier than usual because of a warm, dry winter.

Highland Lakes bluebonnets are making an early appearance in 2020, already sticking up their heads along Texas 29 between Burnet and Lake Buchanan and RR 1431 between Marble Falls and Kingsland. According to the Lady Bird Johnson Wildflower Center in Austin, this season's crop began earlier than usual and will peak toward the end of March and early April, also a little earlier than usual.

As the blue blossoms begin to fade, other colorful companions will pop up to add to nature's kaleidoscope. Joining the bluebonnets will be golden groundsel, Mexican plum, Texas mountain laurel, and green threads, other early arrivers. (Check out 101HighlandLakes.com’s Wildflower Guide for photos and information on the variety of wildflowers that can be found in Burnet and Llano counties.)

After the bluebonnets go away, keep an eye out for Indian paintbrush, black-eyed Susans, and Texas mountain laurel, which have longer blooming seasons.

Experts at the Wildflower Center predict an overall good year for wildflowers, which will be fed by rains expected in March, April, and May, according to National Oceanic and Atmospheric Administration weather predictions.

“Our springs are rich and long enough for several phases,” said Andrea DeLong-Amaya, the center's director of horticulture. “The suite of flowers you see unfolding at any given time, spring through summer, will provide a new experience.”

For tips on how to take the best bluebonnet photos, whether with a camera or a smartphone, check out our story here.

The Texas Department of Transportation recommends a few safety tips for taking photos of bluebonnets. First and foremost, find a safe place to park and set up your photo. Don’t pull off on the side of the freeway, and don’t trespass on private property.

Other etiquette tips to keep in mind while enjoying this season's wildflowers:

Sit on flowers that have already been flattened.

Finally, it is not illegal to pick bluebonnets as long as they are not on private property. They don’t last long once separated from the earth, however, which should take away any incentive to deprive others of even a single bloom.