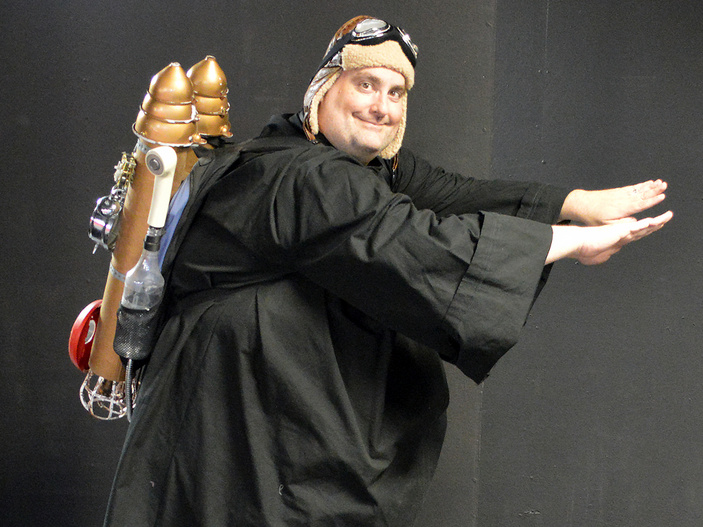 Lew Cohn as Uncle Fester prepares to blast off to the moon in the musical 'The Addams Family,' which runs July 16-Aug. 8 at the Hill Country Community Theatre. Courtesy photo

"The Addams Family" opens a season of musicals and comedies at the Hill Country Community Theatre in Cottonwood Shores. The kooky, spooky, and altogether ooky musical runs July 16-Aug. 8. Performances are 7:30 p.m. Fridays and Saturdays and 2 p.m. Sundays.

Visit the theater's website to purchase tickets or season passes as they become available and to read more about each production.

In "The Addams Family," a grownup Wednesday Addams has fallen in love with Lucas Beineke, a sweet, smart boy from a respectable family. He's a "normal" man whom her parents have never met. If that was not upsetting enough, Wednesday confides in her father that they plan to marry and begs him not to tell her mother.

Gomez must now do something he has never done before: keep a secret from his beloved wife, Morticia. The Addams family attempts to relate to the Beinekes as Uncle Fester conspires with the spooky Addams Ancestors to keep the discouraged young lovers together. Everything will change for the whole family on the fateful night they host a dinner for the Beinekes.

The musical is based on the famous cartoons created by Charles Addams with book by Marshall Brickman and Rick Elice and music and lyrics by Andrew Lippa.

Christine Ashbaugh is in charge of musical direction, and Kristi Stere is the choreographer. The cast is led by Joi White and Jordan Jones as Morticia and Gomez Addams with Lauren Giarratano as Wednesday, Charles McLean as Pugsley, Jacey Lofton as Grandma, Kellen Koch as Lucas, Michael Fox as Mal Beineke, and Faith Trapane as Alice Beineke. They are joined by Lew Cohn as Uncle Fester and Richard Day as Lurch. Victoria Davis, Jackie Flynn, Easton Jones, Madison Puckett, and Alyiah Singleton play the Addams Ancestors. Tickets are $25 for adults and $15 for students and may be purchased online or by calling the box office at 830-693-2474.