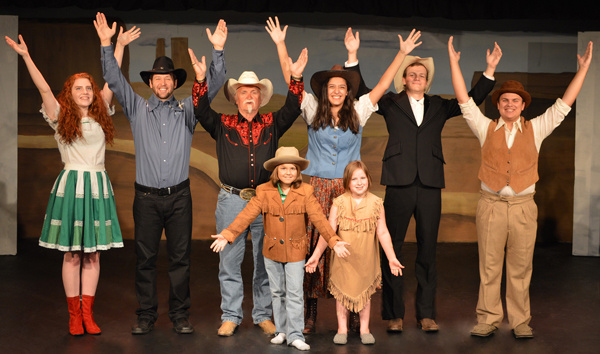 COTTONWOOD SHORES — Director Wendy Ferrell admitted it sounds cliche, but when it comes to describing “Annie Get Your Gun,” she couldn’t help it.

“It’s timeless, even iconic,” said Ferrell, who is directing the Hill Country Community Theatre production that runs July 21-31. “It’s an underdog story, and everyone likes to root for the underdog.”

The musical is based on the true story of Annie Oakley, an American sharpshooter during the late 1800s who joins Buffalo Bill’s “Wild West Show.” Music and lyrics are by Irving Berlin, and the play is written by Herbert and Dorothy Fields.

In the production, Annie falls for a fellow shooter, the dashing Frank Butler. But she quickly begins to outshine Butler, who then leaves the Buffalo Bill show and joins a rival one.

“So it also includes a battle of the sexes, but with some romantic undertones,” Ferrell added. “The show really plays to everyone. Even people who have never seen the show or movie, they know the music. Songs like ‘Anything You Can Do’ and ‘There’s No Business Like Show Business.’”

However, Ferrell knows it’s not enough to be an “iconic” musical with famous songs to draw folks to see it. What Ferrell believes the HCCT production has going for it are the actors, who have really become their roles.

Ferrell said it’s almost as if the cast for “Annie Get Your Gun” was born for each of their roles. Christine Ashbaugh, who plays Annie, owned the part the moment she stepped on stage during auditions and began singing, Ferrell said.

“It’s like that for each of the roles. And we have worked so hard at this play,” the director said. “But the thing is, every one of us is doing this because we love it. And we’re having so much fun. That comes through on the stage, and I believe the audience will definitely pick up on it.”

And that’s one of the things she notices about plays that really go over well with audiences: The cast and crews have a lot of fun rehearsing. Ferrell, who has directed a number of plays at the community theater, said this one just seemed to fall into place so well. And when things have gotten a little off-kilter in rehearsals, stage manger Kay Baker has been there to get the cast and crew back on task — but in a loving way.

Ferrell hopes people who typically don’t go to live productions will show up for “Annie Get Your Gun,” or even another Hill Country Community Theatre production.

“The reason I love this theater is it’s a community theater,” she said. “Everyone who is involved in this show wants to be here. They’re putting their all into this play. And I think if you go here to a play, you realize this and you feel that passion.

“That’s what makes theater, and especially this theater, so special,” Ferrell added. “I think once you attend a show, you’re going to fall in love with theater. Then, we got you.”

Auditions set for 'Don't Hug Me,' a musical love story in the frigid north

The Hill Country Community Theatre is holding auditions for the musical comedy “Don’t Hug Me.” Don’t let the title fool you; it’s a love story.

The play and lyrics were written by Phil Olson, while his brother, Paul Olson, composed the music. Hill Country Community Theatre executive director Mike Rademaekers will direct the production, which runs Sept. 15-25.

Taking place in frigid Bunyan Bay, Minnesota, cantankerous bar owner Gunner wants to move to Florida. His wife, Clara, wants to stay. Bernice, the waitress, wants to pursue a singing career, while her fiancé, Kanute, wants her to stay home. When a fast-talking salesman promises to bring romance into their lives through the “magic” of karaoke, all heck breaks loose.

CLARA JOHNSON: Gunner’s wife. Strong-willed co-owner of a bar called The Bunyan, who’s been married to Gunner for a long time.