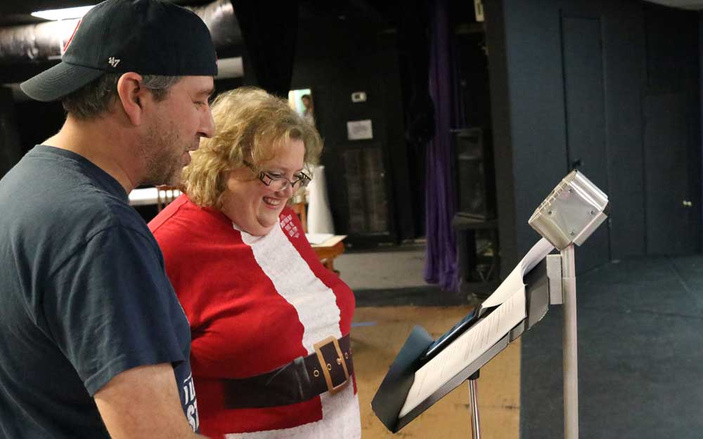 Patrick Lescarbeau and Kay Baker laugh during rehearsal Dec. 11 for the Hill Country Community Theatre’s upcoming production of “Hill Country Christmas on the Air.” The two will be hosts of the show Dec. 17-18, which harkens to the days of live radio broadcasts. Staff photo by Jared Fields

COTTONWOOD SHORES — Christmas is in the air as well as “on the air.”

The Hill Country Community Theatre visits the Christmas past of the 1940s with its production of “Hill Country Christmas on the Air,” a theatrical presentation of an old-fashioned, live radio variety show with Christmas music and a sing-along.

The show is a “pay-what-you-can” event, so no advance tickets will be sold.

“People can come and see what our theater is all about,” said Patrick Lescarbeau, the show’s writer and producer.

He cited stars of bygone days — George Burns and Gracie Allen as well as William “Bud” Abbott and Lou Costello — as inspirations for the production.

The “Golden Age of Radio” began in the 1920s and ended in the 1950s, when television changed the way people were entertained in their homes.

The 1940s are considered the last hurrah of radio, which was used to bolster support for the troops as the United States entered World War II.

Lescarbeau and Kay Baker, co-host of KBEY 103.9 FM Radio Picayune’s “Wake Up Call” morning show, will serve as the masters of ceremonies.

Other performers, some making their theatrical debuts, will be reading scripts as if they were part of a radio show as well as singing Christmas carols and inviting the audience to sing along, too.

“Some have never acted before,” Lescarbeau said about the cast members. “They’ll be reading scripts and performing in front of an audience for the first time. The people moving it along will be Kay and me.”

He wrote the play the weekend of Dec. 2-4. The cast has been rehearsing for the big performance.

“We’re going to get it fine-tuned and ready to go,” Lescarbeau said.