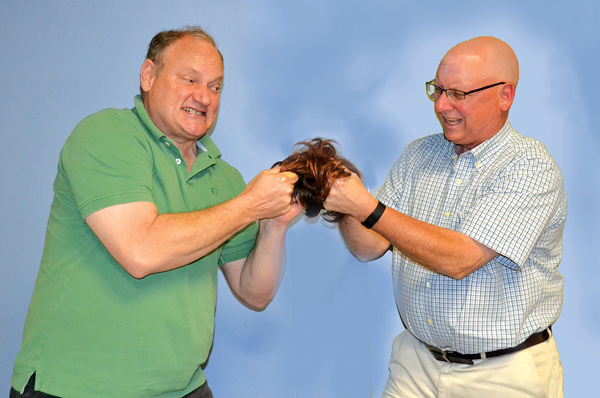 Anson Hahn (left) and Doug Hart find themselves in a tough spot as they share a toupee to impress women but find they landed dates on the same night, making for an interesting evening. The comedic play ‘A Little Off the Top’ hits the stage at the Hill Country Community Theatre on April 21-May 1. Performances are Thursdays, Fridays and Saturdays at 7:30 p.m. and Sundays at 2:15 p.m. Admission is $20 for adults and $10 for students with a valid ID. Call (830) 798-8944, go to thehcct.org or stop by the box office noon-4 p.m. Monday-Friday for tickets or reservations. The theater is located at 4003 RR 2147 in Cottonwood Shores. Courtesy photo by Laura Gisi

COTTONWOOD SHORES — What do two middle-age, lonely bachelors with thinning hair do to attract the fairer sex? Well, if you’re Steve and Jerry, you get a toupee.

Yes, one toupee, because according to Glen Bird, the director of the upcoming Hill Country Community Theatre production of “A Little Off the Top,” it’s the only way they can afford a mop of hair.

“Yeah, so one of them convinces the other to split the cost of the toupee,” Bird said. “It sounds great, at first, but, you know, how can something like that really work out?”

“They’re having girlfriend problems,” Bird said of the two men.

The main problem being that they just don’t have girlfriends. And as middle-age, balding bachelors, the two feel their dating options are limited without some assistance, which brings in the toupee. Things roll right along as the new (shared) hair on their heads garners the attention of two lovely lasses.

All is well, Bird said, until …

“Well, it turns out they both end up getting dates on the same night,” the director said.

So how do the two men manage the night with two women and one piece of hair? While the predicament is serious for Steve and Jerry, it’s something else for the audience: hilarious.

“This is a very screwball comedy,” Bird said. “It’s all over the top (no pun intended — or maybe it was).”

Anson Hahn and Doug Hart play the roles of the love-starved bachelors, Jerry and Steve, respectively. They’re joined on stage by Don Jack as Lewis, Kay Baker as Peggy, April Lyon as Lisa and Sharon Penny as Cheryl. Wayne Hawley and Randy L. Hilmer share the role of Hubert, the toupee salesman.

Bird, who admitted he’s a bit more adept at directing dramas than comedies, believes this one will really get the audience laughing as the two men and their girlfriends spend the night pulling hair.

“As we’ve read through it and rehearsed, (the play has) become funnier and funnier. We find ourselves laughing every time we rehearse,” Bird said. “Then seeing the actors put their spin on it is going to make it one of the funniest shows our audiences have seen in awhile.”