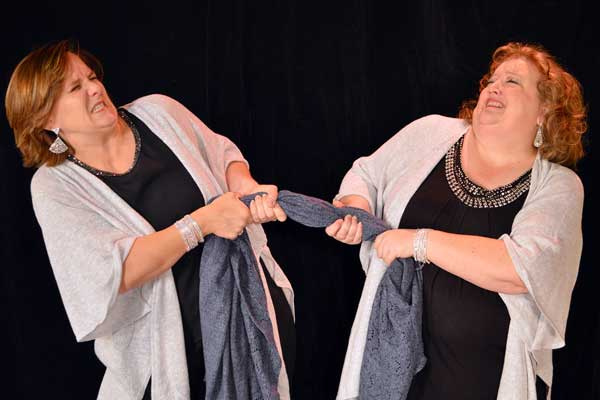 Wendy Farrell as Beth Bailey and Kay Baker as Suzannah Hayden in the Hill Country Community Theatre’s ’Til Beth Do Us Part,’ which runs Nov. 3-20 at the theater, 4003 RR 2147 West in Cottonwood Shores. Courtesy photo

COTTONWOOD SHORES — Featuring a cast that will get audiences laughing, Hill Country Community Theatre’s “Til Beth Do Us Part” is set to open Thursday, Nov. 3, and run through Sunday, Nov. 20.

The comedy, directed by Mike Rademaekers, takes a look at what it’s like to try to get back into the career field after more than two decades away — but without much help on the homefront.

Or, at least not as much as Suzannah Hayden, played by KBEY’s very own Kay Baker, had hoped.

Suzannah and her husband, Gibby, played by Patrick Lescarbeau, have been married for 27 years. Now with their children out of the house, she’s decided to get a career started. Only, Gibby doesn’t offer too much support around the house.

So Suzannah hires help for the house. Enter Beth, played by Wendy Ferrell.

Beth soon becomes a vital part of the household, at least for Suzannah. Suzannah has even given Beth free rein to change things up in the home, much to Gibby’s dismay.

One big change Beth recommends to Susannah is getting rid of Gibby.

But Gibby has also discovered that, as much as Beth seems to support Suzannah, it’s actually his wife’s new career the hired help is after. So with an eye on saving his marriage, Gibby enlists the aid of his wife’s best friend Margo, played by The Picayune/KBEY’s Laura Gisi, and her ex-husband Hank, played by Guy Gober, to help him thwart Beth’s nefarious plans.

It all comes to a head during a dinner where Suzannah’s boss is a guest.

As a comedy, Rademaekers believes it will accomplish its goal.

“We might have to give out tissues for the tears coming from all the laughter,” he said.

Tickets are $20 for adults and $10 for children and students with valid IDs. Reservations may be made by calling (830) 798-8944, going online at thehcct.org, or visiting the box office from noon-4 p.m. Monday-Friday.