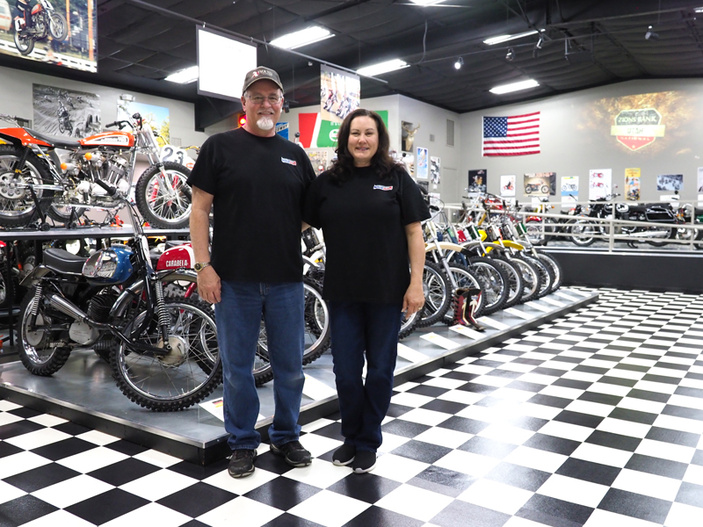 Pat (left) and Janell Hanlon recently opened Hill Country Motorheads, a vintage motorcycle museum, at 2001 Texas 29 in Burnet. The museum includes more than 100 motorcycles and is open 10 a.m.-5 p.m. Wednesday-Saturday. Admission is $7. Ages 12 and younger get in free. Active military members and veterans as well as those 65 years and older pay $5. Staff photos by Daniel Clifton

BURNET — “There are no strangers here,” Janell Hanlon said. “Guys will come in here, they won’t know each other, but after a few minutes, they’ll be sharing and swapping stories.”

Those stories revolve around motorcycles and the adventures people had on them.

That’s what Hanlon and her husband, Pat, wanted when they laid the groundwork for and opened Hill Country Motorheads, a vintage motorcycle museum.

Well, it’s one of the reasons.

“It kind of goes back to the late ’60s, when I started getting interested in motorcycles. It’s ingrained in me, I guess,” Pat Hanlon said.

He and brother Mike, kids in an Army family, bought an “old-school” minibike from White’s Automotive in El Paso. They rode it until it couldn’t take much more then upgraded to a 1971 Suzuki TS90 trail bike.

Then, you might say, it was off to the races. Both boys jumped into the sport of motocross, continuing into the early 1980s. 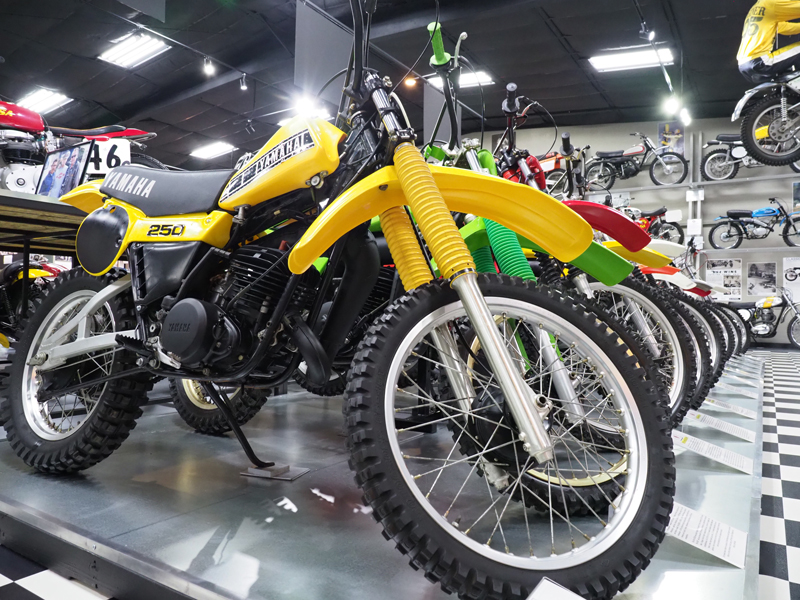 Pat Hanlon, co-owner of Hill Country Motorheads, began riding and racing motocross in the early 1970s. He raced for more than 10 years, and along they way, picked up some ‘extra’ bikes, which turned into a large collection.

“I guess I started getting some ‘extra’ bikes,” said Pat, earning an eye roll from Janell. “I raced motocross for about 10 years in the ’70s and ’80s, that’s when I started collecting, at first, vintage motocross bikes.”

In the 1990s, Pat expanded his collection to include different styles, makes, and models of motorcycles. He has a strong preference for old British bikes.

Once he reached the 100-plus mark in his collection, he started wondering what he should do with them.

Ten years ago, he and Janell began seriously considering opening a museum. Four years ago, they purchased an old car lot and former church building at 2001 Texas 29 West in Burnet. Then, they got to work. 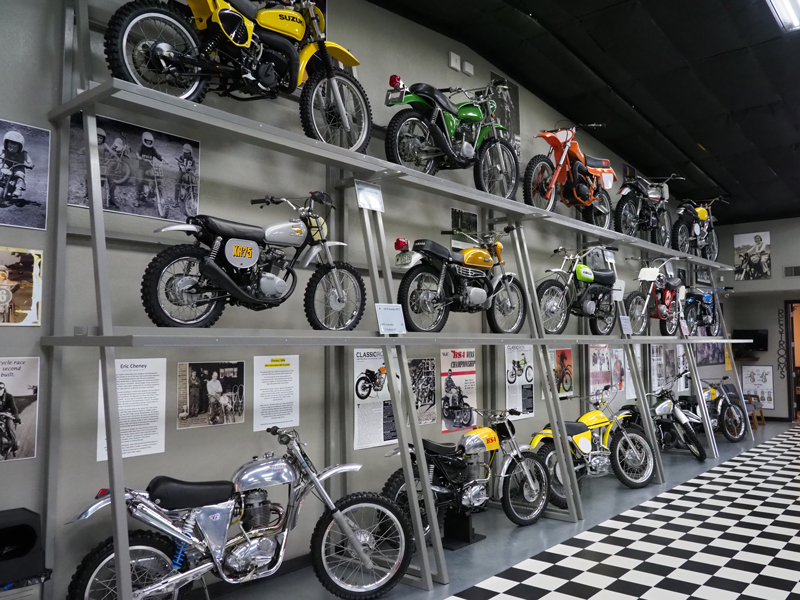 When you have enough motorcycles that you can create a complete wall display of them, it’s time to open a museum.

Be prepared to be awestruck when you walk through the doors of Hill Country Motorheads: The Hanlons have created a vintage motorcycle cathedral. A display of 15 motorcycles set on shelves along a wall ushers you into the main room with its black-and-white checkerboard floor. The rest of the room features reverently placed motorcycles of all makes and models.

It takes a person’s breath away.

The Hanlons went further than just setting out the motorcycles.

“We built it to educate the public, not only on the bike itself but the company that built the bike and the role bikes have played in history,” Janell said.

At the foot of each display is a placard that shares background information about the motorcycle and its manufacturer. For some of the exhibits, the Hanlons added a short biography of someone whose life was closely intertwined with that specific motorcycle, style, or manufacturer.

Even though Pat has ridden motorcycles since his youth, he has learned a tremendous amount about the bikes, the companies that make them, and their influence on society since he and Janell began planning the museum and doing their research.

“It’s been amazing what we learned,” he said. 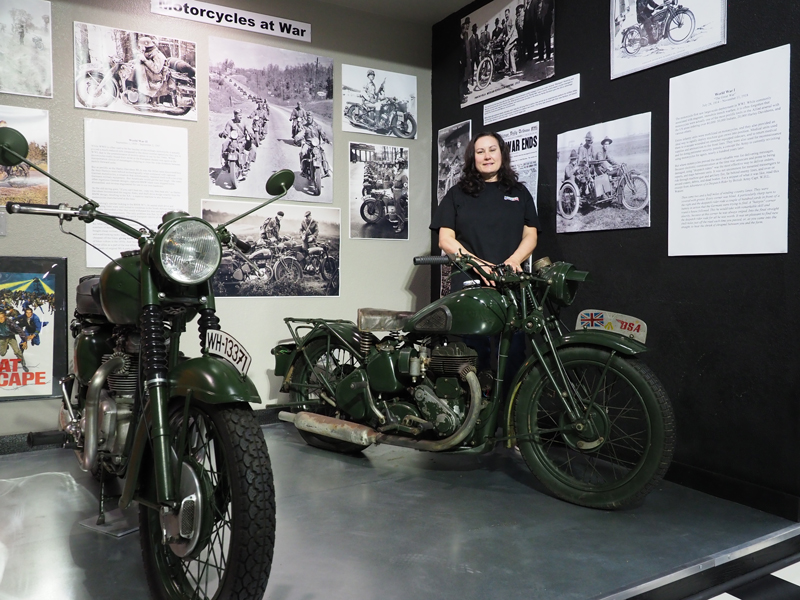 The museum features amazing motorcycles, including a one-of-a-kind chopper and a drag-racing motorcycle highlighted in a racing magazine. However, Janell’s favorite display showcases two drab-green motorcycles. One is a replica of the bike Steve McQueen rode in the film “The Great Escape;” the other is an old British bike used during World War II. They both are tied to the war.

This display describes the role motorcycles and manufacturers played in World War I and World War II. Janell pointed out that while some motorcycle companies continued to make bikes through the war years, and even for the war effort, other firms had to switch to manufacturing other products in support of the military. Some companies, she said, never returned to making motorcycles, while others did.

Two such people are the Van Buren sisters: Augusta (“Gussie”) and Adeline. Chances are you don’t know their names. Janell admitted she didn’t know much about the two until she began digging into motorcycle history and came across the duo.

In the time leading up to World War I, many people didn’t think women could handle tasks typically done by men, including serving as U.S. Army motorcycle couriers. The Van Buren sisters wanted to show the country that women could fill that role, freeing up male couriers to serve in combat.

The two sisters tackled a cross-country ride that started July 4, 1916, in Brooklyn and covered about 5,500 miles before reaching Los Angeles on Sept. 8 of that same year — well before the interstate highway system. The motorcycles they rode were nothing like the ones of today. The Van Buren sisters chose two Indian Powerpluses to carry them on their transcontinental odyssey.

They made the journey, Janell said, but most of the attention was focused on the motorcycles and not the sisters. It didn’t change anything back then, but it was another step toward female equality.

“There’s so much history in motorcycles, people just don’t realize it,” Janell said.

“Motorcycles tell quite a story,” he added. 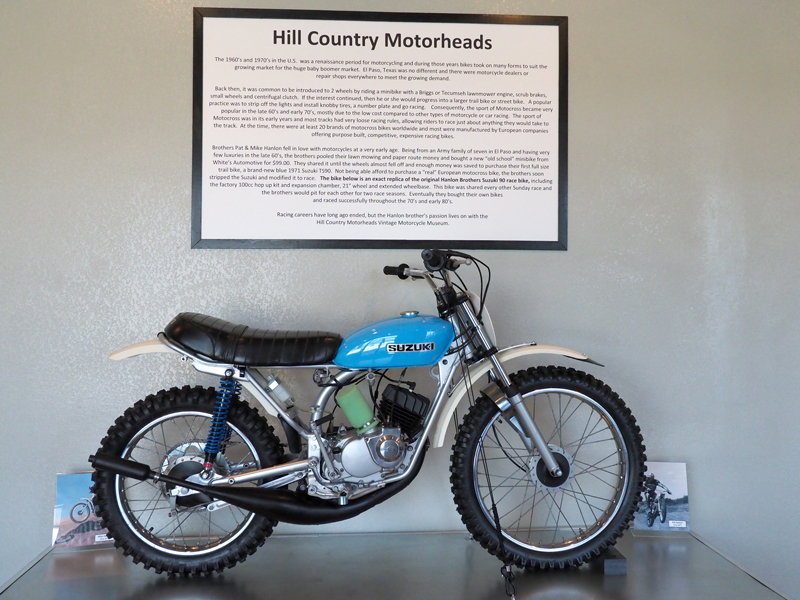 A replica of the Hanlon brothers’ Suzuki 90 race bike.

The motorcycles on display are only part of the Hanlons’ collection (they have about 10 that are on loan). Eventually, they’ll pull a motorcycle here and there and add another, but for now, the display is set.

On each visit, you’re likely to find something new or that you missed during previous stops.

Along with the main museum, the Hanlons created the Man Cave, where folks can hang out, play pool, enjoy a game of cards, catch the game on TV, or just talk motorcycles.

“We see (the Man Cave) as a place riders can come in and rest a bit after being on the road,” Pat said.

“One of the things we want Motorheads to be is a destination,” Janell said. “We really hope this museum draws people to Burnet for the hotels, restaurants, and other businesses.”

Hill Country Motorheads is open 10 a.m.-5 p.m. Wednesday-Saturday. Admission is $7. Ages 12 and younger get in free. Active military members and veterans as well as those 65 years and older pay $5. There’s a discount for groups of 10 or more with each person paying $5.

Go to hcmotorheads.com, check out the Hill Country Motorheads Facebook page, or call 512-553-4078 for more information.