'History of the Vaqueros' at Falls on the Colorado 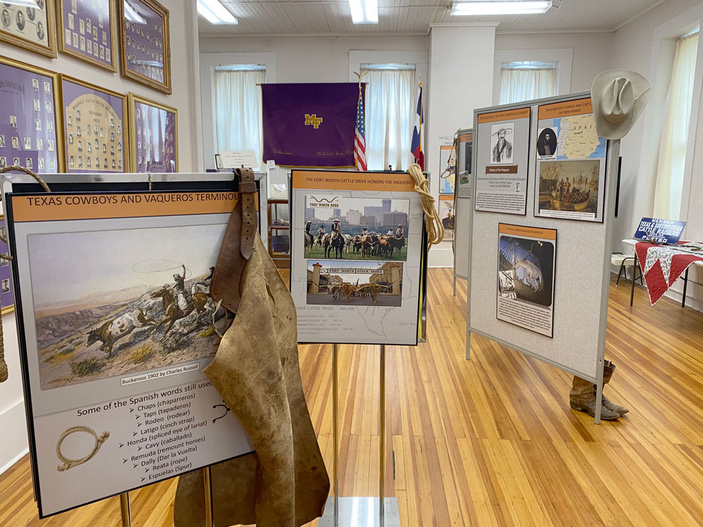 'The History of the Vaqueros' traveling exhibit at The Falls on the Colorado Museum in Marble Falls is available for viewing through the end of July. Courtesy photo

'History of the Vaqueros' at Falls on the Colorado

Explore "The History of Vaqueros" exhibit on display at The Falls on the Colorado Museum in Marble Falls now through July. Authentic items from the museum’s own extensive Ranch Life collection adorn photos and panels outlining the roots of cattle culture still in practice today.

“The exhibit fits in perfectly with the history of our area,” said Robyn Richter, chairman of the museum's board. “Burnet County has a long tradition of cowboys and ranching that’s still alive and well today.” The traveling exhibit was developed by Dr. Douglas Harman, Ph.D., for a Texas Historical Commission program. The research was funded by the Fash Foundation, a Fort Worth-based nonprofit promoting education.

Adorned with chaps, hats, a saddle, ropes, boots, and more, the exhibit tells the story of how Spanish conquistadors — literally mounted soldiers — used their steeds and steel to conquer Mexico in the 16th century. Along with horses, they brought cattle on their ships from Europe and began training the indigenous peoples they found in the New World to ranch.

The vaquero culture that resulted helped settle the American West and create the cherished mystique of the American cowboy still revered today.

The first cowboys, known as vaqueros, were also involved in Texas’ fight for independence from Mexico. You can find out all about it at the museum.

The Falls on the Colorado Museum, 2001 Broadway in Marble Falls, is open 10 a.m.-2 p.m. Tuesday-Saturday. Admission is free; donations are appreciated. Visit the website or call 830-798-2157 for more information.