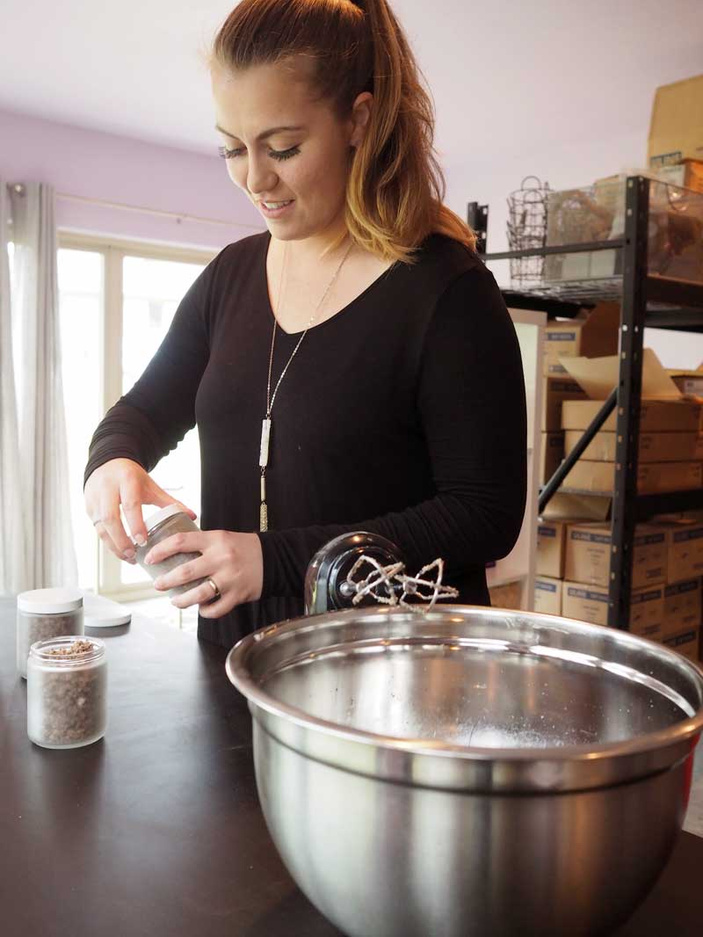 Hannah Starr, owner and founder of HUSH Luxury, works on one of her natural beauty products. She created a line of eco-friendly lotions, scrubs, soaks, and more. Starr is also launching a men's line of products. Go to hushbeautyproducts.com for more information. She will also have a booth at Market Day on Main Street in Marble Falls on March 18. Staff photo by Daniel Clifton

MARBLE FALLS — At 24, Hannah Starr heard many reasons why she shouldn't — or couldn't — start her own natural beauty product business.

She didn’t listen to the naysayers. Instead, Starr followed three simple strategies to launch HUSH Luxury that she believes can help others along their path.

HUSH has only been open one year, but she's already had to find a new location for her warehouse and development because sales have pushed the business beyond its current facilities.

As Starr talked over coffee about her journey from college music major to health and beauty entrepreneur, she spoke quickly as she shared her thoughts.

However, her rapid-fire discussion remained focused.

"I know, I love to talk about his," she said, “but it's something I really believe in.”

Starr created HUSH products to give women — she's also starting a men's line — an alternative to the health and beauty products on the market. She pointed out that though the ingredients in most products are approved by the government, they probably aren't the healthiest.

"It's like when you spray (a disinfectant-type product). Sure, it's supposedly safe, but you breathe that in and it goes into your lungs, your organs, and even your brain," Starr said between a sip of coffee. "It can add up.”

She became interested in natural products after her own health forced her to look at things in a new light. There had to be a better, healthier way to live.

It wasn't just what she put on her skin. Starr began studying health in a holistic manner. While working toward a degree in music at Belmont University in Nashville, Starr added a minor in athletic training. She's now completing her master's in health and kinesiology.

Along the way, Starr studied and became a yoga instructor.

Which brings her to the first strategy: Find something you love.

Some people might say passion is overrated in a career, but when it comes to getting up every day and going to work, having a love for what you do can be a driving force.

Tapping into her passion for healthy living, Starr began making natural health and beauty products. It wasn't always successful, and there were setbacks.

"I was really starting from scratch, and I'd have times when things didn't go right,” Starr said. “It was tough at times."

She eventually got the products how she wanted them, but getting them into people's hands was a challenge. Fortunately, she comes from an entrepreneurial background. Her father, Todd Still, owns Zeecon Wireless and has also started a business or two of his own and reinvigorated a couple more.

Which brings up her second strategy: Surround yourself with people who know more than you do.

"I can take advantage of other people's wisdom," she added. "So, if you're interested in doing something or starting something but don't know all the answers, and you won't, find people who do and ask them."

The help often comes from outside your immediate circle. Last year, HUSH caught the attention of Kevin Harrington, one of the original sharks on “Shark Tank,” an ABC reality show on which aspiring entrepreneurs compete for funding. He and his company are helping Starr launch a national marketing campaign for HUSH.

Of course, it would be easy to chalk up Starr's early success to luck or knowing the right people, but the past 12 months and those leading up to the start of HUSH drew challenges and obstacles. When something didn't go right or, as Starr described, "a door shut," she leaned on her faith as much as anything.

"Yeah, I probably had two or three days of moaning or something, but I always knew that if a door shut, God had another one open for me," Starr said. "I just had to know when to stop banging my head on the closed door and realize this doesn't mean I'm not supposed to do this, but that there was another way to go or try."

The other challenge she said many people face when starting a business is losing focus on what's important. Starr said that had she simply paid attention to how much — or little — money she was making those first months, she could have easily thrown in the towel.

This is her third tenet: Keep an eye on the bigger picture.

"For me, it's about serving others and helping them," she said. "How to positively impact my path and others’ paths.”

The goal of HUSH Luxury is to make natural, eco-friendly, and 100 percent vegan products, so people can gain confidence by feeling good about themselves inside and out. Starr does that through her products while also educating people on health and beauty.

"And education is something nobody can take away from you," Starr added.

Starr said she strives to find better ways to create products as well as help others.

That almost came to a halt when she recently learned she would have to move out of her current warehouse and manufacturing location, where she makes all her products by hand. Starr came across a couple of possibilities, but nothing quite worked. There were times she wondered if she was doing the right thing, but Starr trusted in God, herself, and her products.

She found another location at a new shopping center in Cottonwood Shores, located at 4315 RR 2147.

The center gave her more room for her warehouse and other HUSH needs but also enough space for a yoga facility.

"So, I have a lot of people ask me about teaching yoga, and I have several friends who are looking for work with flexible hours, so, yeah, we're going to open a yoga studio and day spa there, too," Starr said.

She hopes to be in the new site and open for business by early summer. Until then, people can go to hushbeautyproducts.com for more information or to purchase items.

Starr also will have a booth at Market Day on Main Street in Marble Falls on Saturday, March 18.