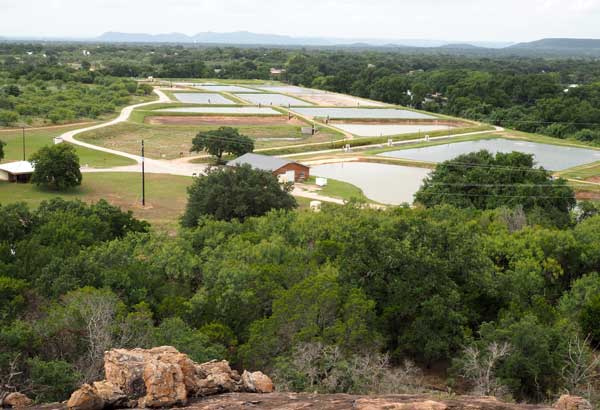 The Overlook Trail at Inks Dam National Fish Hatchery gives people a good look of the facility as well as the surrounding Hoover’s Valley area. The hatchery works with the endangered Clear Creek gambusia, the paddlefish and channel catfish. The channel catfish go to Native American waters to help them develop water resources and recreational activities. Staff photo by Daniel Clifton

All this happens at the hatchery, located on Park Road 4 not far from Inks Lake State Park. And with an activity-filled state park nearby, why would anyone want to stop by a fish hatchery? Don’t they just “hatch” fish?

“Well, the term ‘hatchery’ has really grown into more than fish,” Dorman explained. “Yes, the U.S. Fish and Wildlife Service keeps its focus on priority species as well as sport fishing and hunting, but there’s actually a lot more to what we do.”

“We have hiking, bird watching, fishing, outdoor education …” Dorman said. “We do a lot more than fish.”

The hatchery is open 365 days a year, even on federal holidays. The staff opens the gate at 7 a.m. and closes it promptly at 3:30 p.m. (They start ushering folks out at about 3:20 p.m.) In between those hours, visitors can chose from a variety of outdoor activities.

One of the popular spots is the bird blind. It’s an easy walk from the visitors parking lot, though handicapped people can drive right up to it. You can spend a few minutes or a few hours watching birds come to the feeders and the water. The hatchery offers plenty of opportunities for bird and wildlife watchers.

While the blind is a good spot, Dorman pointed out that people can spot a number of wildlife and bird species along the trails or the lakefront. Oh, did we forget to mention that the Inks Dam National Fish Hatchery snugs up along Inks Lake?

As a birding spot, the hatchery has earned a solid reputation, but it’s also looking to add to it by seeking the Important Bird Area Designation from the Audubon Society. Dorman explained that the hatchery is working with Inks Lake State Park, the Highland Lakes Master Naturalists and other organizations to earn that recognition.

The hatchery, which encompasses approximately 100 acres with 30 dedicated to the actual fish-rearing program, includes several hiking trails. Though not as expansive as its state park neighbor, Inks Dam National Fish Hatchery gives folks a good choice of easy to moderate trails.

The Overlook Trail, which stretches above the hatchery facilities via a granite outcropping, has a great view of the surrounding area, including Hoover’s Valley and Inks Lake Dam. Dorman said that, thanks to the recent rains, vernal pools have formed on the granite, giving rise to small plants and animals — even tiny shrimp-like creatures.

“One of the best things I think a person can do if they really want to see (something) is to just slow down and look,” Dorman said. There’s so much to see, he explained, that we often get so caught up in the “big picture” and miss the details. “Sometimes, you just need to stop and really look, really focus on one small part.

“You’d be surprised what you’d notice,” he added.

Sometimes, it takes a little help to see the things around the hatchery, which is where the educational center and guided group tours come in. The Friends of the Inks Dam National Fish Hatchery arrange and carry out tours for people interested in learning more about the hatchery and the outdoors.

“The tours aren’t just for groups or organizations,” Dorman said. “If you’re having a family reunion, you can come and take a tour. The only thing we ask is that you have at least 10 people.”

The Friends group tailors the tours for each particular group, whether it’s learning about the area birds or the various micro-ecosystems found while traversing the Overlook Trail or developing casting (as in fishing) skills. Along those lines, the hatchery also offers the Hatchery Outdoor Program (HOP) during the spring as 300-500 elementary schoolchildren, along with another 60-plus teachers and adult sponsors, make their way to the hatchery during May to learn about nature and hatchery operations.

“We realize that if we can get a kid out here and just a little excited about the outdoors, they’ll bring their parents back,” Dorman said. “Education and outreach, that’s a big part of our mission.”

Even if you’re just visiting the hatchery during the day, Dorman said if you have a question, feel free to flag down a staff member and ask. Though on weekends and holidays, visitors should have some patience because usually only one staff member is on duty.

The hatchery trail also takes visitors around the holding ponds (you can walk along the banks, but don’t fish them) and down along Inks Lake. Picnic tables sit under mature pecan trees that, during good years, produce a nice crop of nuts for the picking.

“You can fish anywhere along the shoreline,” Dorman said.

But, he added, all state fishing regulations apply.

The hatchery includes a small boat launch for kayaks and canoes. The only word of caution Dorman offered is those hitting the lake need to be back and out of the hatchery by 3:30 p.m. because that’s when staff closes and locks the gate.

All this occurs in the shadow of the important mission of breeding and raising paddlefish, which are a species of concern for the U.S. Fish and Wildlife Service. The Inks Dam National Fish Hatchery staff work with paddlefish found in the Red River and Arkansas River area. Basically, U.S. Fish and Wildlife staff catch paddlefish in those areas, collect the female’s eggs and release her back where she was caught.

Then the hatchery raises the eggs, which eventually become paddlefish fry and fingerlings. Once they reach the appropriate size, Dorman said the U.S. Fish and Wildlife Service releases the small paddlefish back into the area from which their mother was located.

The other critical species the Inks Dam facility works with is the endangered Clear Creek gambusia, a tiny fish found only in a small part of Texas. The problem for the Clear Creek gambusia, Dorman explained, is mosquitofish have worked their way into its habitat and began breeding with the gambusia, thus diluting the pure population.

“Now some may ask why do we care about a fish that’s about an inch long and lives a year or so,” Dorman said. “Well, it’s because it’s an indicator species of the Trinity-Ellenburger aquifer watershed. They’ve evolved in where the aquifer comes out of the ground.

The other major fish project is raising channel catfish for the Native American lakes in Texas, Oklahoma, New Mexico and Arizona. The channel catfish encourage the Tribal Trust partners to develop water resources, Dorman explained, while also offering them an economic benefit through sport fishing and other recreational activities.

The hatchery also contributes catfish to Fort Hood for its fishing spots.

“Nothing goes to waste,” Dorman said.

The hatchery was built between 1938 and 1940 after then-Congressman Lyndon B. Johnson worked out a deal among the Lower Colorado River Authority, the then-U.S. Bureau of Fisheries and the National Youth Administration to construct it. Over the years, it has seen its mission change from providing fish to stocking the young Highland Lakes to its latest objectives involving paddlefish, Clear Creek gambusia and channel catfish. But even that’s just a snippet of the U.S. Fish and Wildlife Service’s overall goal of being stewards of the land as well as its flora and fauna.

As for the Inks Dam hatchery, it includes giving people a place to get outside, learn about the world around them and enjoy the outdoors.

The hatchery is located at 345 Clayton Young Road off Park Road 4 between Hoover’s Valley Road and Inks Lake State Park. Go to fws.gov or call (512) 793-2474 for more information.

And remember to be out of the hatchery by 3:30 p.m. because they do lock the gate.