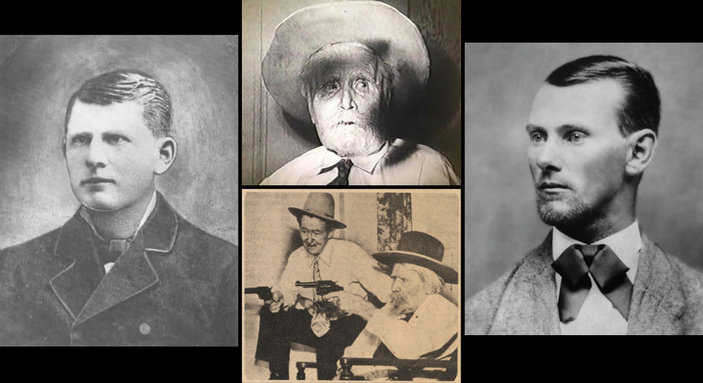 Flanked by U.S. Marshal Frank Dalton on the left and the outlaw Jesse James on the right, J. Frank Dalton (top center) of Granbury, Texas, claimed to have been first the marshal and then the outlaw during his final years. (Bottom center) J. Frank Dalton, 101, in 1948 with Al Jennings, 85, who robbed trains in Oklahoma. The photo is from "Pictorial History of the Wild West" by James D. Horan and Paul Sann, published in 1983. Courtesy photos

The outlaw Jesse James might have lived a short time at the Roper Hotel in Marble Falls. Or, maybe it was Frank Dalton, a U.S. marshal, whose brothers rode with the Cole Younger and Jesse James gangs robbing trains and banks in the late 1800s. Or, maybe he was someone else altogether.

Described as a big man with a gray beard, the stranger registered under the name J. Frank Dalton sometime in the early 1940s. He stayed through a fall and a winter, leaving Room 7 each day to walk downtown and sell war bonds. When he came home in the evenings, other guests gathered around to hear him read his stories, all of which he claimed were true.

The man everyone called Frank kept his handwritten and typed tales in a trunk in his second-floor room at the top of the stairs. Those stories, including “The Civil War and Its Aftermath,” “We Meet the Pinkertons,” and “Belle Starr,” all now reside in the Dolph Briscoe Center for American History at the University of Texas at Austin.

When Dalton eventually left Marble Falls, he left behind his trunk of stories. Hazel Smith Ingram, whose family owned the Roper when Dalton was staying there, eventually donated the trunk’s contents to the Marble Falls library, which, at the time, was run by Marie Ebeling Houy out of a room in the old Masonic lodge. When Houy retired, library staff told her to take the papers with her. In 1979, she gave them to the Briscoe Center.

The trunk also contained invitations to speak at events and love poems to Belle Starr, the Bandit Queen, all addressed and signed by Frank Dalton. 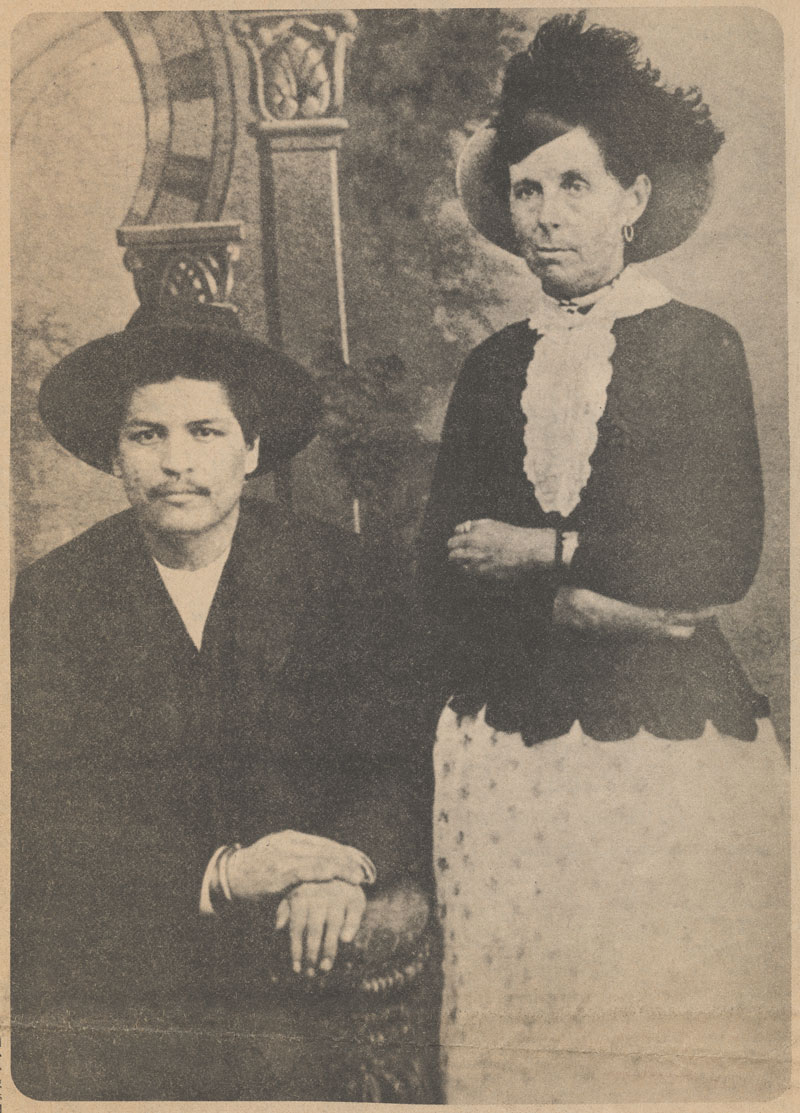 Belle Starr, known as the 'Bandit Queen,' with one of her many lovers, Blue Duck. In manacles, he had just been arrested for killing a farmer. Courtesy photo

The yellowed, typed pages each has the name Frank Dalton in the upper-lefthand corner. Edges are worn from handling, and the typing is edited in places with light pencil marks.

Written in the purple prose of a dime-store novel, the stories sometimes read like fact, sometimes fiction. Most are in first person. The language is brutally racist, and all stories are pro-Confederacy, all protagonists victims of the injustices of Union soldiers. His obvious prejudices might be why the local library wanted no part of them.

In “The Civil War and Its Aftermath,” he begins: “My people were from Georgia, where they had settled during the Revolutionary War.” This story tells of how he and members of his family joined up with Quantrill’s Raiders, also called Quantrill’s Militia or bushwhackers, during the Civil War. (Dalton spelled the name Quantrell.) The bushwhackers practiced guerrilla warfare and were not official Confederate soldiers.

Included in William Quantrill’s gang were the James boys, the Youngers, and the Daltons. According to a PBS documentary, Quantrill taught the up-and-coming gangsters the tactics they used during robberies, so this much at least appears to be true.

“We Meet the Pinkertons” continues a portrayal of reluctant outlaws with hearts of gold. They cornered four Pinkerton detectives who were following them as they rode “to visit our mother and sisters — to see them for the first time since the war closed.” Holding the men at gunpoint, they explained why they would not kill them.

“… This is not the way we do things, so I guess we’ll have to let you go,” the story reads. “You go back to your chief in Chicago and tell him to quit sending men out to hunt us. We are not criminals, but were outlawed at the close of the war for trying to protect our homes.”

A 5,000-word piece on Belle Starr depicts a misunderstood mother and rancher who could do no wrong. He describes each of her multiple men, some she married, some she did not, as unjustly criminalized by war.

According to historic records, Belle Starr was born in Missouri but began her life of crime after the war when she moved to Texas and fell in with the James-Younger gang.

Trained in piano and schooled in the classics, she wore velvet skirts and plumed hats when riding out to rustle cattle and rob trains. Myra Belle Shirley took her famous name from Sam Starr, a Cherokee she met after being chased to Oklahoma by the Texas Rangers. She and Sam were never officially married.

The couple spent nine months in prison for stealing horses, an event that Dalton describes as a misunderstanding between her and a neighboring rancher, whose lost horse looked identical to hers.

Little of what Dalton wrote about Starr resembles historic record. His magnum opus ends mid-sentence as Dalton rides off into the sunset after a short reunion with his one true love. A handwritten addendum reads:

On February 3rd 1889 Belle was shot from her horse and killed. One side of her face was literally shot to pieces by a load of buck shot fired from ambush. Her murderer was never apprehended.

Thus passed from a sad and turbulent life “Belle Starr” on the evening of her 43rd birthday. Some there are who called her an Outlaw, but to me who knew her well, she will ever be remembered as a true, staunch and faithful friend, and loyal and beloved comrade. Just another victim of the grim horrors and unspeakable terrors and hardships of war.

She lies buried in a neglected and weed grown mound near her log cabin home at Briar Town in the wilds of the Old Indian Territory, perhaps a fit resting place for a Pioneer woman of the old — and lawless — frontier.

Rest in peace beloved comrade. Days of hate and strife are over. Rest in peace, ere long I’ll join you on that bright and happy shore.

J. Frank Dalton died in 1951 at the age of 103 in Granbury, Texas. He lived his final years as part of a traveling act — his role to show audiences a maimed finger, rope burns on his neck, fire burns on his feet, and 32 bullet wounds in his chest to prove he was indeed Jesse James.

Dalton’s gravestone in Granbury reads “Jesse Woodson James, Supposedly killed in 1882.” According to historic records, Jesse James was actually killed at the age of 34 by fellow gang member Robert Ford. He is buried in Kearney, Missouri.

The confusion over identity comes from unsubstantiated claims that James faked his death and moved to Texas to live out his life, perhaps spending part of it selling war bonds and spinning tales to lodgers in the Roper Hotel in Marble Falls.

In an attempt to clear the record, both graves were exhumed: James’ in 1995, Dalton’s in 2000. DNA tests proved the remains in Missouri were those of Jesse James. Two bodies were found in the Granbury grave, but only one was tested. It belonged to a man who died in 1927, neither Jesse James nor J. Frank Dalton.

One final problem with the story of the mysterious lodger at the Roper Hotel: U.S. Marshal Frank Dalton, who was never a former bank robber, was killed in the line of duty on November 27, 1887. He is buried in Elmwood Cemetery in Coffeyville, Kansas, where two of his four outlaw brothers also rest in peace.

For more stories from the past, check out the Highland Lakes History Guide.