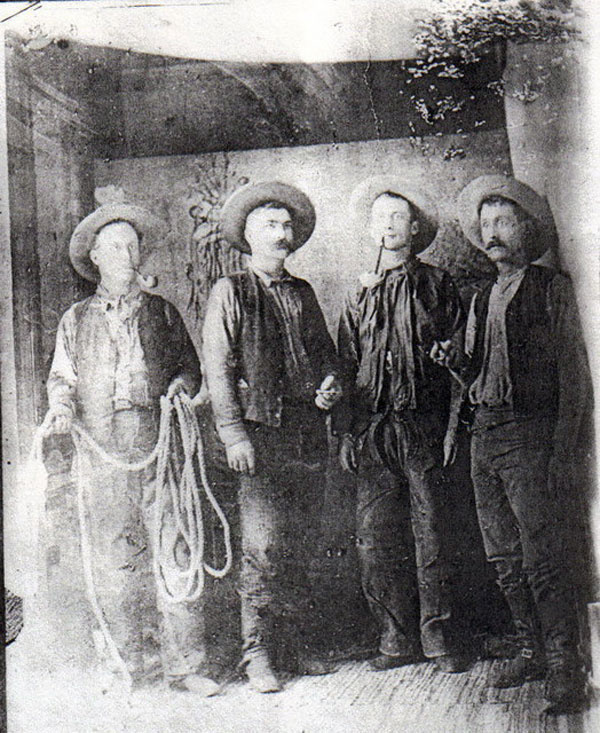 This photo is of four men who were reportedly part of the posse that broke Al Lackey out of the Blanco County Jail on Aug. 26, 1885, and hanged him for the murder of six people. Legend has it that Lackey still haunts the stretch of U.S. 281 between Blanco and Johnson City not far from where he was hanged. Photo from rootsweb.ancestry.com

JOHNSON CITY — Along a stretch of U.S. 281 south of Johnson City toward Blanco, a car rockets along. The driver, nodding his head along with a song on the radio, keeps his eyes on the highway as the sun settles behind the rolling hills to his right. A last dash of sunlight reaches across the landscape and falls upon a man walking beside road.

The man turns and sticks out his thumb.

The driver, not wishing to leave someone stranded at night on the highway, pulls over just past the man. The stranger, the driver notices, is very tall and has a full gray beard to match his hair. He backs up next to the man.

“You need a ride?” the driver calls out.

The man stands there and doesn’t answer.

“Hey, you need a ride?” the driver yells out again, thinking the tall man didn’t hear him.

This time, the man leans down and peers into the car. He stares at the driver.

The stranger’s neckerchief, red with blood, catches the driver’s eyes. He looks at the bandana, back to the man’s face and then to the man’s hand, which is now tucked up close to his chest.

The man holds a knife, covered in blood. He smiles at the driver.

“Six are still living whom I intended to kill,” he says.

But before he can say anything else, the driver throws the car into drive, punches down on the accelerator and races off.

The tall, gray-bearded man stands up and watches the car go. Then as the light slips behind the hills, the figure of Al Lackey fades as well.

Two days of terror in Johnson City in August 1885

The hot Texas sun beat down across the hills near the Pedernales River and Hickory Creek outside Johnson City. With the rumors that had been spreading about him and his teen daughter swirling around inside his head, Blanco County farmer Albert "Al" Lackey climbed up on his horse and rode off to John Green’s home under the pretense of borrowing money. The Greens weren’t home when Al arrived, but he entered the house.

It wasn’t money he was hunting.

Instead, he took John Green’s Winchester rifle, capable of holding 12 rounds, and headed out.

On his own, Al cast an imposing figure. Big by nature and strong by his labor, Al wasn’t a man to trifle with if he came at you with just his hands. But with the Winchester rifle and a vengeance burning deep inside him on Aug. 24, 1885, Al was death cutting through the Texas hills.

Al’s first stop was the home of his brother, Nathaniel Greenberry "Berry" Lackey. He found Berry and his wife at home, and with one shot from the Winchester, killed his sister-in-law. Berry, however, managed to flee, taking off across the land to evade his brother. Upon hearing the gunshot, one of Berry’s sons also ran.

Al chased his brother through the field and trees, eventually cornering him about 100 yards from the house.

Berry’s son, apparently not far off, heard his father beg for mercy.

Al responded with one shot to his brother’s head. He then returned to the house, got on his horse and took off.

Berry’s son, though grief-stricken and scared, headed for help, most likely to Johnson City.

Al continued on, though, pressed by the hatred he felt for members of his family and the community.

People had been saying Al was having improper relations with his teen daughter and, possibly, a step-daughter. He couldn't take the gossip. He had to put an end to it.

He rode off to the home of an older couple, Mr. and Mrs. J.C. Stokes. Here, Al kept up his deadly work, gunning both down with one shot each from the Winchester. He then turned the rifle on the couple’s daughter, Fannie Stokes Lackey, and shot her down. She was the wife of Al’s stepson, Charles.

Then he rode for home.

At his house, Al shot and killed his daughter, Martha. He then turned his attention to his wife, Aley. He pulled the Winchester’s trigger, but nothing happened. As he fumbled with the rifle, which apparently only had six rounds in it, Aley ran. Without the rifle, Al pulled out a knife and chased his wife.

She headed for a nearby creek, every step taking her a bit farther from the horror. But Al kept coming, bent on killing her.

Aley raced through a thicket of trees, her heart pounding and her eyes filled with tears after seeing her own daughter gunned down.

Somewhere in the mess of trees, she threw her husband off her trail.

Whether he was trying to kill himself or throw suspicion off himself, Al took the knife, placed it against his throat and sliced across it. Then, after wrapping a bandana around his neck, he got to his horse, climbed on and headed toward town. Along the way, Al met up with Al Bundick (or Thomas Brunswick, depending on which account you read.)

The two rode a ways together, Bundick unaware of the slaughter. The man noticed Lackey’s bandana but thought it was just red in color, not blood-soaked. During the ride, when Lackey trailed just behind Bundick, the murderer attacked. He lunged at Bundick with the knife, cutting the man several times.

Bundick got away before Lackey could land a fatal blow, but it would be several weeks before the man fully recovered.

Lackey, though, rode for town. About two miles from Johnson City, however, the sheriff came upon him and captured Al without a fight. The sheriff first took him to Johnson City, where a doctor tended to his wounds.

Al apparently tried to claim he was attacked as well, but by this time, his nephew and wife had recounted the day’s events, and the sheriff wasn't falling for the murderer's tale.

After the doctor finished, the sheriff took him to Blanco (the county seat at the time) and put him in jail to await trial.

On Aug. 25, the bodies of Al’s victims were laid to rest.

As word spread about Al’s murderous trail, anger boiled over. This time, it wasn't one man chasing several but a mob of 50-60 hunting one murderer. According to reports, the mob made their way to the county jail after dark on Aug. 26, overpowered the deputies and sheriff and grabbed Al Lackey.

They took the murderer north for about two miles when they came across a oak tree they deemed suitable for hanging.

They made Al stand on a box in the back of a wagon with the noose around his neck. When asked if he had killed everyone he had meant to, he reportedly said, “Six are still living whom I intended to kill.”

He was supposed to jump off but apparently didn’t, and when the wagon moved, Al fell to the end of the rope.

But some say the rope wasn’t strong enough to snap the man’s neck, so instead of dying instantly, Al hung there, strangling for several minutes, maybe longer. The mob, content to let Al suffer for the murders he committed, let him slowly die.

They rode off, leaving the body hanging from the tree.

The tree from which the mob allegedly hanged Al Lackey was next to a road to which U.S. 281 now runs parallel. And since that hanging, people have reported seeing a man hitchhiking along 281 between Blanco and Johnson City, often during the twilight hours. He appears to be wearing a red bandana around his neck. And those who have stopped to give him a ride claim the man is holding a knife.

So if you’re driving between Blanco and Johnson City and spy a tall, hitchiking gray-bearded and gray-haired man with a bandana around his neck, do yourself a favor and don’t pull over to offer him a ride.

You don’t want to be Al Lackey’s No. 7 because it won’t be your lucky number.

(Editor’s Note: Information regarding the murders and what transpired was drawn from a number of old newspaper clippings. Some of the clippings have five victims while others have as many as eight. But six seems to be the most accepted number. The dates of the murders vary as well between Aug. 24 and Aug. 25. But most agree he was hanged on Aug. 26, 1885. Due to the telegraph, the story made headlines around the country for several days including in The New York Times.)

My great grandmother was a Lackey. My mom told us we were related to Al Lackey in some way but not sure how. My Great Grandmothers name was Effie Lackey.

I have always been told we are related to Al and always heard stories about the Lackey hanging tree. Cool story to read but sounds like some terrible times.

Al Lackey was my great great grandfather. The murders came as a shock to many when I learned of them about 15yrs ago. None of my family knew anything about it. My father told me it would make a good movie.

Had a lot of folks grow up in Burnet and Blanco county. Never heard this story growing up but my grandparents were not keen on talking about "haints" (ghost). Very sad but thanks for the story.

I've heard this story growing up. I never really knew how true it is, but I'm a decendant of the family. I'm grateful for more information. Thanks

For anyone who is interested, I have extensively researched the murders (and still am) you can see a bit more information at http://lakeymurders.blogspot.com

My mom's maiden name was Lackey. Al was my great-great uncle. (Maybe not enough "greats")

I've got chills. Dan Clifton, a great piece of history and your research, sources, notes helped you turn it into a fine and macbre account...just in time for Halloween. Thanks for the "treat."