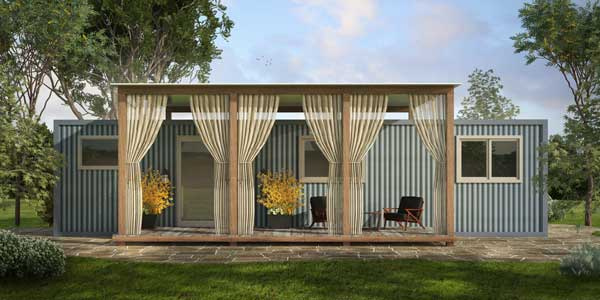 JOHNSON CITY — They come in an array of colors, but green and gray seem to dominate. Plus, after days, weeks or even months at sea, they often don’t look the best in daylight hours — or any time, really.

Kristin Kaiser, owner of Keen Development Group in Johnson City, sees something entirely different. She looks past the utilitarian boxes and envisions what they could become.

And what they look like after Kaiser and her crew are finished with them is mindblowing.

“Especially when you combine all the elements — stick frame with the containers and more — you can really build some amazing things,” Kaiser said. “Anything from a hunting cabin to homes and, yes, even offices.”

Once Kaiser finishes with a cargo container, you can’t even tell it used to be one. Plans feature one or more containers combined with other materials to create unique homes, offices or recreational buildings.

“The demand in Central Texas is huge,” Kaiser said.

And though she’s giving shipping containers new life in the Hill Country, the idea started bouncing around her head when she was working construction in Missouri.

Kaiser is no newbie to construction, development and real estate. She’s been working in the industry for more than two decades.

While in Missouri, she noted the high number of tornadoes and pondered ways to build safer trailer parks. One idea was to use heavy, metal shipping containers.

“But bring a new style to them and the trailer parks,” she said.

But before Kaiser could dive into her trailer park concept, she returned to her home state of Texas. Though she enjoyed the construction side of things, Kaiser wanted to explore design and development.

Using cargo containers for housing isn’t new to Texas. Kaiser said they are often used in oil fields for housing, but with function outweighing style.

She also noted the trend toward “tiny houses,” which are small by traditional home standards, measuring in square feet by the hundreds rather than the thousands.

“But I think they had that idea because they hadn’t worked hard enough to solve the problem,” she said.

Kaiser and her crew came up with a solution, and a little more than two years ago, she began transforming shipping containers into homes, offices and other living areas.

The first one was only a hunting cabin, but it quickly led to bigger spaces.

Kaiser can create pieces that are simple and utilitarian — but still well above an oil-field shed — and also complex homes and offices in which she adds traditional materials such as wood and concrete.

Keen Development even gives an artistic touch to some of its buildings.

Kaiser shies away from describing her work as tiny homes. Though shipping containers can be made into small living spaces, she and her crew also transform them into larger structures.

There are some hiccups here and there. In some communities and cities, officials aren’t quite sure what to make of these structures.

But Kaiser said it’s about showing them a shipping-container home or office can be as amazing as any other style of home.

“One of the things I love about Texas is people are so open to new ideas,” she said. “People really get inspired and aware of what’s going on in the building industry. There are definitely some intricacies to working with shipping containers, but with the things you can do with them, it’s amazing

And as more people catch wind of a simple shipping container’s potential, Kaiser sees more homes and offices, even developments, utilizing them.

While others thought it couldn’t work, Kaiser never doubted herself or her work.

“It never crossed my mind that I couldn’t do this,” she said. “And it’s just as amazing as I thought it would be.”

EDITOR’S NOTE: “Odd Jobs” is an occasional series in The Picayune highlighting unique Highland Lakes businesses and the people running them. If you know of an “odd job,” contact editor Daniel Clifton at editor@thepicayune.com or (830) 693-7152.