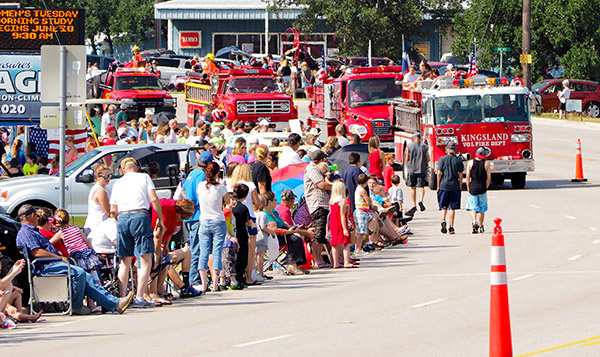 The 2015 Aqua Boom returns July 4 with one of the largest parades in the Highland Lakes. The Aqua Boom Land Parade courses along RR 2900 starting from Packsaddle Elementary School at 10 a.m. Throngs of folks enjoy the parade, which helps get everybody in the patriotic spirit. Staff photo by Daniel Clifton

KINGSLAND — With more than 40 years under its belt, the Kingland Aqua Boom is enjoyed by many generations.

“We have people coming today with their children who came to Aqua Boom with their parents or grandparents,” said Kay Anderson, the Kingsland Chamber of Commerce office manager. “And that’s a great way to show how much this event has become a part of this community and everybody who comes to it.”

Aqua Boom runs July 2-4 with events and activities spread over the three days and across the community. While many people focus on the children’s and land parades on the morning of July 4 and the fireworks later that night, Anderson pointed out the countless opportunities for fun throughout the festival, which all celebrate America's birthday.

“One of my favorite events is the street dance,” she said. “I love going there. You’ll see little kids out there dancing and having a good time. It’s a great family-fun event.”

Plus, nothing says “Texas” quite as much as live music and boot scootin’ on pavement.

The celebrations actually started June 27 with several activities, including the Aqua Boom pageant. But don’t worry if you missed the pageant because you can see the winners during the parades July 4 on RR 2900. One of the things that really sets Aqua Boom apart is the size and scope of the parades.

The parades include children’s and land in the morning with a boat parade later in the day. After all, this is “Aqua” Boom, so Lake LBJ plays a big part in the fun.

While registration for the land parade has closed, Anderson said kids can just show up for the children’s parade. Kids should gather at the starting point near the intersection of RR 1431 and RR 2900 between 8 a.m. and 8:30 a.m. for registration.

Throughout the day, people can enjoy vendors and the craft show, which was moved to Covenant Lane near Windchime Assisted Living to take advantage of the shade.

Anderson pointed out that with so many businesses and organizations stepping up to offer places to hold various Aqua Boom events — from the washer and horseshoe tournaments at Kingsland Community Park to the barbecue cook-off at Lighthouse Country Club — this really is a community event.

“There are people who first came to Kingsland just for this event,” Anderson said. “Many end up coming back at other times because they find they like Kingsland.”

Then, at dark, the Aqua Boom finale erupts over Lake LBJ with the spectacular fireworks display.

“Now, how else do you celebrate the Fourth of July than at Aqua Boom?” Anderson added with a smile.