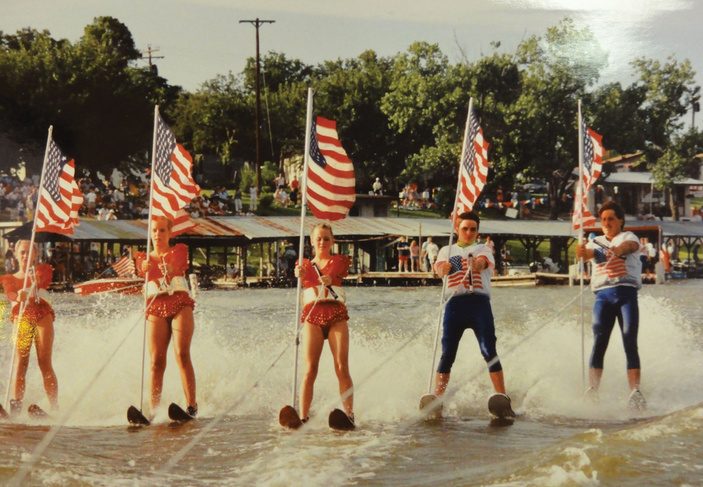 History has a way of repeating itself.

A new bridge over the Llano River in Kingsland connects the small community to thousands of visitors drawn to Lake LBJ for a Fourth of July celebration.

When the first new RM 2900 bridge was completed in late 1968, a small community fireworks display the next summer became instantly more visible and easier to reach. One year later, the event was officially named AquaBoom, and the Kingsland Chamber of Commerce added a river boat parade and an even bigger fireworks display that had spectators covering nearly every inch of land on the banks and bridge to watch.

That first bridge washed away in the October 2018 floods.

It has since been replaced, just in time to cement the connection between vital infrastructure and fun festival: The new RM 2900 bridge was officially named the The Enloe Memorial Bridge by Llano County commissioners. It honors Pat and David Enloe, the late founders of Enloe’s Outlaws ski team, which helped put AquaBoom on the holiday travel road map in the 1980s. He died in 2005. She passed away on June 6 of this year. Daughter Wendy Sue Enloe-Smith, one of the first Enloe’s Outlaws, cried as she watched floodwaters destroy the old bridge on the TV in her mother’s hospital room last year.

“(That bridge) is a gateway to people growing up in this area,” she said. “It’s a gateway of memories, not just for my parents but everybody.”

Enloe’s Outlaws performed during AquaBoom from 1980 to 1992, wowing huge crowds with stunts involving a six-person pyramid, ski jumps, and mixed-doubles routines pulled behind their red boat, the Donzi. Hundreds of area children learned how to ski and properly treat the American flag from Outlaws leader David Enloe.

“My dad had a passion and a love for kids,” Enloe-Smith said. “He taught honor, dignity, loyalty, respect. He was military, very strict, but he played around with the kids and joked, too.”

The Enloes moved to Kingsland in 1973 after building a successful career in water skiing. Enloe-Smith had been skiing since she was 3 years old. By 8, she was on the competitive circuit.

Ron Cunningham, another Enloe’s Outlaw, moved with his family to Kingsland in 1974. His father, Rudy, immediately become involved in the community, serving as justice of the peace and chief of the volunteer fire department. He was also involved with the Outlaws.

As a teen, Ron Cunningham worked at David Enloe’s welding shop, where he learned how to ski jump while helping build the ski-jump ramp.

Training for the Outlaws started in the spring on land in the Enloes’ backyard with ropes tied to trees or a truck.

“Some of those kids had never seen a water ski,” Enloe-Smith said, “so their education had to come from a dry start.”

From land practice, ski team members moved to the water, where they learned how to handle distractions and waves.

“If you’ve got a six-man pyramid, you’ve got to stick it,” Enloe-Smith said. “There’s no falling.” Enloe’s Outlaws built a reputation on Lake LBJ during the 1980s for their precision ski tricks.

“You don’t see that in small towns — that kind of talent and those kind of stunts — anywhere other than a place like Sea World or Busch Gardens,” Cunningham said.

David Enloe suffered a stroke in June 1991 and could no longer drive the boat or hold practices. The show did go on, however, and that year became a favorite AquaBoom memory for Enloe-Smith. She was a high school freshman at the time.

“It was perfect, that show that year,” she said of July 4, 1991. “There was extra adrenaline, and in the back of our mind was ‘We’ve got to do it for David.’ Every act was polished perfect.” 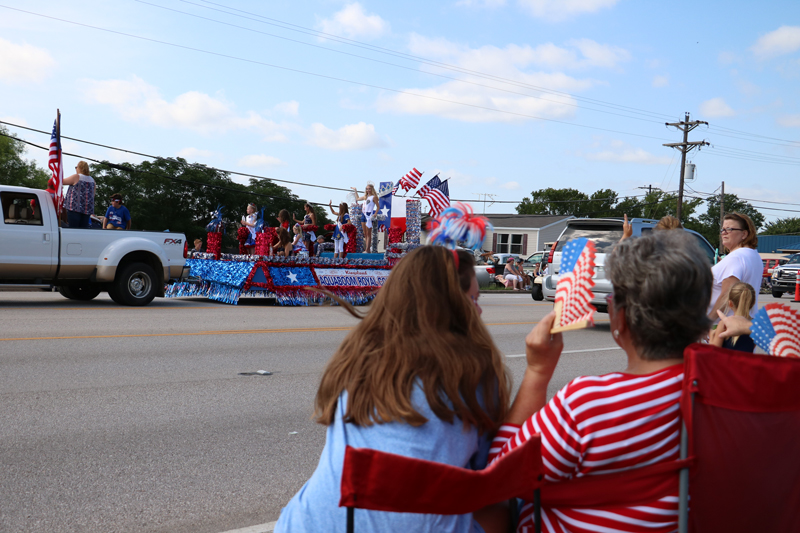 The Kingsland AquaBoom Land Parade has been a fixture of the event since the beginning. The pageant (court’s float shown in background) was added in 1973. Staff photo by Jared Fields

Past AquaBooms created fond memories for participants in other events as well.

“What stands out to me is how involved the community leaders were,” said Bobbie Lou Gray, the first Miss AquaBoom. The pageant was added in 1973. “There were twenty to twenty-five girls in the pageant that year, and they were all sponsored by local businesses. The business community was very much behind the event.”

As part of the Miss AquaBoom court, Gray waved greetings from a float in the lighted boat parade and watched the entire community on the shores waving back.

Seeing the crowds was an experience, Enloe-Smith recalled.

“You couldn’t see the buildings, just bodies,” she said.

People continue to flock to AquaBoom with crowds numbering as high as 30,000. This year’s event could be as large as any of the previous 49, but no one wants to venture a guess.

“It’s so huge, I have to say I haven’t really even bothered to wonder how many people are coming,” said Kingsland AquaBoom President Wendy Taylor.

With the timely opening of the new Enloe Memorial Bridge, a vital lifeline to the community has been restored and the 50th AquaBoom is on track to be another memory-making July 4 celebration on par with those of the past. There will even be a ski tribute to the Enloes by past Enloe's Outlaws. It will begin at 6:30 PM after the boat parade.

“I’m excited for the AquaBoom and hoping it’s bigger and better than it’s ever been,” Cunningham said.

Kingsland celebrates the Fourth of July over several days. The extended schedule is jampacked with festive events, including land and boat parades, a scholarship pageant, a golf tournament, cook-offs, and fireworks.
Highlights from this year’s schedule include: Kingsland AquaBoom takes place across Kingsland and Lake LBJ. Visit kingslandaquaboom.org for more information.