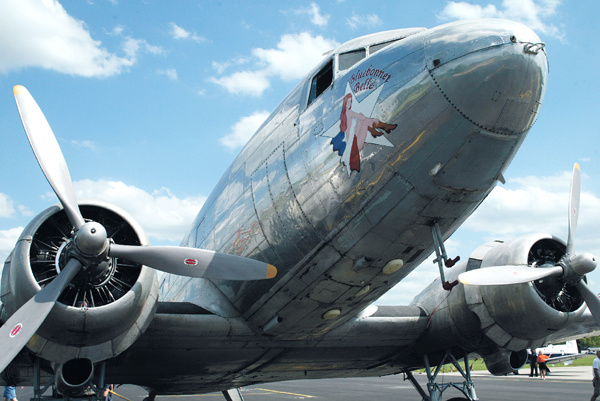 A dance raising money for engine repairs to the Bluebonnet Belle is 7:30-10:30 p.m. May 7 at the Kingsland Community Center. Courtesy photo

KINGSLAND — The Bluebonnet Belle, a C-47 flown and maintained by the Highland Lakes Squadron of the Commemorative Air Force, came to life in the 1940s about the time Glenn Miller was hitting his stride with a big band sound.

Now, in some ways, Miller is coming to the venerable aircraft’s rescue. Or, at least, the sound he and other big band leaders crafted during the 1930s and ’40s. On May 7, the Flashbacks, a Highland Lakes big band group, is hosting a dance and performance from 7:30-10:30 p.m. at the Kingsland Community Center, 3451 Rose Hill Drive. There is no admission charge, but Flashbacks and Highland Lakes squadron member Dave Hargett said any donations dropped in the tip jar go to the Bluebonnet Belle's engine fund.

"Hopefully, we can get it back this summer," Hargett said regarding the Belle.

The airplane is in Wisconsin, where it's been since July of last year after its engine failed during an air show. Squadron members have their eyes on June 11 as a possible return date, but replacing the engine of a World War II-era plane isn't easy or cheap.

"We took the Belle to an air show in Osh Kosh, which is one of the biggest around," Hargett said. The Belle participated in a re-enactment program as a paratrooper plane. "But during one of the drops, the pilots noticed something was wrong with one of the engines.”

Mechanics confirmed one of the worse things possible: a blown engine.

And being such an old plane, you can't exactly find new engines for it lining store shelves. In fact, Hargett said the squadron was looking at a $70,000 bill for replacing it with an overhauled motor.

"We just didn't have the funds for that," he said.

Fortunately, an Osh Kosh-based company called Basler specializes in transforming DC-3s (a C-47 equivalent) into other uses such as military and scientific research. Basler officials told the squadron leadership they had a used engine for the Belle.

"They were willing to sell it for about half of what an overhauled engine would cost," Hargett said.

So, since late July 2015, the Bluebonnet Belle has stayed in Wisconsin for repairs while the Highland Lakes Squadron worked to raise money.

"We're almost there, but not quite yet," Hargett said.

The Flashbacks performance and dance May 7 is one more step to getting the Belle back. The Flashbacks are donating their time for the event. They typically hold a monthly concert at the community center, but when Hargett asked the other members if they'd be willing to do another show in May for the Belle, they agreed. The Flashbacks consist of members from the Highland Lakes area, but Hargett said several are from Austin and at least one from Waco.

"It also gives the band a little more exposure as well," Hargett added.

The squadron has tentatively scheduled a welcome home event June 11 for the Bluebonnet Belle at the hangar in Burnet. Until then, though, people can support the aircraft and the squadron by attending the Flashbacks dance.

Go to highlandlakessquadron.com for more information on the Belle or how to support its return.