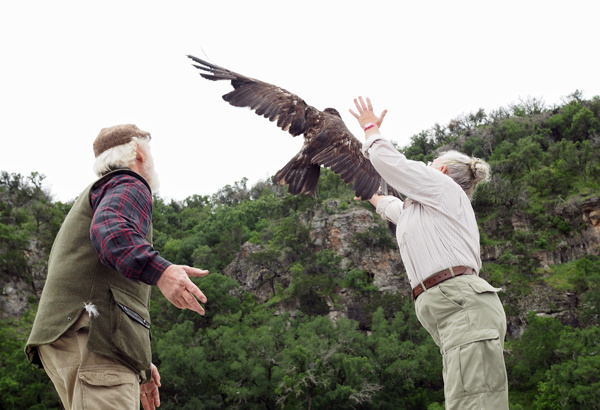 John Karger and Kelly Rayner of Last Chance Forever release a juvenile bald eagle April 13 up the Colorado River north of Lake Buchanan from the Vanishing Texas River Cruise. The eagle was rescued from northeast Texas after a storm that destroyed its nest. Go to lastchanceforever.org for more information. Staff photo by Daniel Clifton

BURNET — As the crowd of about 20 people gathered on the stern of the Vanishing Texas River Cruise reached "one" on their countdown, Kelly Rayner of Last Chance Forever tossed the juvenile bald eagle into the air.

For a moment, everyone held their breath as the eagle spread its wings. But then as the young bird flew into a clump of trees at the base of a cliff on the Colorado River, the applause rang out.

"That's great," said John Karger of Last Chance Forever, looking back to where the eagle had flown.

The April 13 event north of Lake Buchanan marked the 22nd bald eagle the organization has released in that area. Karger said there are several reasons for that — a main one being Shawn Devaney and the Vanishing Texas River Cruise.

"Shawn makes a huge effort to monitor and report on the birds we release," Karger said.

He recalled an osprey the Last Chance had released off the cruise boat. Devaney spotted the bird several times sitting on the same tree it flew to after the release. So Karger returned, and he and Devaney boated up to check the osprey. It seemed fine and had been eating.

"But that type of commitment makes this a great place to release the birds," Karger said.

This bald eagle came to Last Chance Forever from northeast Texas after U.S. Fish and Wildlife Service officials recovered it from a severely damaged nest.

At the organization's facility in San Antonio, Karger and Kelly Rayner along with a cadre of staff taught the young eagle what it needed to know to survive, including how to fish.

"They have to learn a lot," Karger said.

They introduced dead animals such as placing fish on the ground. Once the eagle got that down, they put the dead fish in the pool. After some coaxing, the eagle went after it. But Karger said when they introduced live fish into the pool, it was an entirely different ballgame.

"He didn't want anything to do with that," Karger said.

But with patience and perseverance, the Last Chance Forever folks got the eagle fishing.

As for releasing the eagle, there was never any doubt.

"The truth is, a day outside our cages is better than any day in them," Karger said.

After the release, Rayner agreed.

"Out here is where it belongs," she said with a smile.

As for Devaney, taking the eagles and other birds of prey, it's just a wonderful event to be part of.

Last Chance Forever is a nonprofit that has been rehabilitating and releasing birds of prey since 1978. It relies heavily on donations to care for the birds. Last year, the organization went through more than 25,000 pounds of food for the birds. And, Karger said, they care for about 300 birds a year.

"It takes a lot of food and more to take care of birds we don't own — they belong to the public," he said.

Any support, no matter how much, is appreciated.

Go to lastchanceforever.org for more information.

The Vanishing Texas River Cruise offers Freedom Flight cruises throughout the year where Last Chance Forever releases birds of prey from the boat. Go to vtrc.com for more information and dates.