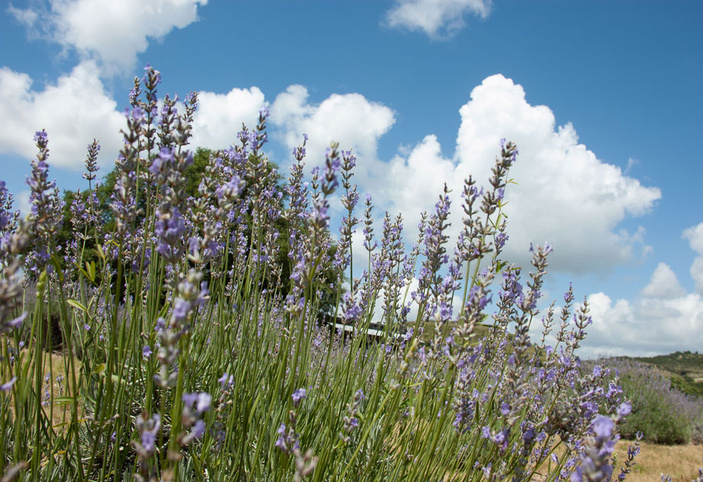 Lavender is a popular herb around the world and right here in the Texas Hill Country. Visitors can take in the scent and purchase lavender products at Blanco-area farms. Staff photo by Jared Fields

A fragrant herb used to anoint the feet of Jesus during biblical times and as a remedy for the Great Plague in 17th century London has become a cash crop and the reason for an annual festival in the Texas Hill Country town of Blanco.

The herb with ancient roots is celebrated every June at the Blanco Lavender Festival on the grounds of the Old Blanco County Courthouse.

Lavandula, as it is known by botanists, is a genus of more than 45 species and 450 varieties. With its sweet fragrance and therapeutic qualities, this herb has something for everyone.

The ancient Egyptians, Phoenicians, and Arabians used it for mummification; the Romans used it in cooking and bathing. In medieval France, it found its way into the laundry.

Queens Elizabeth and Victoria were enamored of the herb, which came to America with the Shakers, the first group known to grow it commercially in the New World.

Lavender is a fairly recent addition to Central Texas. The first commercial lavender field was planted here in 1999, the “Year of Lavender,” as it was coincidentally dubbed by the International Herb Association.

Today’s growing lavender market, which totaled $76 million in 2016, is fed by the demand for organic essential oils. Lavender is especially sought-after for properties that benefit the skin, making it a popular ingredient in a variety of skincare products. Lavender extract, oil, and essence are also used in food and beverage products, which alone are expected to create $7.65 million a year by 2024. The total market value for lavender-based products is expected to grow to $124.2 million by that date.

Although a seasonal plant, not all lavender blooms at the same time. Planters can harvest lavender year-round. In Central Texas, the main season runs from May through July, when the area’s alkaline soil and summer temperatures promote the best blossoms.

While in the Blanco area, whether for the Lavender Festival or shopping or eating, visit one of the local lavender farms that are open to the public.
Hill Country Lavender Farm
8241 FM 165, Blanco (new location)
Open to visitors during lavender season from 10 a.m.-4 p.m. on Thursdays, Fridays, and Saturdays (closed July 4)
M&J Lavender Farm
2484 Round Mountain-Sandy Road (County Road 307), Johnson City
Click the link to visit the website for more information.
Becker Vineyards and Lavender Fields
464 Becker Farms Road, Stonewall
The vineyard holds its own Lavender Festival in May.

This scented herb isn’t just for smelling. Many food and drink recipes call for it.

Place lavender into a bowl. Pour boiling water over it. Allow to steep for 10 minutes. Strain out the lavender and discard. Add sugar to the hot lavender water and pour into pitcher with ice.
Squeeze the juice of the lemons into the pitcher. Add cold water and stir. Adjust lemon and sugar to taste.

Puree peaches with sugar until smooth. Stir in lavender blossoms and let stand at room temperature for 2 hours. Stir in lemon juice and water then place in refrigerator until cold, about 2 hours.

Fill a canning jar about halfway with dried lavender flowers. Add twice as much oil as lavender.
Place the uncovered jar into a small saucepan with a few inches of water. Heat over a low burner for a few hours — keep an eye on it to make sure the water doesn’t evaporate out. Remove from heat. Strain the lavender flowers from oil.
A more traditional, but slower, option is to cap the jar of lavender and oil and let sit for 4-6 weeks, shaking occasionally. At the end of the allotted time, strain flowers from oil.