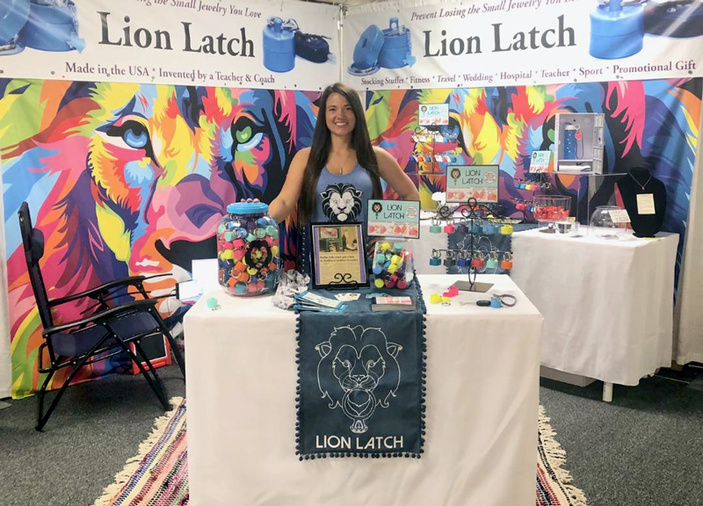 Lerin Lockwood stands in her booth for Lion Latch, her invention that keeps jewelry safely secure in plain sight, at AmericasMart in Atlanta. After a Kickstarter campaign to fund mass production, Lockwood’s creation has taken off, selling in stores across the country as well as online at lionlatch.com. Courtesy photo

MARBLE FALLS — Lion Latch is roaring along much to the delight of proud creator Lerin Lockwood. Her small invention with a big name keeps jewelry and small valuables secure in plain sight while a person works or plays.

What started in October 2015 as a Kickstarter campaign to raise money to make the plastic cylindrical container that clicks onto a key ring has turned into a mass production effort with the product being sold in stores across the country.

Lockwood might even receive more national exposure as she recently auditioned for "Shark Tank," an ABC reality show that gives "budding entrepreneurs the chance to bring their dreams to fruition." Contestants present their ideas and products to five "titans of industry who made their own dreams a reality and turned their ideas into lucrative empires,” according to show's webpage.

While Lockwood was told by "Shark Tank" producers not to talk about her audition, which happened July 21 in Denver, the Marble Falls High School art teacher and select volleyball coach did say Lion Latch has been well-received by store owners and customers in Texas as well as Alabama, Florida, Georgia, Illinois, Kentucky, New York, North Carolina, South Carolina, Tennessee, and Virginia.

“Everybody who (stays) near the water wanted a Lion Latch,” Lockwood said. “Fingers shrink in the water, and rings fly off. When they see it, it reminds them to take off their jewelry before they lose it.”

She generated even more interest during a weeklong stay in Atlanta for AmericasMart, which “connects retailers with top gift, home, rug, and apparel brands from around the world,” according to its website.

AmericasMart gave Lockwood a chance to pitch Lion Latch to buyers from retailers from across the country as well as some international outlets. Connecting with so many buyers on her own would have taken an inordinate amount of time, something she as a mother, wife, and teacher doesn’t have.

It also gave her a chance to stare the story behind Lion Latch. 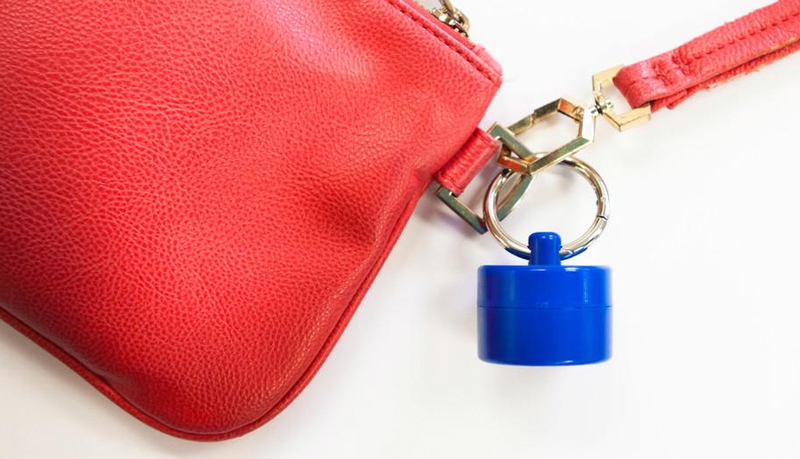 Lockwood came up with the idea for Lion Latch in 2013 when she was the Marble Falls High School assistant softball coach. She was coaching the defense and caught a ball, immediately feeling pain. She removed her glove only to see that her engagement ring was flattened and missing a diamond. She never found the stone.

Lockwood had just became engaged and had to make an even more painful phone call to her fiancé, Trent, who is now her husband.

Since the ring was insured, it was replaced, but Lockwood knew she had to find a way to keep her jewelry safe while participating in activities. When she shopped for products, she found they either had zippers or screws, which wasn’t safe enough for her. Lion Latch, however, was built with a lid and a key ring. It can only be opened by removing the key ring and pulling off the top. After putting jewelry and other small valuables inside, the lid slides back on and the reattached key ring secures the items. The key ring can be secured to purses, bags, belt loops, etc.

When her colleagues and athletes saw her invention, they all wanted one. Seeing a potential market, she began a Kickstarter campaign in 2015 to raise money to mass produce it.

And the sales keep ringing up.

Online fashion site Refinery29.com interviewed Lockwood for a story that focused on an unlikely Kickstarter project. The result of that story was another 100 sales.

An online post by Engagement 101 about how to keep jewelry safe while traveling kindled more interest, Lockwood said.

She also saw an opportunity to help promote other businesses by screen printing their logos onto Lion Latch lids. One company, Jewelers Mutual Insurance, ordered 250 with its logo.

Ironically, the company was the one that had insured Lockwood’s engagement ring.

And while Lion Latch works for everyone, it's especially great for student-athletes, Lockwood said, noting University Interscholastic League rules prohibit players from wearing jewelry during games.

Along the way, Lockwood turned to other business owners and inventors for help, including Janie Cooke and Caroline Nix, co-inventors of the O-Venture ring, which attaches to purse handles and slides onto wrists, making a purse more secure.

Francie Dix, president of the Horseshoe Bay Business Alliance, also was a huge help as the first promotional customer of the product.

In the Highland Lakes, Lion Latch can be purchased at Numinous Coffee Roasters, 715 RR 1431 West, and The SPA on Par 3, 112 Par Three Court in Horseshoe Bay. You can also buy them online at lionlatch.com. The product comes in many colors.

As she’s been promoting and talking to people about Lion Latch, she's heard similar stories to hers about losing a valuable piece of jewelry.

“It was the worst feelings — panic and sadness — until you find the jewelry,” she said. “It’s something that really matters to you. It’s sentimental. I don’t want anyone to feel the way I did.”

For a video on how Lion Latch works, go to lionlatch.com.