Lights Spectacular in Johnson City is literally out of this world 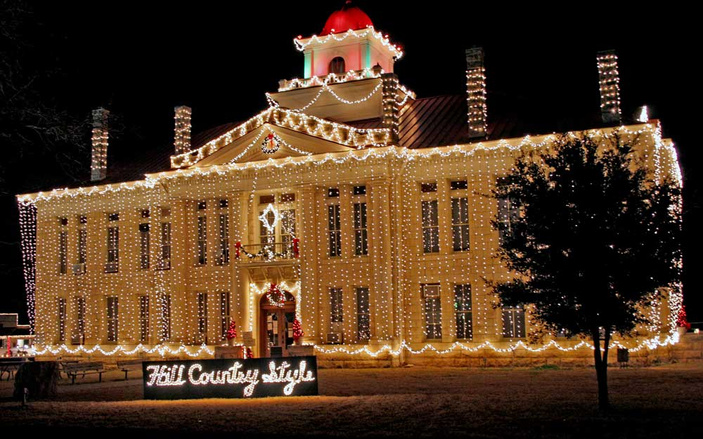 The Blanco County Courthouse in Johnson City will be outlined with Christmas lights once again as part of Lights Spectacular. Photo courtesy of the Johnson City Chamber of Commerce and Pedernales Electric Cooperative

Lights Spectacular in Johnson City is literally out of this world

JOHNSON CITY — Johnson City’s Lights Spectacular is so bright that the state of Texas can’t contain it.

The Pedernales Electric Cooperative, headquartered in Johnson City, strings up a million LED lights during the annual Christmas display. That combined with the rural location of the town and the lack of surrounding light pollution allows the display to be seen from really, really far away.

“Once they flip the switch, it’s so bright, it can be seen from the International Space Station,” said Frances Ann Giron, the Johnson City Visitor Center and Chamber of Commerce executive director.

Those lights will shine big and bright starting at 6:30 p.m. Friday, Nov. 25, when town and PEC officials turn on the holiday display to officially welcome the season. They lights stay on through Jan. 2, 2017.

But the display is simply the highlight of the season, which has numerous activities lined up to bring good cheer.

Market Days, showcasing the work of several artists and vendors, is 2-6 p.m. that Friday and continues 10 a.m.-10 p.m. Saturday and noon-4 p.m. Sunday at the intersection of Nugent and Cypress streets.

A street dance featuring Pearl Snaps is 8 p.m. Friday by the Blanco County Courthouse in the middle of the town square facing Pecan Street.

Johnson City Park, located on the corner of Avenue G and U.S. 290, is renamed Whimsy Park during the holidays.

“It’s decorated with every cartoon figure you can imagine,” Giron said. “That’s also when Santa arrives. The city is starting to decorate Whimsy Park; they’re just about done. Everybody is getting cranked up.”

Art Fest is 4-8 p.m. Saturday on Nugent Street and is hosted by the city’s art galleries with hors d’oeuvres and refreshments.

And at 6:30 p.m. that day is the Lighted Hooves and Wheels Parade in downtown. Since it’s an evening event, everyone participating will decorate their tractors, trailers, floats, and animals with lights and other things that glow in the dark.

The fun continues the next couple of weeks. During the evenings of Dec. 2-4 and Dec. 9-11, there will be carriage and hay rides starting at the park gazebo. Cost is by donation.

Giron said one couple would be proud to know their town can be seen from outer space: President Lyndon B. Johnson and Ladybird Johnson. She noted “Christmas was a big deal” to the Johnsons, so the city continues to honor them with the holiday festivities.

“I’ve already had emails from people in Missouri and Louisiana, people wanting to come, and five bus tours from San Antonio saying they want to come to Johnson City, Marble Falls, and Fredericksburg to see the lights in the Hill Country,” she said. “It’s not just for kids. When I was a kid, it was such a wonderful tradition. So bring your kids and your grandkids – they can see it, too.”

To see the Lights Spectacular from space, go to nasa.gov and search for “Christmas lights” or click HERE.