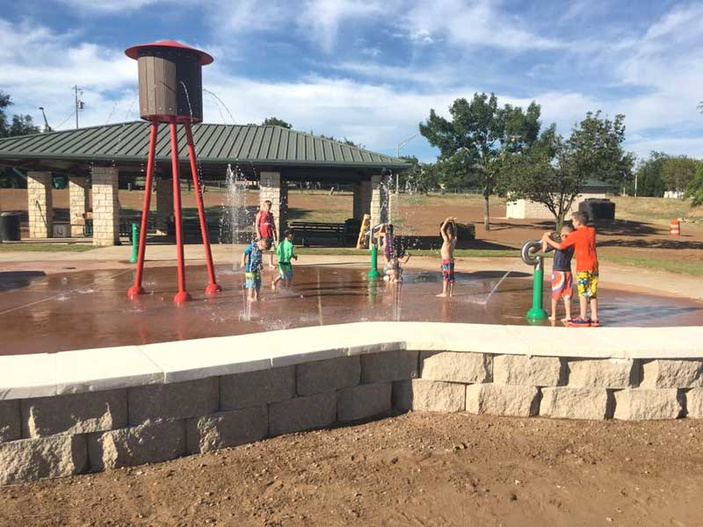 Some Llano kids recently gave the Matt and Doraliza Raglin Splash Pad a ‘dry run’ as their parents worked on laying sod around the new feature at Badu Park in Llano. The splash pad is part of the Llano Parks Project’s effort to improve city parks. The parks project board and city officials are holding a ribbon cutting for the splash pad at 10 a.m. Saturday, July 1, though it may be open as early as Wednesday, June 28. Photo courtesy of the Llano Parks Project

LLANO — Just four years into the Llano Parks Project’s existence, the group of Llano residents is celebrating a major milestone, and everyone is invited.

“It doesn’t feel real,” said Julie Leverett, the president of the nonprofit that works to improve the city’s parks.

The group is cutting the ribbon for the Matt and Doraliza Raglin Splash Pad at 10 a.m. Saturday, July 1, at Badu Park, 300 Legion Drive.

It’s the first water feature of its type for the Llano parks system. The Llano Parks Project raised $230,000 for the splash pad. It’s working to raise another $60,000 to add more vertical features to the pad such as water bucket drops.

Leverett and other members are taking some time out from project work to savor the opening of the splash pad. Though the ribbon cutting is July 1, Leverett estimated it will be open to the public Wednesday, June 28.

The Llano Parks Project formed about four years ago after several parents, including Leverett, became tired of hauling their kids to other cities and communities for recreational activities. Though Llano boasted several parks, including three along the river, the parents felt the equipment and amenities were lacking.

Instead of complaining about the situation, the parents formed the Llano Parks Project and began working alongside the city of Llano to improve the parks.

The organization and city upgraded playscapes at City Hall Park as well as consolidated the Badu Park playscapes into one area, which helped parents keep an eye on their children. Before the consolidation, Badu Park’s two playscapes (each geared toward different ages) were at separate parts of the park.

A beach was added along Badu’s waterfront as well.

The splash pad’s name comes from major donors to the project. Leverett said the parks project was selling chances on a used Polaris RZR off-road vehicle. Matt Raglin spotted the RZR displayed at a Llano business. He inquired about the Llano Parks Project and decided “that was something I could get behind,” Leverett said. And he and his wife did, giving a big boost to the splash pad.

The pad provides a great way for kids of all ages to cool off. There’s no fee to play in it. And since it’s a zero-depth wading structure, Leverett said a lifeguard isn’t required.

The Llano Parks Project has a list of other things members would like to tackle, including phase 2 of the splash pad. Volunteers and donations are always appreciated.

Go to llanoparksproject.org for more information.