Get to know some famous Winter Texans at 'Llano's Bald Eagles' 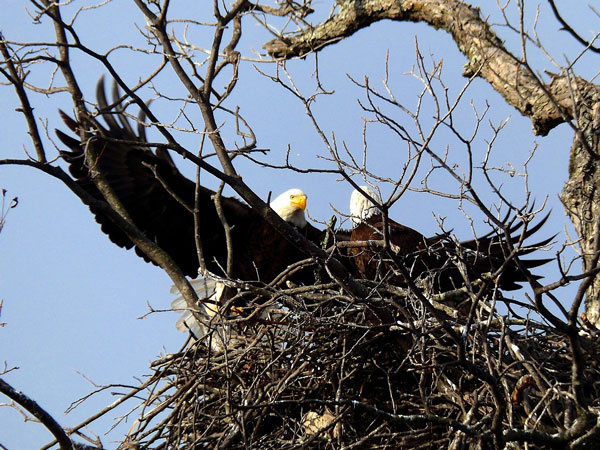 A nesting pair of American bald eagles raises their young every winter in the Llano area. Photo courtesy of Jim Baines

Get to know some famous Winter Texans at 'Llano's Bald Eagles'

LLANO — While the Texas 29 bald eagles now nest across the Llano River and out of sight from bird watchers on the highway, Texas Parks and Wildlife Department biologist Dale Schmidt said they’re still visible if you’re patient.

“They’re still near the river, and if you sit there long enough, you’ll see them,” he said. “They’ll sit in one of the trees. Driving by, I’ll see them around there.”

For those looking for more insight into the American bald eagle, Schmidt is giving a presentation on the species at noon Jan. 21, 2016, at the Llano County Library, 102 E. Haynie St. Reservations may be made by calling (325) 247-5248.

“This is a presentation I’ve given to schools and other groups,” Schmidt said.

He’s been observing the pair of eagles along Texas 29 even before the couple built a nest in sight of the roadway (about 8 miles east of Llano) in 2004. They typically return each fall to settle in for the winter months, raising their eaglets here until they head north for the summer.

“Most of the bald eagles in Texas are found east of I-35,” Schmidt said. He said the underlying reason simply is habitat. Bald eagles prefer nesting in trees near rivers or lakes where they can hunt.

Along with the nesting pair, the Highland Lakes boasts a winter population of bald eagles that spend the colder months along the shores of upper Lake Buchanan and the Colorado River as it feeds into the lake. These birds usually arrive as their hunting waters in northern parts of the country and Canada freeze over.

Unlike the pair found along Texas 29, the Lake Buchanan birds don’t nest and raise their young.

Schmidt will talk about both sets of birds during his presentation.

With the Texas 29 birds so visible for several years before building their nest out of sight from the highway, Schmidt said it really increased the local interest in bald eagles.

“I get stopped all the time by people wanting to know more about eagles and the ones found in the area in particular,” he said.

He pointed out that the federal government has removed the American bald eagle from the Endangered Species list, but it is still a protected species due to the Bald and Golden Eagle Protection Act, the Migratory Bird Treaty Act and the Lacey Act.

During his presentation, “Llano’s Bald Eagles,” he will go over the various protections afforded the bald eagle as well as its biology, ecology and habitat needs.

“We’re fortunate to have these birds here,” Schmidt said. “I just want to share a little bit about the birds with folks.”

A few years ago my husband and I saw a Bald Eagle fly over our back yard. For 3 or 4 days we saw it then never saw it again. Do they best any where around Fredericksburg Texas? I know we have the Pedernales river and we have a nice gold fish pond with a water fall in our backyard. Some of our large gold fish disappeared. Is it normal for Bald Eagles to come here? It was a wonderful surprise. Thanks Debbie