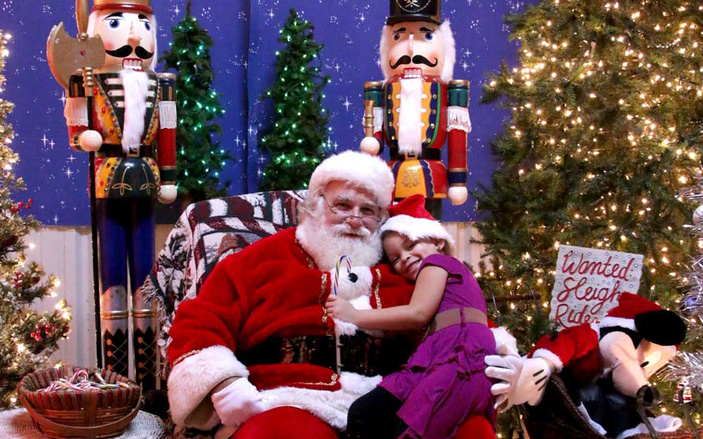 Santa Claus will be at the Lighted Christmas Parade in Llano on Dec. 3. Afterward, he'll be listening to children's wish lists at the Starry Starry Nights lights display at Badu Park. Courtesy photo

LLANO — The holidays in Llano kick up another notch with three events Saturday, Dec. 3, beginning with the one that has the most kicks.

That would be the Reindeer 5K Fun Run, which starts at 9 a.m. at the Train Depot, 100 Train Station Drive. The entrance fee is a $10 donation, which goes to the city’s Meals on Wheels program. Register at 8:45 a.m. on race day at the Llano Chamber of Commerce, which is located at the starting line.

“Everybody gets a pair of antlers,” said chamber Executive Director Briley Mitchell. “They throw the antlers at me as they’re leaving. This is just something we thought would be fun to do during the holidays.”

Mitchell said he bought 150 antlers about three years and believes he still has close to that number this year.

Also Dec. 3, the Woman’s Culture Club Home Tour begins at noon from the group’s clubhouse, 210 W. Sandstone, where attendees pay $14 each or $25 for a couple for the tour, which includes a map and refreshments. To purchase tickets in advance, visit the chamber.

And while there, buy a ticket for the Christmas basket prize giveaway for $2 each or $5 for three. Club members donate their favorite items to the basket to fill it, said Patsye Parker, the chairman of the home tour.

The tour includes four homes and some businesses. Two are located in buildings that are at least 100 years old: The Grid Iron Gallery, 112 E. Main St., owned by Jack Moss, and the home owned by Ken Cline, which opened in 1905 as a Texaco that served as a through station between Llano and San Antonio.

Proceeds from the tour benefit the culture club’s scholarship fund. Scholarships will be awarded to two Llano High School seniors at the end of the school year.

“It’s a good day,” Parker said. “It’s a good way to get holiday spirit and encourages the homeowners participating to decorate their homes.”

At 3 p.m. is the Sip ’N Stroll in downtown Llano. Merchants will offer snacks and wine as participants stroll in and out of stores. Arts in the Stores, during which local artists have their work displayed throughout the area for people to purchase, goes on at the same time.

“Nearly every business on the square is open until 6 p.m. and, hopefully, longer,” Mitchell said. “It’s a full commitment from the members on the square. It’s really good.”

At 4:30 p.m. is when the entertainment begins, opening with McKenzie Jones and following with JeriAlice Arsenault at 5 p.m. and Andrew and Erica Williams at 5:30 p.m.

Giveaways will begin at 6 p.m. in various locations on the square, Mitchell said.

The evening ends with the Lighted Christmas Parade at 6:30 p.m. complete with floats, bicycles, cars, and “whatever people want to bring,” Mitchell said.

“Santa Claus will be on a fire truck, and we’ll take him straight to Starry, Starry Nights,” he added.

The Starry, Starry Nights lights display is on the banks of the Llano River and is Mitchell’s favorite event this time of the year.

“This brings people together,” he said. “People are in such a festive mood.”