‘As Long As We Both Shall Live’ marries comedy, mystery, and murder 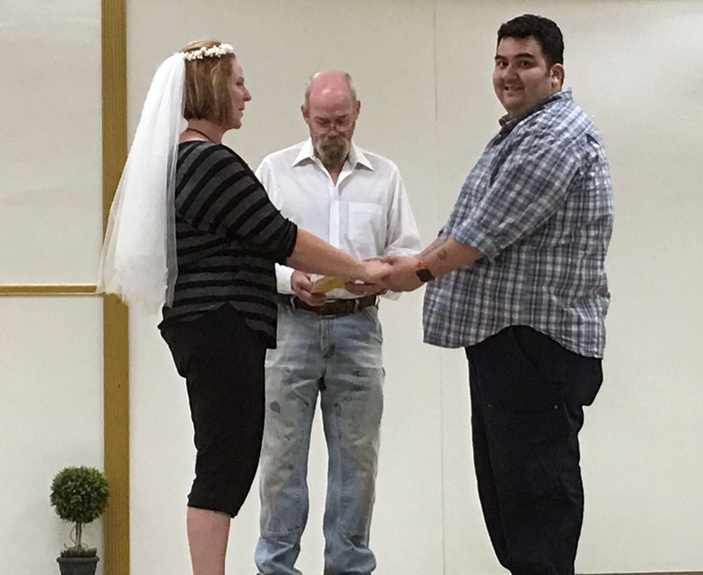 The Llano Community Theatre production of ‘As Long As We Both Shall Live’ opens March 30 at the Llano Elementary School Community Room. Dean Zachary (middle) plays the reverend who is marrying Tina Stewart, playing Addison, and J Oscar Polanco, who plays Jamie. The remaining cast, not pictured, are Connie Turner, George Fricke, and Clayton Hull. Photo courtesy of Lisa Rogers

‘As Long As We Both Shall Live’ marries comedy, mystery, and murder

Director Lisa Rogers is sure you’ll enjoy the Llano Community Theatre’s upcoming comedic murder mystery as much as she has.

“I don’t think I’ve ever laughed as much in a rehearsal as I have with these guys,” Rogers said of her experience so far. “They’ve put their own unique touches on each role.”

“As Long As We Both Shall Live” runs March 30-31 and April 5-7 in the Llano Elementary School Community Room, 1600 Oatman St. in Llano. Performances are 7 p.m. Fridays and Saturdays and 2 p.m. Sundays.

Tickets are $10 at the door or in advance at the Llano Chamber of Commerce.

The cast of six has two new faces joining regular Llano Community Theatre performers. For Rogers, the production is her first as director after acting in several the past 18 months.

“It’s going great; I’ve got a really good assistant director, Kari Miller,” Rogers said. “It’s been really fun getting to work with the new people and to work in a different capacity than the people I’ve been on stage with before.”

The family-friendly production follows the story of Addison Ashe, who is marrying the wealthy and charming Jamie Wilcox. When the wedding planner is poisoned at the rehearsal dinner, the future mother-in-law points to Addison as the killer.

“(Audiences) are sure to have a good time; it’s a funny, funny play,” Rogers said. “And it has its thought-provoking moments as well.”