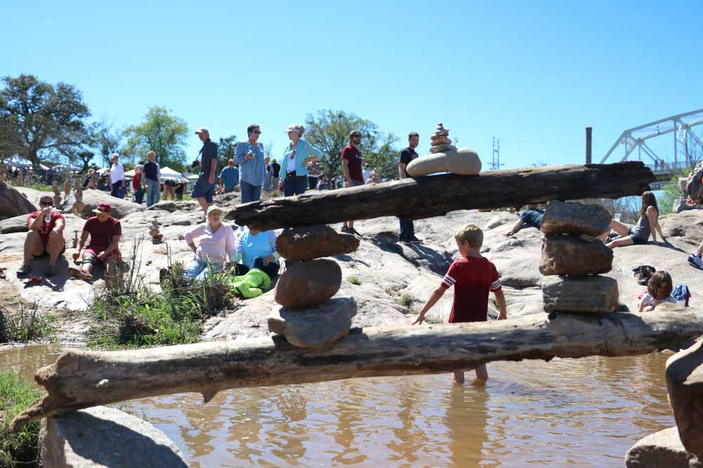 The Llano Earth Art Festival takes place at Grenwelge Park on the banks of the Llano River. File photo

Rich Houston gets it. He understands the Llano Earth Art Fest isn’t quite what people expect to see in a Hill Country town.

“I still have to kind of explain what it is to some of the people who live here,” he said.

When describing LEAF, Houston — who helped organize the inaugural event then the next two — paused. He started to say something then paused again.

You see, LEAF is hard to describe.

“I would say it’s like nothing else in Texas, certainly nothing like you’d find in the Hill Country,” Houston finally said.

That doesn’t paint much of a picture, but, honestly, you just have to experience the annual earth art celebration yourself to “get” it. Even then, you might walk away thinking, “What did I just see?”

So what exactly is LEAF?

“It’s a festival that has all these earth art types of things,” Houston said.

Which brings up another question: What is earth art?

While he wasn’t sure what it was when Binky Morgan proposed the idea during a meeting several years ago at the Fuel Coffee House in Llano, Houston has a better idea now.

“Every year, new artists have come in, and many return,” he said. “It’s amazing what they can do with some rocks, dirt, water — whatever they find around the area.”

If you had to pick something to serve as LEAF’s cornerstone, it would probably be the rock stacking. Artists stack and balance rocks in gravity-defying arches and sculptures. 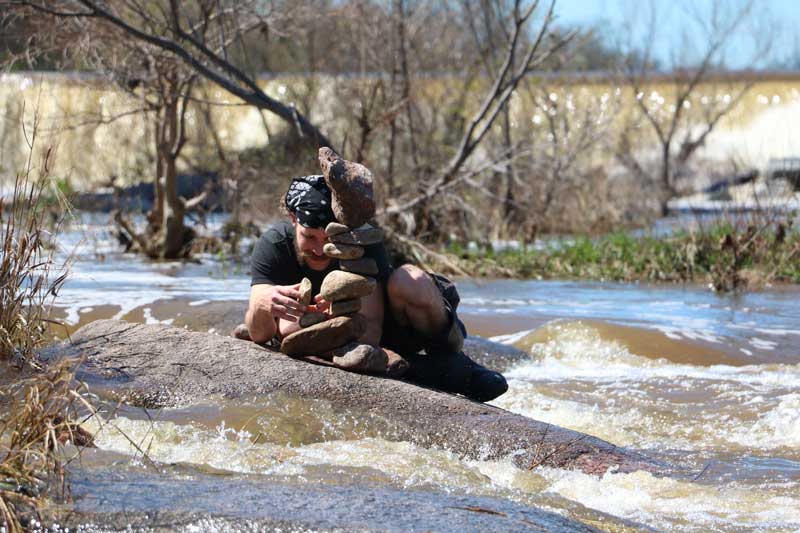 When Marcus Hammons moved to Llano in 2013 from the Texas Gulf Coast, there wasn’t anyone making rock sculptures, something he picked up in 2005 or 2006 from a couple of Norwegian visitors. He spied them “stacking rocks” on one of the jetties and became enamored with the art form.

Soon, he was creating his own rock sculptures around the jetties. When he and his wife, Valeria Smasal, moved to Llano in 2013, he discovered the mother lode of rocks.

“Nobody was doing it here when I moved here,” Hammons said.

He would create sculptures around town, even including it in his landscaping designs. The sculptures caught the attention of Morgan, who then tossed the idea of holding a rock-stacking festival, which eventually became an art festival.

Almost right out of the gate, LEAF became known as the home of the national rock stacking championship. It added the world championship last year.

Hammons, who doesn’t compete in the championship but does sculpt during LEAF, pointed out a couple of things that really gave LEAF a boost the first year: the great weather and quick buy-in by earth artists such as Michael Grab of Boulder, Colorado, who jumped on board and spread the word.

“We kind of had no idea,” Houston said about the LEAF committee’s expectation for attendance the first year. “I remember showing up the first day and was blown away by how many people were there.”

LEAF draws many people from the Highland Lakes, but others from outside the area have discovered this off-kilter, not-your-typical-Hill-Country festival.

The event brings in national and international artists. Hammons said they expect artists from the United Kingdom, Canada, Italy, France, and even Slovenia.

One of the great things about LEAF is it’s a participatory event. If you’re sitting along the Llano River at Grenwelge Park, you might feel the urge to give rock stacking a try. Unless you’re entered in one of the contests, there’s no fee for getting your hands dirty.

The festival features different earth art forms as varied as the artists themselves. Plus, there’s a lineup of musicians and the Free Flow on the Llano Vintage VW Car Show.

But one of the most interesting events is the Leafling Festie Fashion Circus Parade showcasing the most “outrageous” attire worn by festival-goers.

The parade is another part of LEAF that’s best experienced — a description doesn’t do it justice.

Well, let’s face it, the only way to really understand LEAF is to check it out.

“That’s what I tell people,” Houston said. “I still have people in Llano who ask me what it is, and you just have to see it to really understand it.”

Go to llanoearthartfest.org for a schedule of events, workshop information, and tickets.