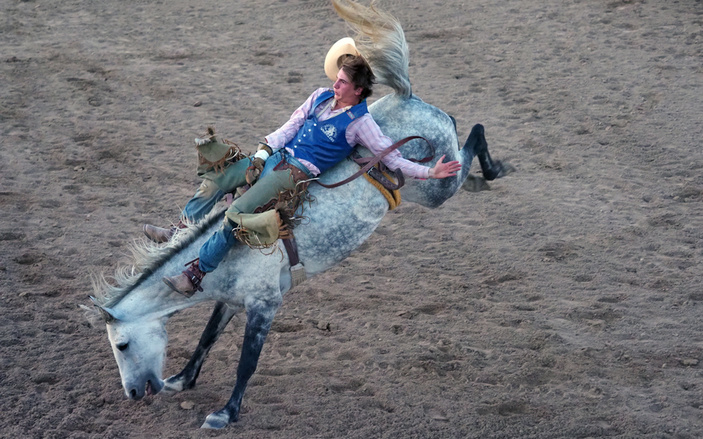 “I block everything out,” said the 18-year-old rodeo athlete. “I don’t care how loud it is. I’m just concentrating on the ride.”Once he gives the gate man the nod to throw open the gate, it’s just Campbell and the horse.

Campbell and countless other rodeo athletes look forward to each ride and every competition. The next one for Campbell is the Llano Open Pro Rodeo, which is Friday-Saturday, June 1-2, at John L. Kuykendall Event Center, 2200 RR 152 West. Performances start at 8 p.m. with the first round of mutton bustin’ taking off at about 7:30 p.m.

The rodeo features all the traditional events from bull riding to breakaway roping as well as mutton bustin’ and a calf scramble for the kids.

Tickets are $10 for adults and $5 for ages 12 and younger. You can purchase them at the door or at the Llano Chamber of Commerce, 100 Train Station Drive, during regular business hours.

Getting on the back of an animal bent on throwing you off seems like a strange thing to do, especially since you’ll eventually have to bail, even if the horse doesn’t buck you off. But for Campbell, there’s nothing he’d rather do.

“That’s what makes them so fun to watch,” Mitchell said, “but can also make them scary when you're in there taking photos.” 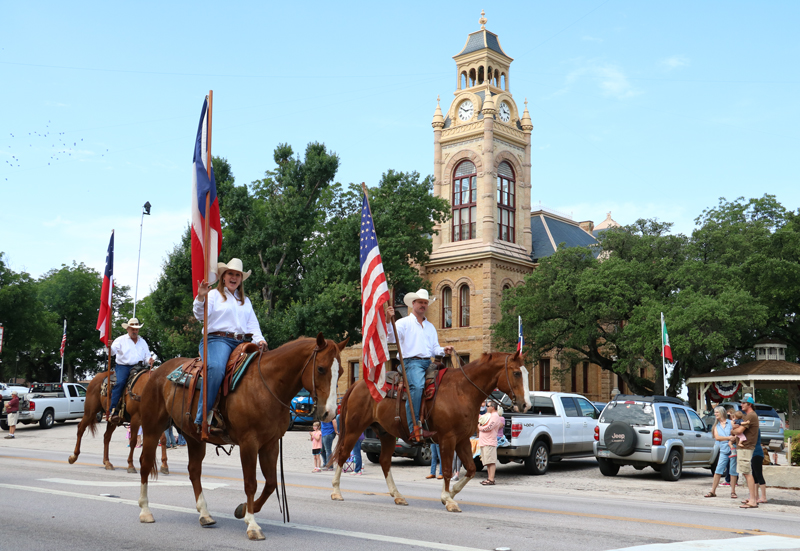 The Llano Rodeo Parade starts at 10 a.m. Saturday and makes its way around the Llano County Courthouse. After the parade, the Boy Scouts are holding their annual barbecue on the courthouse grounds. Staff photo by Jared Fields

Dalton’s dad, Gary Campbell, admitted he is reluctant to let his son go but knows that, if Dalton is to be successful, he must learn from the best. Gary attends about 80 percent of Dalton’s rodeos, and helps him prepare for each ride.

“It’s a dangerous sport, and no father wants to see his kid get hurt,” Gary said. “But you can’t shelter 'em.”

With his own rodeo background and fatherly wisdom, Gary can step in when necessary. During a March rodeo, Dalton got hung up on the horse and couldn’t make a clean dismount. He banged up his ankle; it didn’t break, but it twisted quite a bit. Dalton probably would have made the next rodeo, but Gary knew if Dalton wanted to make a career out of rodeo, he needed to let the ankle properly heal.

Though Dalton’s competed in high school and youth rodeos since his freshman year, this year marks the first time he’s really hit the Cowboy Professional Rodeo Association circuit. In CPRA-sanctioned rodeos, such as the one in Llano, he competes against older and more experienced cowboys as well as on a higher level of horses.

“If I’m going to get better, I have to compete against the best,” Dalton said.

He competed in the Burnet County Rodeo on May 11 in front of a hometown crowd, including his entire family. It was a big night for him: He earned a 74, just outside the money.

After each rodeo, Dalton and Gary review a video of his ride because while he’s on the horse, Dalton really can’t assess what’s working and what’s not. It’s an eight-second ride, and there’s not much time to reflect while you’re on the back of a horse bent on bucking you off.

“The videos are very helpful,” Dalton said. “Even if I make a good ride, the video shows me what I need to work on. If I didn’t have the video to look at, I might not know what I’m doing wrong and keep going out there and doing it. That could cost me points.”

Dalton has his eyes on the big leagues of rodeo: the Professional Rodeo Cowboy Association. His dream isn't just to earn a spot in the major circuit; he wants to reach world championship status.

There’s no way to guarantee such aspirations, but Gary believes his son has a few things going for him: He wants to learn and improve and he’s goal-oriented.

“I’m from the belief you don’t set your kid’s goals, you let them, and help them achieve them,” Gary said. “He’s set his, and now each step takes him that way.”

In professional rodeo, there’s no draft. You can work your way from associations such as the CPRA to the more prestigious PRCA without attending college. Why go to Odessa College and not hit the road for a year or two to try for a PRCA card? Well, Gary pointed out, one reason is Dalton needs to get an education (he plans to study welding), but it’s also about the resources Odessa College offers, including the coach and the rodeo facility.

“They have their own (rough stock) horses,” he said. “He’s going to have the practice facilities, whether it's the bucking machine, the spur board, or horses. And, he’s going to have one of the best coaches around.”

With high school graduation behind him, Dalton plans to focus on rodeos throughout the summer, mainly CPRA events, though he has the state high school and TYRA championships on his calendar with a shot at high school nationals. It requires plenty of windshield time and multi-rodeo weekends.

After a week off because of high school graduation, Dalton returns to the arena in Llano either Friday or Saturday night. On the night he isn’t in Llano, he’ll make a run to the Yoakum rodeo.

Along with the Llano Open Pro Rodeo performances on Friday and Saturday at the arena, the slack events are 6 p.m. Thursday, and the Llano County Team Roping is 6 p.m. Wednesday. Admission is free for both events.

“If people are on the fence about coming to the rodeo,” Mitchell said, “I’d probably ask them what their concern is, but point out it’s a fast-action, two-hour rodeo that never slows down.”

The Llano Rodeo Parade starts at 10 a.m. Saturday and makes its way around the Llano County Courthouse. After the parade, the Boy Scouts are holding their annual barbecue on the courthouse grounds.

Roger Creager headlines the Llano Open Pro Rodeo dance at 8 p.m. June 2 at the Ramblin' Rose, 809 W. Young St. Doors open at 7 p.m. General admission is $25, but you can get $5 off with a rodeo wristband. VIP tables for eight are $300. Reserve tables and advance tickets at Inman's Kitchen, 809 W. Young St.; Llano Auger Rentals, 304 E. Young St.; and doubleeagletx.com.