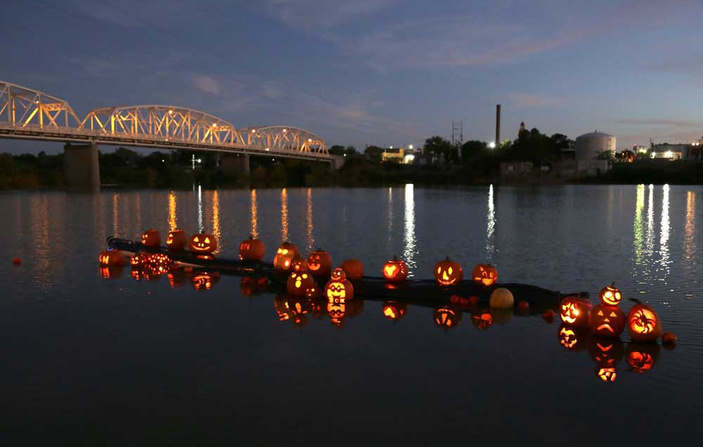 LLANO — Grab a pumpkin and some carving tools and get to work creating something for the second annual Llano River Pumpkin Float.

“We’re expecting it to be bigger this year,” said organizer Cheryl Quallenburg, “but we’re still learning.”

She described the event, which is 4-9 p.m. Saturday, Oct. 28 at Badu Park, 300 Legion Drive in Llano, as an “interactive art installation.”

Don’t let this keep you from carving a pumpkin or letting your kids in on the fun because Quallenburg said the primary reason behind this event is family.

“We used to have a pumpkin-carving contest, but some people didn’t enter because they didn’t think they would make these incredible pumpkins,” she said.

But pumpkin carving is a great family activity from picking the perfect pumpkin to deciding on a design to creating it. It’s one of those activities kids and parents (or grandparents) can do together, Quallenburg noted.

“This isn’t about who can be the best. It’s about more pumpkins out there on the water and having fun,” Quallenburg added. “It’s about community, about art, and about family.”

All you have to do to participate is bring a carved pumpkin (no glitter or other substances that would pollute the river) to the park starting at 4 p.m. The crew of volunteers (they could always use a few more hands) will then arrange the pumpkins and get them ready for the float. Yes, they will actually float the pumpkins on the Llano River, with a few tricks and techniques to make it work.

As people wait for the actual float, they can enjoy vendors, live music, and other activities. The Wildflower Dance Studio dancers from Llano will be performing as well.

This year, renowned sand sculptor Joaquin Cortez will be on hand creating a piece of art.

Cortez participated in the 2017 Llano Earth Art Fest in March, where he created sand sculptures.

“And, of course, the pumpkin float is going to be spectacular,” she added.

People can try to get their pumpkins back after the float, but Quallenburg said since it’s on the Llano River, they don’t know exactly where the floating gourds will end up.

Along with bringing your pumpkin, your family, and yourself, bring a camera because it’s going to definitely be a photo-worthy interactive art installation.

Call Quallenburg at (512) 417-9274 for more information or to volunteer. Also, in case of inclement weather, officials will cancel the event. Check the Llano River Pumpkin Float Facebook page for updates as well as more information.