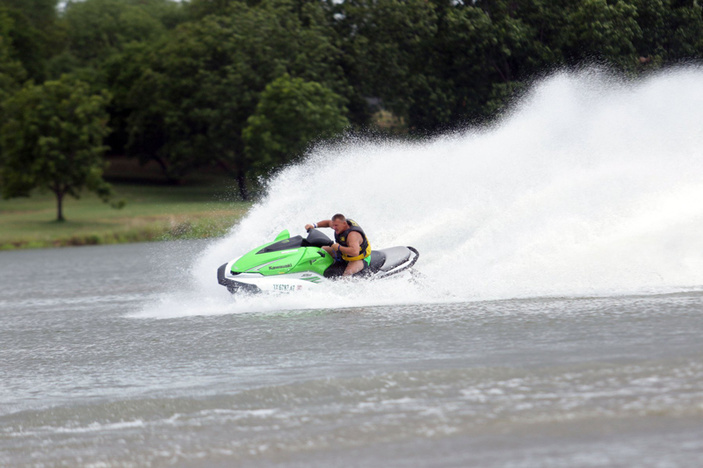 The Jet Ski races are a highlight of the Llano Rock’N Riverfest. The rest of the fun at Badu Park includes parades, children’s games, a car show, a barbecue cook-off, live music, and vendors. A fireworks show over the Llano River is July 4 and again July 6. Courtesy photo

Llano’s Independence Day celebration starts with a bang and ends with a splash.

It’s time for the Rock’N Riverfest.

A 45-minute fireworks show lights the fuse of this festive holiday event at about “dark-thirty” July 4 over the Llano River.

“The fireworks are so good that you should be able to see them throughout the city,” said Briley Mitchell, the executive director of the Llano Chamber of Commerce, which is organizing the event.

For the best views, though, head to Badu Park at 300 Legion Drive, Grenwelge Park at 199 E. Haynie St., or the Llano Visitor Center at 100 Train Station Drive.

The fun continues July 6-7 at Badu Park with the popular Jet Ski races both days. On Saturday are the kids’ and pet parades, a classic car show, vendors, children’s activities, live music, and another fireworks show. Admission is free.

A barbecue cook-off is also July 6 with check-in the evening of July 5.

“The way it’s looking, it’s bigger than what we’ve seen so far,” Mitchell said about the event, which started four years ago. “It’s evolved into a two-day event, which is better. We’ve added multiple events to the weekend.”

For a less rocking but more peaceful start to Saturday, Mitchell is leading a kayak trip from the Badu Park boat ramp at 6 AM to watch the sunrise over the river. Kayakers should return by 8 AM.

“This gives people a reason to get up early,” he said.

Two hours later, Llano resident McKenzie Jones will sing the National Anthem to kick off the festival at Badu Park.

Children’s activities include a giant inflatable pool, a big swinging arm game, and hamster ball races. Kids can have fun with a $10 wristband. The Texas Parks and Wildlife Department will set up a fishing tank.

A pet parade begins at 10 AM in front of the stage. Owners can sign up their animals for free. Prizes will be awarded to the top three most patriotic pets.

The Oldies But Goodies Car Show also starts at 10 AM south of the American Legion Hall at the park.

The Jet Ski races begin at 10:30 AM Saturday and Sunday with qualifying heats in the professional and amateur divisions on both days. Riders will compete in either a Jet Ski course race or a barrel race trying to clock the fastest time. Because of the number of entries, organizers decided to hold two days of racing.

“We’ve had so much interest in it we’ve had to add a second day,” Mitchell said.

The International Barbecue Cookers Association is hosting the barbecue cook-off, though master grillers don’t have to be members of the association to compete. The cost for chicken, ribs, and brisket is $150, no matter if competitors are cooking one, two, or all three meats. The cost to compete in the beans category is $20.

Judging for beans is 11 AM followed by chicken at noon, ribs at 1:30 PM, and brisket at 3 PM. While the beans will have one overall winner, each meat category will have first, second, and third places. Prize money will be divided out based on the amount of entry fee money collected.

The Gary Cox Band takes at the stage at 5:30 PM for a free concert. The group performs country and classic rock.

The kids’ parade starts at 7 PM. Participants are asked to line up at 6:30 PM for judging in front of the American Legion Hall. The parade route is to the Llano River and through Badu Park. Children should dress in their most festive Fourth of July outfits and decorate their bikes, tricycles, or wagons in red, white, and blue.

First-, second-, and third-place prizes will be awarded.

Saturday night ends with another 45-minute fireworks show at dark.

For more information about the Llano Rock’N Riverfest, go to llanorocknriverfest.com or call the Llano Chamber of Commerce at (325) 247-5354.