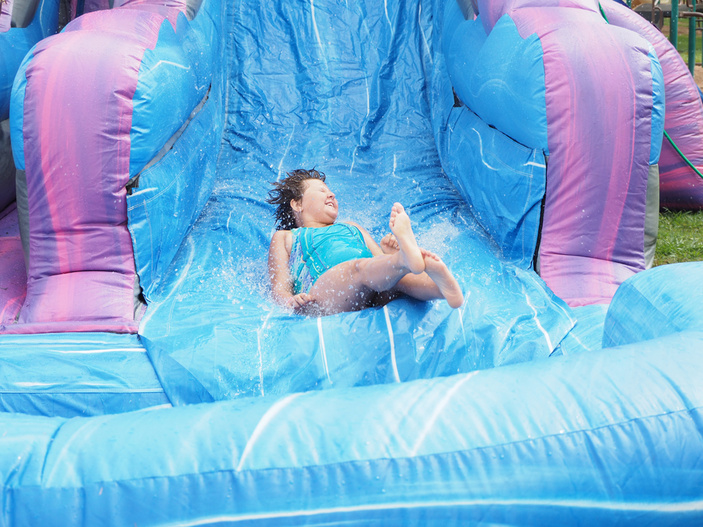 Llano's Rock'n Riverfest has plenty for families to do and see. Staff photo by Daniel Clifton

Adding to the rumble are fireworks shows at "dark-thirty" Saturday as well as the Wednesday before, which is Independence Day. The races and fireworks are free to spectators.

“It’s different,” he said. “It’s the (personal watercraft) engine on the watercraft that makes them eligible.”

And don’t be surprised to see a water skier being pulled by personal watercraft, Long added.

The cost to compete is $15, and people can sign up from 9-11 a.m. that day with races beginning at noon. It's not a sanctioned event, so amateurs and professionals are welcome.

Drivers must have a full-face helmet, a U.S. Coast Guard-approved life jacket, and a kill switch on their craft. Organizers will divide racers into classes based on the type of watercraft and its speed.

“We’re not going to put (professional drivers) up against someone who just started Jet Skiing,” Long said. “It’s for anybody who has a (personal watercraft) who wants to play.”

“We got the Jet Ski racing going, and we’re trying to make it bigger,” said Kim Webb, another organizer.

This year, organizers are creating a race layout that will challenge the craft’s speed as well as the driver’s skill.

“That’s entertaining for fans,” Long said. “We’re changing it up a little bit. They want to see more excitement.”

While the water races might be the big draw, they aren’t the only activity.

Saturday begins with the national anthem by Llano resident McKenzie Jones at 10:15 a.m. followed by the pet parade and the opening of the splash pad, a mobile zip line, the Spider Crawl, the Meltdown, kids fish tanks, and other games.

In the Spider Crawl, people climb a wall to retrieve a bean bag at the top. In the Meltdown, people stand on a platform and jump or duck to avoid a swinging arm.

Wristbands for the games are $20 each and good all day.

A classic car show is 10 a.m.-3 p.m. with prizes in multiple classes. There is no entry fee.

Master grillers are invited to compete in the Lonestar Barbecue Society cook-off and earn points toward the society’s championship. The entry fee is $150 for a four-person team to compete in all three meat categories: brisket, chicken, and pork ribs. The jackpot beans competition is $20, and winner takes all.

Signup for the kids patriotic parade is at 7 p.m. with judging at 7:30 p.m. Prizes will be awarded. Children can decorate their “ride,” which can be bicycles, motorized toy cars, wagons, or other modes of tot transportation.

The fireworks take off just after dark Saturday.

For more information, search for @LlanoRockinRiverfest on Facebook or go to llanorocknriverfest.com.