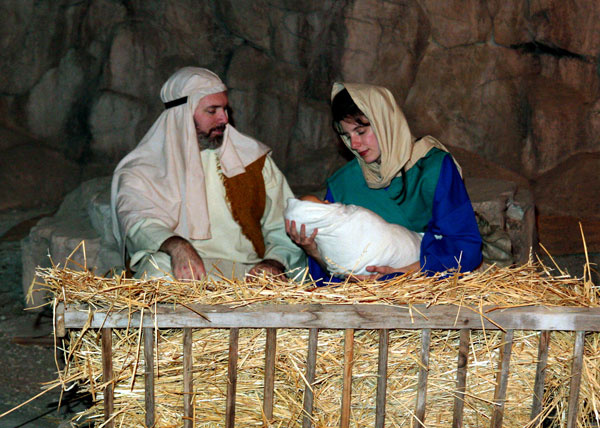 BURNET — A block away from First Baptist Church of Burnet is a place where the Bethlehem of 2,000 years ago comes to life, and people can experience Jesus’ birth.

Organizers will give away hot chocolate and cookies as folks come out of the living Nativity display. But it’s what happens inside the walls of the mock Bethlehem that makes this one of the most anticipated and highly attended events during the Christmas season.

“It’s a blessing to us to see the impressions made on people,” said Norman Leftwich, founder of Main Street Bethlehem. “It’s a production that’s true to the Bible – that’s what we strive for.”

While the 90-minute performances are free to attend, organizers have placed donation boxes for those who wish to make a contribution to help offset the costs of repairs, cleaning and other expenses associated with the production.

Organizers have decided not to allow attendees to bring backpacks, which is new this year, because of safety concerns.

About 20 different scenes from Bethlehem are featured including the inn that Mary and Joseph tried to check into on the night Jesus was born and the stable the couple went to instead.

“Some of that is depicted in a tasteful way and makes it as realistic and tasteful as possible,” Leftwich said. “They’re in a cave. People walk along and see them there.”

The entire production consists of 130 people acting out roles. They remain in character throughout the production, even when onlookers try to talk to them.

“It’s as if the entire cast is amazed at the number of people in the village and why (the spectators are) dressed in strange clothing,” Leftwich said. “We’ve had a lot of comments that people do see it as one of the most realistic portrayals of the first century Holy Land. Our training is to get people to stay in character. It makes it a little different (from other productions of the same content).”

This is the 23rd year the church has sponsored the event, which draws between 25,000 to 30,000 spectators during the six nights. Some of the same people volunteer with the production each year. They go through a training session and are given tips on what to say during the production. But most simply ad-lib instead of learning a script, Leftwich said.

“They say things to what’s appropriate to what the circumstances are,” he said. “There’s on-the-job training. They’ll catch on and learn the things to say that will be in character.”

Leftwich hopes Main Street Bethlehem leaves a positive impression on those who come to see it.

“We’re looking forward to another 23 years of passing the most important message that ever happened,” he said, “and we’re excited about it.”