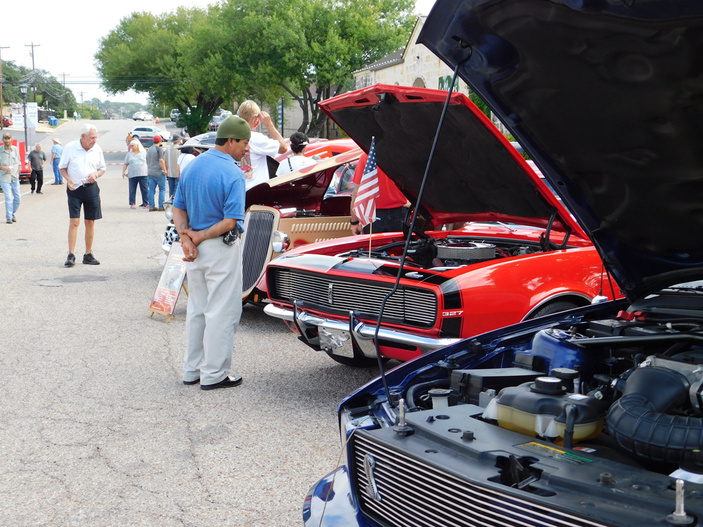 Jim Hower loves to talk about American muscle cars. He also loves to admire them and believes each vehicle says something about its owner.

“Cars are a way of life in this country,” he said as he leaned back in his chair and put his hands behind his head. “They started out as strictly utility. Then, they morphed into an emotional thing.”

He noted that car companies were constantly trying to create the next trendy vehicle to capture the attention of buyers.

While, he admitted, today’s vehicles have many modern conveniences such as cameras and video screens, wireless internet, power steering, power brakes, and power locks, they’re still not enough to overtake his love of the vehicles he grew up cherishing.

That might explain why people flock to see the classics and hot rods at the annual Main Street Car Show, which is 9 a.m.-3 p.m. Saturday, Oct. 6, on Main Street in Marble Falls. The event is held by Kiwanis Club of Marble Falls.

While there is no cost to spectators, there is a $25 charge to those who exhibit their vehicles.

“We want everyone to come out and have a good time,” said Hower, the event’s co-director.

Every person in attendance can vote for Best of Show and the top 19 vehicles.

The top winner will receive the Best of Show award. Awards will also go to second through fifth places. The remaining 15 winners will each receive participation awards.

There’s room for as many as 130 vehicles.

Every penny of the profits goes to student education and activities in Marble Falls. Event sponsors and donors are still needed.

Hower believes vehicles reveal the personalities of their owners. Dodge truck owners want diesel power, while Ford F-350 owners are the kings of the road.

“I have a 1978 GMC Jimmy pickup that’s in pretty good shape,” Hower said. “Every time I go gas it up, someone offers to buy it.”