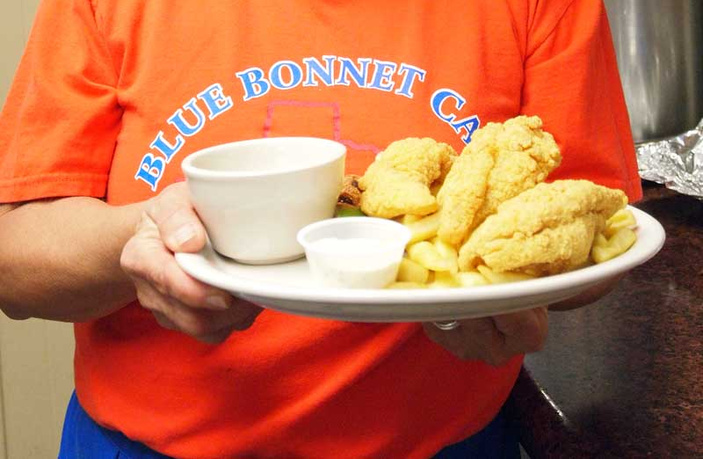 Let’s just say, it’s been a rather big deal.

“It’s huge for us,” said Johnny Campbell, director of the Marble Falls Area EMS Inc. “They’ve donated well over a $1 million over those 30 years to EMS. When the Marble Falls EMS was still starting out, those funds were incredibly important.”

The twice-a-year Blue Bonnet Fish Fry benefitting the Marble Falls Area EMS remains important for several reasons, including as a fundraiser. With more than 40 employees, Campbell said the unit uses the fish fry funds to cover personnel training, something that never ends in the world of emergency medical services.

But when the fish fry starts at 4 p.m. Wednesday, March 1, there’s another reason Blue Bonnet Cafe still does it.

“I think it’s just a great community event,” said David Plante of the restaurant, 211 U.S. 281. “We have EMS people here working and selling tickets. We also get people who aren’t with the EMS selling tickets and helping out. People still see it as a great community event where they can come out, support this vital service to our community, and it’s something people look forward to.”

Plante pointed out that things have definitely changed at the level of service regarding the local EMS.

“I wasn’t here back then, but John (Kemper) told me he remembered when the Marble Falls EMS wasn’t what it’s become,” Plante said. “It was just so important to him to support it.”

Kemper, a longtime advocate of emergency medical services and medical care for Marble Falls and the Highland Lakes, pointed out that the first fish fry in 1989 was to give the all-volunteer EMS unit a boost.

“When the Blue Bonnet Cafe started the fish fry in 1989, the Marble Falls Area EMS was an all-volunteer staff with few resources, and the closest hospital was Austin,” Kemper said. “The idea was to help support the service that is essential to our entire community. The EMS was struggling. We wanted to change that.”

“John cooks the fish, and Belinda cooks the fries,” he added. “It’s great to see our staff working alongside the EMS and even other community members and leaders helping out. I think it all goes back to it being a great community event that supports an organization that is so important to the community.”

Campbell agreed, adding that he and the EMS staff are always thankful for Blue Bonnet Cafe, the Kempers, the Plantes, and the community for making it all possible.