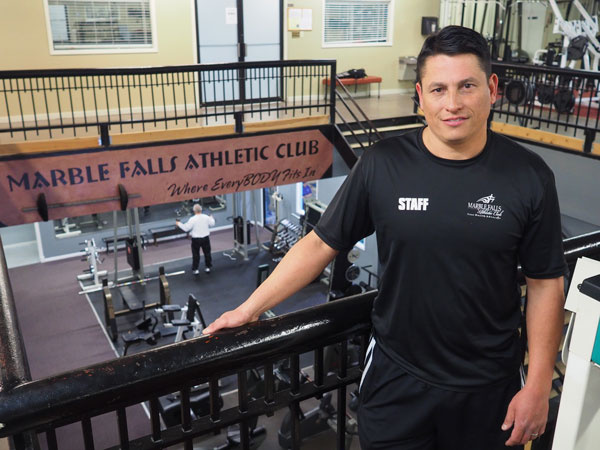 Patrick Bonner was on the ground floor when the Marble Falls Athletic Club opened almost 20 years ago. Now, effective Jan. 1, Bonner is the club’s owner. Staff photo by Daniel Clifton

MARBLE FALLS — While the Marble Falls Athletic Club has changed owners over the years since opening in 1997, one thing is constant.

"There's a saying that goes something like, ‘If you find something you love and can make a living at, well, you've found your calling,’” Bonner said. "And I love this. This is just fun helping people get healthy and stay in shape."

Bonner started in 1997 as the lead personal trainer when he joined then-owner Fermin Ortiz at the athletic club but has donned many more hats over the years including as manager.

"I was blown away when they asked me," Bonner said. "I was just so honored they would consider me. I'm just incredibly grateful."

In October, Rick Coleman on behalf of his wife, Rhonda, who owned Marble Falls Athletic Club, approached Bonner about purchasing the facility. There was no hesitation from Bonner or his wife, Mindy Martinez — of course, he would love to buy the club he's been part of for almost 20 years.

"As manager, I know all the ins and outs of the club, what works and what doesn't," Bonner said. "So, no, I'm not that worried about taking on the ownership."

Instead, he's excited. And judging by the number of congratulatory calls he received in a half-hour span, the community and club members seem excited as well.

Rhonda Coleman will remain the owner of Balance Sporting Goods, which is located in the club.

Bonner has made one big personnel change, though.

"Yeah, l've brought my friend and longtime mentor Fermin (Ortiz) back," he said.

Ortiz opened the club after building a health and fitness career in Austin. He then asked Bonner if he was interested in joining him at the new Marble Falls Athletic Club.

Even after the facility switched ownership twice more, Bonner never wavered in his commitment to the club and its members.

In a business that's ever-changing, Bonner said focusing on the customers’ fitness goals is his top priority. Whether it's offering regular physical assessments, goal reviews or a plethora of classes, it's all about helping people be successful at becoming and staying healthy.

The club offers a variety of strength, cardio and fitness equipment. Bonner is also eyeing some improvements. Some of the recent additions include an Olympic weightlifting platform and battle ropes for those interested in a Cross Fit-style of workout.

"The biggest thing for us is the number of classes we have," Bonner said as he rattled off a long list. "That won't change."

While the buck definitely stops with him now as owner, Bonner doesn't mind. He loves the idea.

"This is just so much fun," Bonner said. "This is a happy place; people here are happy; I love it."

Patrick and Mindy make a good team as the new owners. These guys arre real at caring about your fitness, you can meet/talk with them any day. This personel service is what i have been looking for in a athletic club. they are a blast to work with.

Patrick & Mindy, I am so happy for you guys! Blessings to You!