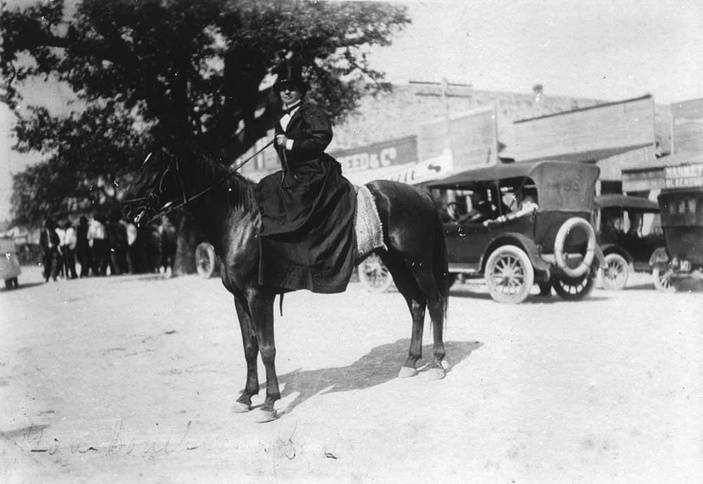 Along with being the first female mayor elected in Texas, Ophelia 'Birdie' Crosby Harwood was known for her horsemanship. Courtesy photo

MARBLE FALLS — One hundred years ago, on April 2, 1917, Ophelia “Birdie” Crosby Harwood of Marble Falls became the first woman to be elected mayor in Texas — before women even had the right to vote.

To celebrate that major milestone, current Mayor John Packer will read a proclamation detailing her lifetime achievements during an April 4 city council meeting. The meeting begins at 6 p.m. that Tuesday in the city council chambers at City Hall, 800 Third St.

That same day in Burnet, the Burnet County Historical Commission will honor Harwood as a Woman of Note in Burnet County at 10:15 a.m. at the Episcopal Church of the Epiphany, 601 North Wood St. (at the corner of Lamon St.) in Burnet.

Grandchildren Mary Ann Arnim and Thomas Harwood of Uvalde have been invited to join the community in honoring Mayor Harwood. Another grandson, Crosby Harwood, now deceased, might be represented by his daughter, Sarah Will. Commission member Caryl Calsyn of Marble Falls wrote the tribute to Harwood, who gained fame for her horsemanship as well as her politics.

In a March 1917 article in the Marble Falls Messenger, Harwood stated her reasons for running for mayor: “A woman's first duty is to her home and children. When she has raised them up … no good woman is out of place doing those things which are so vital to her children and her home.”

She especially wanted a clean town. With uncanny foresight in speaking of Marble Falls’ future, she said, “We have everything about us to make (our town) one of the beauty spots of our state. Our citizens are the best. Let's welcome the stranger within our gates, but first, let us get our house in order.”

Harwood was born in 1872 on a ranch in Blanco County. Her father, Charles A. Crosby, was the Blanco County clerk after fighting in the Civil War for the Confederacy. Crosby later held a similar job in Pecos County. After Birdie married Dr. George Harwood in Fort Stockton in 1892, the young couple returned to the area and settled in Marble Falls in about 1900 with their three sons, Charles Gerald, George C., and Clarence Adolphus Harwood. All three sons served their country during World War I.

According to an interview with Crosby Harwood in 2000, “My grandparents owned the house now called Liberty Hall, a cottage that used to stand next to it, and the 'river house,' a two-story house closer to the bluff above the river. My grandfather's office was on Main Street.”

Dr. Harwood died in 1934; Birdie Harwood passed away in 1954. They are buried in Marble Falls City Cemetery near their son George C. Harwood and her mother, Ophelia Crosby.

Family members are invited to visit the Falls on the Colorado Museum, which has photographs of Harwood on horseback, riding sidesaddle in parades in Marble Falls, and at “The Battle of Flowers” in San Antonio. Family members have donated several of her dresses and other personal items, which are also on display.

The museum, located in the historic granite school building at 2001 Broadway in Marble Falls, is open 10 a.m.-4 p.m. Thursday-Saturday. Call (830) 798-2157 for more information about the Harwood collection or other exhibits.

This article was written by Jane Knapik.