Calling all racers for Downtown Derby 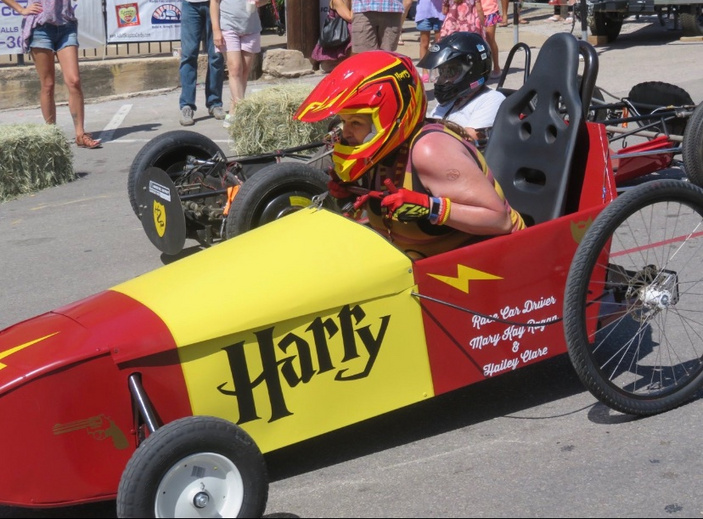 Mary Kay Ragan’s soapbox derby car Harry is an example of what racers can build for the Downtown Derby, which is Oct. 30-31 in Marble Falls. Courtesy photo

Calling all racers for Downtown Derby

Racers should start warming up for the Downtown Derby in Marble Falls on Oct. 30-31. The event takes place on the Third Street hill below Main Street.

Four divisions are open to all racers: speed, masters, twister, and maiden voyage. A powderpuff division is open to women. Participants can enter multiple divisions at $40 each. Registration is online.

Ragan, a family nurse practitioner, began soapbox racing in 2016 at a previous Marble Falls event. She didn’t have car-building knowledge at the time, but was able to fashion her first soapbox car from two bicycles and an old oil drum for $227.

“After you build one, you just keep making adjustments and doing things to make it faster,” Ragan said. “You don’t need to build something really expensive to get started.”

But once you get racing fever, you might become obsessed with improving, she said.

“It’s really kind of crazy, but I spend just about every moment I have making it go faster,” Ragan said.

Since her first car, she has added two others.

Derby racing is not just about speed, it's also about community, Ragan said. When she started out, she was full of questions, and the best answers came from fellow racers and competitors.

“Everyone is really supportive and loves to help out,” she said.

Soapbox racing is a nice break from everything else going on in the world, she continued.

“It’s really not that difficult to get started,” she said. “You don’t have to spend a lot of money, even less than what I did on my first car. It’s so fun, and it’s exciting. If you’re interested in trying, go for it. We have a place for you on the hill.”

Racing rules are available on the Downtown Derby website. Volunteers are also needed. Email Ragan at downtownsoapboxderby@gmail.com for more information on volunteering or the race in general.