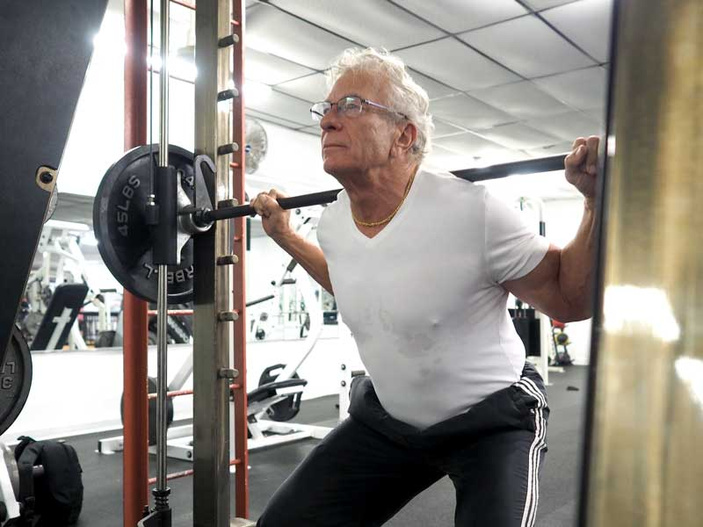 Ed Thompson, 71, does some squats during a workout at the Marble Falls Athletic Club. A little over a year ago, Thompson entered the world of competitive bodybuilding. He’s still going strong as he returns June 10 to the Texas Shredder Classic, the site of his first competition last year. After that, it’s the Europa Games in Dallas on June 17-18, and the big show, the Masters National Championships on July 19-22 in Pittsburgh. Staff photo by Daniel Clifton

MARBLE FALLS — When 71-year-old Ed Thompson asks trainers at the Marble Falls Athletic Club for their assessment of his workouts or physique, he’s not hunting for accolades.

“I want them to be honest, brutally honest,” Thompson said. “That’s what I need. And, they are. They’ll say, ‘Ed, you probably could lose 10 pounds …”

Most people wouldn’t invite such critiques, but Thompson depends on them. Last year, the former professional tennis coach and tennis academy operator decided to return to bodybuilding, the sport in which he first began pulling his weight (and more) while in his late teens and early 20s. It was a chance for another shot.

His first competition was the Texas Shredder Classic, which he returns to June 10 at the Wilhelmina Delco Center in Austin. He won his most recent competition, the Phil Heath Fit Expo on April 29 in Arlington, but Thompson’s not satisfied. He’s always trying to get better, even if the average person can’t see the results.

“I feel like, at each event, I’m tightening the bolts a little bit,” he said. “Somebody might not see it, but it’s there. … Just a few tweaks.”

Competitive bodybuilding has two areas on which contestants concentrate. The first is the most obvious: physique. Thompson trains six days a week at the Marble Falls Athletic Club, often up to 3½ hours a day. He splits his training over the week, focusing on different body parts.

This is when he pushes himself while leaning on athletic club trainers such as Adam Brust for their honest input. They don’t stroke his ego and say, “You’re looking great! Keep going.” Thompson said they give him their honest, unfiltered expert opinions, which is what he needs if he wants to excel and make the world championships next year in Warsaw, Poland.

“The people here at (Marble Falls Athletic Club) are so supportive of me and really help me out,” Thompson said.

The other portion of bodybuilding is posing. During competitions, athletes execute a choreographed routine that takes them through a number of poses. For this, Thompson turned to Dave Goodin, a master physique champion and trainer.

With the Texas Shredder Classic around the corner and the Europa Games and Expo a week later, Thompson can’t slow down. He has to keep up that pace even with a month between the Europa competition and Masters National Championships in Pittsburgh on July 19-22.

A win at nationals would earn him a spot at the world championships and an International Federation of Bodybuilding and Fitness pro card.

No, Thompson won’t relax in the month between Europa and nationals.

At 71, with a successful 40-year career in tennis behind him, Thompson could slow down a bit, but he sees bodybuilding as a way to get back to his athletic roots. It also gives him a goal.

“It’s an injection of new life,” Thompson said about bodybuilding. “I enjoy the heck out of it. I have something moving me forward to be excited about, and a challenge. I know I’m going to run into someone who’s working just as hard or harder, so I don’t get enamored with myself.

“If I’m 71, there’s somebody 70 who’s coming in this year. And next year, when I’m 72, there will be guys 71 and 70 coming in,” Thompson added. “So I have to keep working, keep moving forward and getting better, because you know they are.”