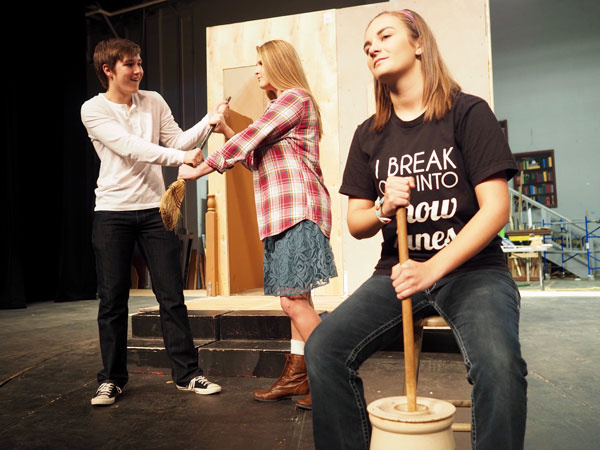 Alyssa Anderson (front) portrays Aunt Eller in the upcoming Marble Falls High School choir department’s production of ‘Oklahoma!’ Behind her, Wolf Williams, who plays Curly, and Blair Hambrick, who plays Laurey, get ready for the production, which takes the stage Jan. 21 and 23-24, 2016. Tickets go on sale Jan. 6. Staff photo by Daniel Clifton

MARBLE FALLS — It was his first musical after arriving at Marble Falls High School 10 years ago, so choir director Bryce Gage thought it was the obvious choice for this year.

With rehearsals in full swing, the Marble Falls High School choir department is returning to “Oklahoma!,” the musical by Rodgers and Hammerstein, Jan. 21 and 23-24 in the high school auditorium. While the opening date is still several weeks away, Gage and his staff and students are hard at work to make the musical their own though the director plans to remain as close to the intentions of Richard Rodgers, Oscar Hammerstein II and original choreographer Agnes de Mille as possible.

“Once I settled on ‘Oklahoma!,’ I watched YouTube video after YouTube after YouTube of any and every ‘Oklahoma!’ production — good ones, bad ones, college ones, professional ones — I could,” Gage said. “I also watched interviews of Rodgers, Hammerstein and de Mille so I could stay as close to what they intended as possible.”

Of course, Gage tapped into his own experience with the musical, both as a director and, before that, a performer.

Set in the early 1900s and written in the 1940s, “Oklahoma!” might seem a bit irrelevant in today’s high-tech, fast-paced world. But Gage disagrees.

“The show is about home and our native land, where we’re from,” Gage said. “It could have been set in Arkansas, New York City or anywhere. It’s just about home.”

Gage pointed out that the musical debuted in the midst of World War II when the country was in turmoil. The country was looking for a way to remember and reconnect with itself, and the production was a simple and fun look at what makes each person’s hometown special and grounding. The musical is, of course, set in a Oklahoma, but it could have happened anywhere.

Even in today’s world, the importance of home is undeniable for students and the community, Gage said.

“Plus, it’s just a a great musical,” he said as he began reeling off song after song from the play. “It’s like a Rodgers and Hammerstein greatest hits.”

The story comes alive during the early 1900s as farmers and settlers begin pushing into western Oklahoma but find themselves at odds with the cowboys, who prefer a more open land. This is the setting for the bumpy love story of cowboy Curly and local farm girl Laurey.

Among all this is a unique cast of characters.

While the main theme revolves around home, Gage said the story is about everything that goes into making it in life and being successful no matter what path a person chooses.

“The whole idea of having to work with a combination of different personalities is just as important today as when Rodgers and Hammerstein wrote the musical,” Gage said. “And there’s so much emphasis on work, hard work, and how important it is and getting through those tough times.”

Even today, Gage pointed out, hard work remains one of the important parts of being successful.

“We don’t all have the same gifts and talents,” he said. “But how hard we work, that’s something we each decide. And I think that’s one of the important things people can learn from this story and these characters.”

It’s also something he stresses through interactions with his students, though many already have a firm grasp on the concept. Successfully tackling the songs and choreography of “Oklahoma!” highlights the importance of effort and hard work. But the choir and theater art students taking up the challenge aren’t daunted.

“I have ‘make-it-happen’ kids,” Gage said. “They know what they have to do, and they come in and do it.”